Don't touch the Crown of Thorns!

This starfish (Acanthaster planci) has its meaningful name for a reason! However, if you did, go to hospital right away. You will need immediate medical attention. Waiting only makes it worse!

It’s a beautiful sunny day and Nelly*, a dive instructor, takes her four experienced divers for a dive along a spectacular wall close to the dive resort, located in one very remotely tropical island in South East Sulawesi, Indonesia. The dive is very nice and relaxed, without any current. All goes well until, towards the end of the dive, while turning around to signal the divers to go up after the safety stop, Nelly accidentally hits a crown-of-thorns starfish with her right hand’s index finger and gets stung deeply by three venomous spines. On board she removes the spines, cleans her hand, putting it in hot water and finally disinfects the wound with Betadine. The pain is excruciating. Despite this first aid treatment, on the following day her finger is worse and swollen. As the island is very remote, there are no doctors. However, she doesn't call DAN immediately and starts a self-administered treatment, first with Ibuprofen and later during the night, with a penicillin-like antibiotic, as her finger is getting worse. Still, considering the circumstances, Nelly is quite well-off: no nausea or vomiting, and her wounds are small, affecting only half of her index finger with adjacent swelling of the hand.

As the antibiotic cannot act effectively at this stage, her finger is even more swollen the next day. An American surgeon among the guests says she needs to fly to Bali for decent hospital treatment if the finger isn’t getting any better within the next 24 hours. However, quickly leaving the island is a challenge. Planes come and go only once a week. But Nelly is lucky. Only three days after the incident there is a plane to Bali: she now contacts DAN Europe and, after authorisation to cover her travel and medical expenses, she takes off.

Once in Bali, she visits the international hospital in Denpasar. They diagnose a secondary infection due to contact with marine life and prescribe her more antibiotics (clindamycin) and an army of painkillers.

Within the next two weeks she has to stay in Bali as outpatient and returns to the hospital several times. The secondary infection has built an abscess which they have to open and conduct a lab examination upon. Despite the antibiotics, the finger isn't getting any better. An X-ray finally reveals that there are still traces of spines embedded in her hand's soft tissue! Over the following four days the finger is cut open twice and more antibiotics and painkillers are prescribed. Nelly still can't fly back to Sulawesi and has to get back to hospital for an emergency treatment.

Finally, three weeks later, with the doctor’s 'OK' Nelly is on her way back to the little island and starts diving again.

A month later, Nelly is back at the hospital in Bali for a follow-up visit on the wound debridement. Situation has worsened: her finger is still stiff, red and swollen, and she feels pulsating pain. She has kept applying antibiotic ointment and two of the three wounds have actually healed, but the third one is giving her trouble. Movement of her finger is limited, she feels numbness, but, luckily, there is no pus in the wound. The hospital's surgeon needs to check if a foreign body is still inside the tissue. A new X-ray reveals that there is still a foreign body inside the soft tissue of Nelly’s finger, causing the swelling and ongoing inflammation.

Again, another 14 days(!) as outpatient in Denpasar. An orthopedic surgeon re-opens the wound. Luckily, no osteomyelitis – infection of the bone – is present, but the story has been dragging on for almost two months now… and this all because of three little spines. 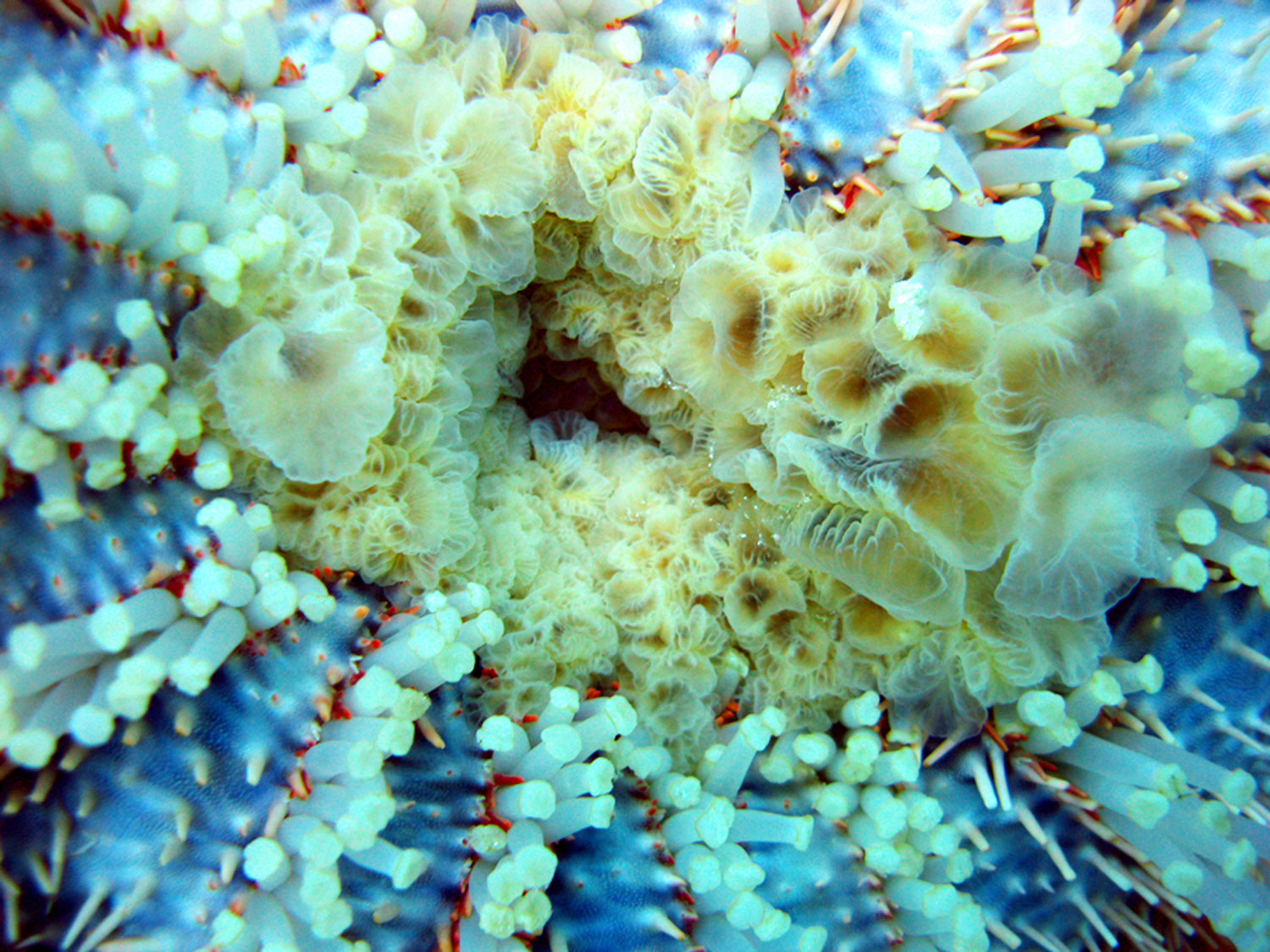 Five months later, in Italy, it's just another busy workday in the life of Julia S., Case Manager at DAN Europe, who has now started reading her emails. At the same time, in a small, beautiful island on the west coast of Thailand, a diving paradise, Tessa, a Finnish dive instructor is in despair. During her dive she accidentally hits a crown-of-thorns starfish with her entire arm. Her hand starts bleeding heavily. Shortly afterwards it becomes numb with really hard pain. Nausea starts within a few minutes. On the boat, she puts her hand and arm in hot water for an hour. However, the hand is swollen and the skin marbled all the way to the elbow. Back on land, she seeks help at a local clinic. The doctor prescribes her antibiotics but has no idea of what the crown-of-thorns is. Tessa is being treated as if she had touched a sea urchin.

Later, back in the resort, she decides to send an email to DAN Europe about her injury, and it's Julia who receives it. When she reads “stung by the crown-of-thorns starfish”, she immediately remembers Nelly’s case and is instantly on high alert. She grabs her phone and calls Tessa to check her current status: her voice is very weak, she can’t even stay awake. Julia gets the impression that the girl is close to faint, and tells her that she needs to seek decent medical help in Phuket, immediately. Julia remembers Nelly's case and, aware of the much larger injury Tessa has, she knows she has to act quickly. What she usually does in an emergency like this, is calling ‘Doc’. No matter if day or night, Sunday or Christmas. This one goes directly through to Alessandro Marroni, President, CEO and Chief Medical Officer of DAN Europe, one of the most experienced Diving Medicine Specialists in the world. Prof. Marroni gives Julia immediate authorization to an urgent medical evacuation, as he fears Tessa will go into anaphylactic shock, a possible and life-threatening allergic reaction to the starfish’s venom.

However, meanwhile in Thailand, after an awful night with increased pain, nausea, vomiting, extreme sleepiness and headaches, Tessa’s friends take her to another doctor in what is called a first standard clinic close by. Unfortunately, not even this doctor knows the crown-of-thorns starfish, but he looks it up on Google. Tessa gets another antibiotic, this time applied intravenously, and is told to come back and repeat this treatment within the next few days. She is actually running out of time and options.

At the same time, at DAN Europe’s offices telephone lines between Italy and Thailand are running hot. Tessa’s evacuation is being organized, there is just one piece of information still missing – the address. Where exactly is the girl staying? If the ambulance can't find the girl, the mission will be lost – and Tessa possibly too.

Fortunately, however, everything runs smoothly this time, and Tessa wakes up in a bed at the Intensive Care Unit of the international hospital in Phuket – evacuated by DAN Europe, as ordered by two very concerned people, who did their job well – Julia and Doc Marroni. A good morning – back in safety.

The ambulance had arrived the night before, they put Tessa on an intravenous drip and brought her, escorted by a nurse, to the hospital in Phuket, where the following medical treatments were fully covered by DAN.

She received all medical attention she needed, as her symptoms were serious (nausea, vomiting, drowsiness and fever), her left hand and wrist were swollen, she suffered severe pain and her arm, hand and fingers were paralyzed. Lymphagitis and left axillary lymphadenitis were present – a signal that her immune system was pretty occupied. A surgeon opened the wounds and removed all thorns. She was on heavy medication with dexamethasone and clindamycin given intravenously, every 8 hours. Since she had lost a lot of fluids, she was also put on an IV drip for fluid replacement. Later she was able to start moving her fingers again.

At hospital discharge – 6 days after the incident – Tessa’s hand was still numb but she felt happy again. The bill for her 5-day inpatient treatment amounted to 6,000 EUR. Amazing, the huge costs a little starfish can cause! There will still be numbness in Tessa’s hand a couple of months later. Even five months after the injury occurred, two fingers had not regained sensitivity yet. Healing is a long process.

Tessa’s nine-page-long medical report and the extensive list of different drugs demonstrate that the hospital in Phuket took really good care of her. One more proof that DAN Europe’s international emergency, medical and assistance network is in excellent shape. This network was created and is still managed by the people from DAN Europe who strive to do their best, just like Julia, the Case Manager. She speaks several languages, she is a certified dive instructor and has travelled the oceans around South East Asia many times. It takes people like Doc Marroni and Julia to make a difference and make things happen – even from a distance. In an emergency, quick decision-making, good judgement and experience is crucial for an effective case management. These people spared Tessa a lot of pain, unnecessarily prolonged suffering and debilitating, life-threatening illness. They act likewise and do their best in any other case, in any emergency. 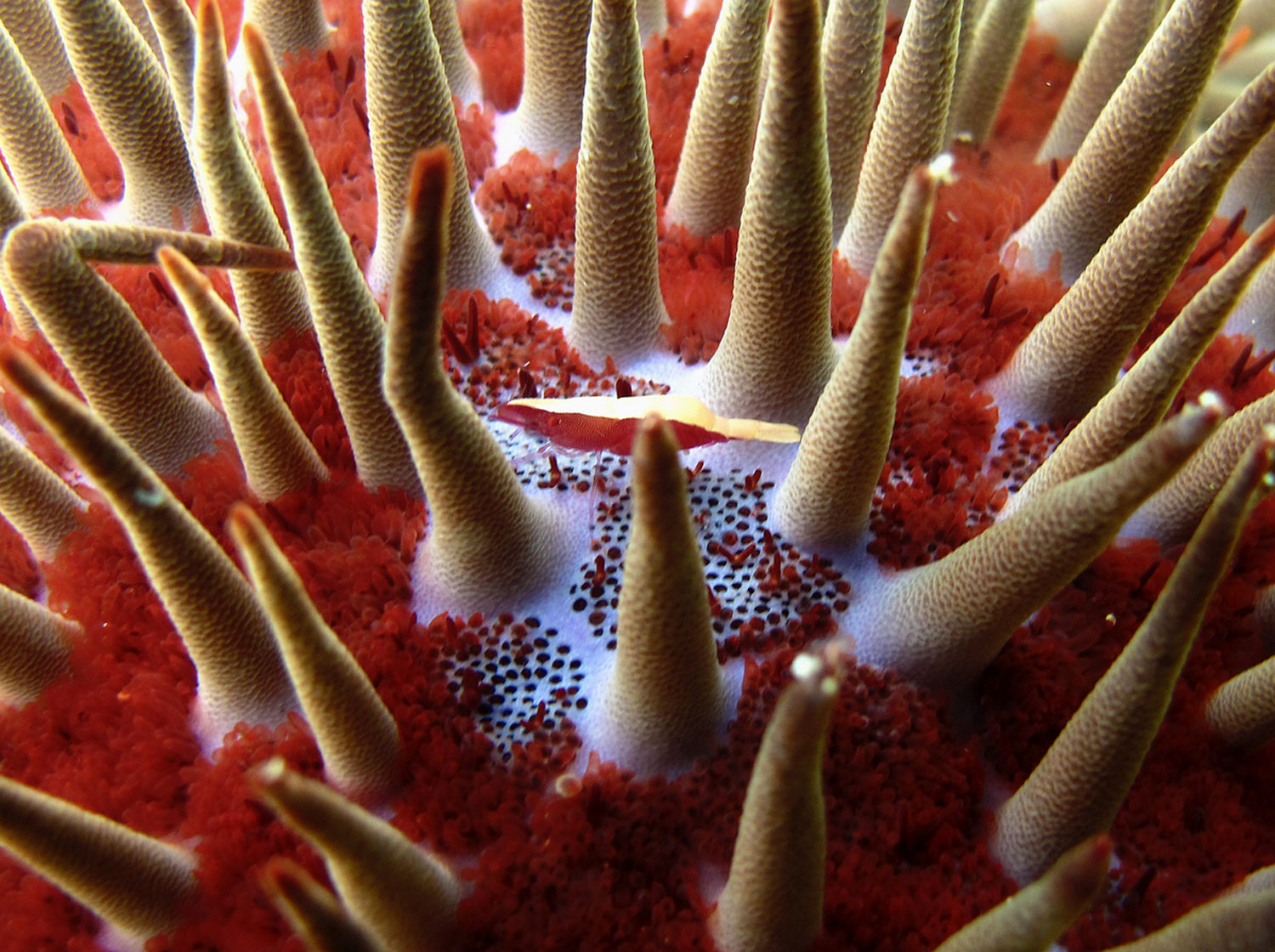 Put your health first. Take an incident with the crown-of-thorns starfish seriously. Seek help immediately. Otherwise, it will get worse and then you may not be able to travel to a decent hospital by yourself anymore. Debridement of spines is mandatory. Spines can only be located by ultrasound or X-ray. The wounded side will swell quickly. Needless to say, this kind of injury stops any scuba diving activity.

There are obvious limitations of self-treatment in an incident with the crown-of-thorns starfish. An injury like this will require surgical intervention, always. The spines easily break off and stick in the tissue, releasing the venom. The inflammation is ongoing because the body tries to get rid of a foreign body and fight the venom at the same time. Nelly’s story shows that the wound will not heal as long as the foreign body (filled with venom) is still inside the tissue. On the other hand, Tessa’s case shows that quick and adequate medical intervention can shorten the suffering effectively.

Other names: Sea Star or Venomous Starfish. Being littered with some 6 cm long and sharp spines, filled with venom, it looks pretty vicious. Its 6 to 23 arms and average diameter of 40-60 cm add to this appearance. Its mainly red color may be understood as a warning sign related to its venomousness. Its effective defensive system makes it to an impressive survivor with almost no predatory enemy of its own. Its home is where the most beautiful dive spots are – in the tropical zones of the entire Indo-pacific (Philippines, Indonesia, Great Barrier Reef in Australia); besides this, it is also found in the Red Sea and Central American coastal areas, generally in coral reef regions. Beware! This starfish means double trouble. Prevention is your best friend. You may protect yourself by wearing shoes and/or boots, gloves, other protective clothing, like thick neoprene.

Cortisone (ointment) is a possible first aid self-medication that can be used to mitigate the symptoms of a contact dermatitis from touching the starfish’s spines.

* Some names have been changed

Have a closer look at the DAN Europe training courses, including DMT (Diver Medical Technician) and HMLI (Hazardous Marine Life Injuries).  Also check out the First Aid products in the DAN online shop: First Aid kits/cases/backpacks of different sizes, and much more.