It’s The Metabolism, Stupid: A New Model for Bubble Formation

The risk of decompression illness (DCI) following a dive has been attributed to the presence and quantity of gas bubbles called “vascular gas emboli” (VGE) circulating in the blood. These are thought to develop from smaller precursor bubbles or “gas micronuclei” which form as a result of gas supersaturation. Recently DCI has also been associated with the presence of blood microparticles and symptoms linked to an inflammatory process. However, to date, there is much we still do not know about the exact mechanisms that give rise to these pathologies.

Post-dive VGE levels can be quantified through ultrasound Doppler and precordial echocardiography and have been used as an indication of decompression stress, though “silent” VGE bubbles can be present without resulting in DCS.  In addition, for a given dive, VGE monitoring shows wide variation among individuals suggesting individual susceptibility is at play.

In fact, researchers have known for a long time that certain people are prone to bubbling and DCI while others appeared “bend-proof.” The same diver can also exhibit variations in VGE for a given dive, which may be influenced by recent pre-dive conditioning. None of these variations are explained by current decompression models.

Now, in a new paper, “Static Metabolic Bubbles as Precursors of Vascular Gas Emboli During Divers’ Decompression: A Hypothesis Explaining Bubbling Variability,” which draws from seminal decompression research from the last few decades, veteran decompression engineer JP Imbert and colleagues from DAN Europe research division propose that divers’ individual metabolic processes modulate the presence and volume of “Static Metabolic Bubbles” (SMB), which in turn act as precursors to circulating VGE after the dive.

Their new model supports both individual variations and the differences observed in pre-dive, pre-conditioning experiments, and in addition, sheds light on the source of blood microparticles.  It also explains the observed variability in VGE based on age, fitness and dive stress, which were identified as key risk dive factors in a recent analysis of DAN Europe DSL diving database. 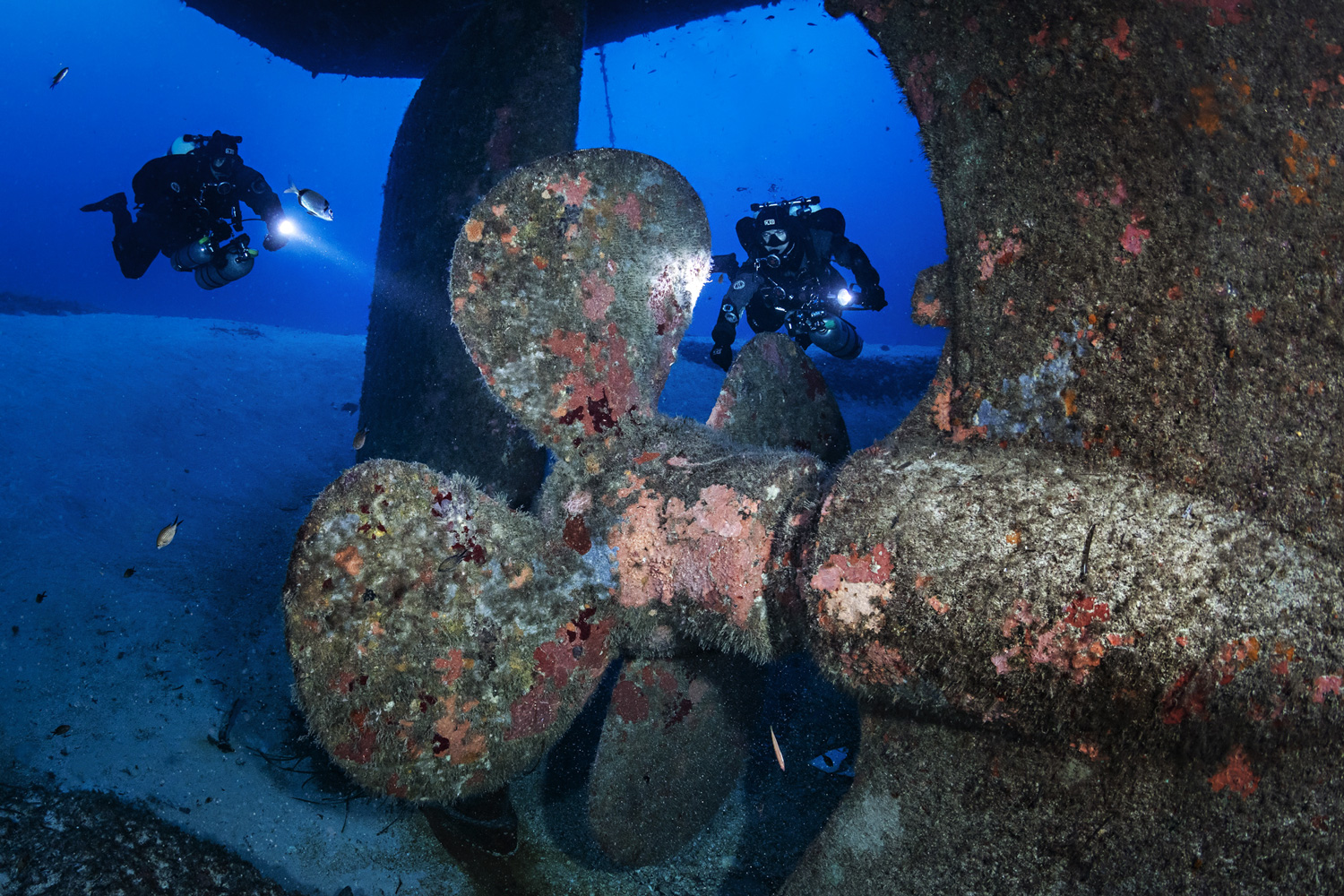 The authors’ metabolic model builds on the pioneering (1967) work of Brian Hills on bubble cavitation in physical and biological systems, and more recent work of Israeli researcher Ran Arieli and colleagues. Arieli showed that diver’s decompression bubbles can only develop from pre-existing gas micronuclei and that these could be the nanobubbles that appear on active hydrophobic spots (AHS) found on the endothelial surface, or lining, of blood vessels. Arieli was able to observe the dynamics of bubble production, growth and detachment and derived a mathematical equation for conditional detachment, which he based on buoyancy, and therefore, on reaching a critical bubble volume.

The second underpinning of the model is the surprising research conducted over the last decade on diver pre-conditioning that has confirmed that stable, stationary nanobubbles are most likely already present in divers before they dive. Recently co-author Costantino Balestra showed that pre-dive vibrations, for example as a result of exercise, better protect the diver than pre-dive oxygen breathing in terms of post dive VGE count. The research suggests that mechanical, pre-dive vibrations dislodge these miniscule pre-dive bubbles before they can grow. More on this later.

Imbert and company’s key insight is to postulate that it is the diver’s own metabolism that is responsible for the existence and variability of a population of small gas pockets, called “Static Metabolic Bubbles,” or SMBs, in their tissues before they start the dive. The formation of SMBs is a result of well known “Oxygen Window,” (OW) as originally defined by Albert R Behnke (1967), and also referred to the “inherent unsaturation of tissues,” or “partial pressure vacancy.”

In simplest terms, the OW is the pressure difference between the gas phase pressure in divers’ alveoli, which is in equilibrium with ambient pressure, and the lower gas phase pressure in their venous tissue, that results from active metabolism i.e. O2 consumption and production of CO2. The pressure is lower because CO2 dissolves more readily in plasma than oxygen, creating a “void” in the sum of partial pressures in the venous side of the tissue. As a result, our metabolism is responsible for around a 70mbar pressure difference between the venous side of tissue and ambient pressure. Breathing higher PO2 mixes further increases the magnitude of the OW.

The authors propose that it is this pressure gradient that drives and sustains the population of minute static metabolic bubbles when the diver is at the surface. They derive a mathematical equation that characterize their form, volume and dynamics, and conclude that these SMB gas pockets, which are likely not spherical, evolve to an intermediate volume between nanobubbles initially cavitating at AHS sites and VGE.

The equation above is a simplification that links OW to the stability of the SMB once they have formed and reached a certain size. It is a derivation of the Young-Laplace equation that describes the capillary pressure difference sustained across the interface between two static fluids such as water and air due to surface tension.

In this case, Pamb is ambient pressure and Pb is the venous tissue pressure. Vb is the volume of gas in the SMB and α is a coefficient related to the system. The coefficient τ characterizes the interface, similar to surface tension. The coefficient m represents the thermodynamic dimension of the subsystem and is less than one.

Once the diver enters a decompression state, the dynamics of gas exchange will feed the existing SMB by diffusion of the adjacent tissue. The SMB will grow until they reach critical volume for bubble detachment and generate blood-borne bubbles. The level of VGE will therefore depend on:

Note also that as the SMB reach critical volume and detach from the lining of the blood vessels, they are thought to break off microparticles, which may then pass through the lung and heart filters and evoke an inflammatory response, which is the other dimension of DCI.

According to the model, the pre-existing gas pocket population as defined by the number of active sites and initial SMB volume, becomes the diver’s main individual characteristic defining the VGE level measured during or after decompression, and may also contribute to inflammation. Accordingly, this could be the reason for variability in VGE production observed between divers.

Metabolism is known to decrease with age. According to the equation above, a decreased metabolism would lead to a decreased OW, and therefore a larger initial volume of SMB. This could explain higher levels of VGE in older divers.

Similarly, metabolism is known to be linearly related to cardiac frequency at rest, and its log proportionate to that of body mass. This suggests that fitness increases the OW. Accordingly, this would result in a smaller volume of SMB, which would take longer to detach and produce fewer circulating bubbles, which would explain lower levels of VGE in fit divers. The combination of age and fitness could also introduce increased variability.

Interestingly, in the recent analysis of its DSL diving database, DAN Europe researchers concluded that only two factors, increased age and Body Mass Index, could be related to increased bubble formation. In addition, the study found that stressful situation during the dive, such as cold or low visibility, have shown to be related to higher risk of DCI. Though it remains to be quantified, stress is known to trigger a series of physiological reactions including oxygen consumption and metabolic rate, which could undoubtedly impact the population of SMB and hence VGE production.

The model also provides some insights into recent work on diver pre-conditioning. Preconditioning divers with mechanical vibration before their dives has been shown to reduce VGE after decompression. The main role of vibrations in the model would be to detach SMB, and consequently reduce the number of VGE bubbles produced.

Conversely, pre-breathing oxygen, which also reduces VGE, drastically increases the OW and consequently reduces SMB volumes. Smaller gas pockets would take longer to grow and reach great volume for detachment, resulting in fewer VGE. If oxygen breathing is conducted before vibrations, the SMB will become smaller and more difficult to detach. Following an oxygen pre-breathe with vibrations may therefore only detach the biggest SMB, and so not be as efficient as vibrations alone.

Finally experiments with extended bedrest meant to simulate microgravity during space travel, followed by air dives to simulate extravehicular activity, significantly increased bubble grades after decompression. This is consistent with the model. Bedrest is associated with minimal activity and therefore minimal metabolism, which would reduce initial SMB volumes. The lack of exercise and therefore vibration, would also result in a maximum number of AHS sites. Divers would therefore begin with a high density of SMB with maximal volume, which would produce high VGE scores.

As mentioned above, the link between the presence of VGE in the venous blood and the risk of DCI is not direct. However, we know that the lower the bubble count (or grade) the lesser the risk of DCI. The authors conclude that the dose of the incoming VGE and the lung filtration capacity determine the possibility of arterial bubble occurrence and therefore DCI. As discussed, the detachment of venous bubbles may also create microparticles, which can pass into the arterial system and provoke tissue inflammation similar to that caused by bubbles.

According to the authors, setting acceptable levels of DCI risk in future algorithms will require defining four additional parameters:

Further improvements could consider the evolution of the number of sites and SMB volumes with repetitive diving and multi-days diving. It may also be possible to supplement M-Values and gradient factors for existing decompression algorithms based on an initial SMB population adapted to the diver’s individual parameters.

It should be noted however that new algorithms, based on individual diver characteristics, will not necessarily produce much different decompression profiles. Current profiles were developed empirically but already provided an acceptable level of risk. Today the risk of DCI ranges from 0.01–0.1% per dive (the higher end of the spectrum reflecting rates for commercial diving and the lower rates for technical, scientific and recreational diving). Even so, the majority of DCI incidents occur within the limits of existing decompression algorithms, for reasons as yet unknown.

However, a new metabolic-based model could provide a better control of conservatism and offer divers the possibility of selecting the level of decompression stress that they are ready to accept for a given dive.