Gas planning is an aspect of diving that many of us are confused about. Depending on your training agency and how long ago it was that you took your Open Water class, you might hazily remember an example calculation that involves a reserve, a safety stop reserve, keeping one third of the remaining cylinder pressure in reserve, and turning the dive at the implausibly precise number of 157 bars. If that sounds impractical to you, then you’re not alone. Once you book a trip, you’re going to have a hard time finding someone who actually dives that way.

Instead, conventional wisdom holds that the proper gas reserve is 50 bar, a limit common enough to have inspired the naming of numerous scuba-themed drinking establishments around the world. In such drinking establishments, you might hear the occasional tall tale of people finding themselves low on air at 35 meters and saving the day, as if surfacing with a near-empty cylinder was something to be proud of.

Given the discrepancy between what’s written in the books and what is talked about over beers, confusion is only natural. In this article, we’ll try to untangle things a little. We’ll introduce a general principle that can be applied to a variety of diving scenarios. It is based on a concept called RMV (respiratory minute volume), SAC rate (surface air consumption), or SCR (surface consumption rate). With slight variations depending on who you talk to, the three mean roughly the same. If you’re not familiar with this concept or could use a refresher, please see How To Calculate Your RMV.

Disclaimer: This article isn’t meant to be the be-all and end-all of gas planning. The examples below are provided only to illustrate concepts and don’t necessarily apply directly to dives that you do. When diving a new site, be sure to obtain the advice of people who are familiar with it, and when in doubt, always err on the side of conservatism.

Enough of a preamble, let’s have at it. 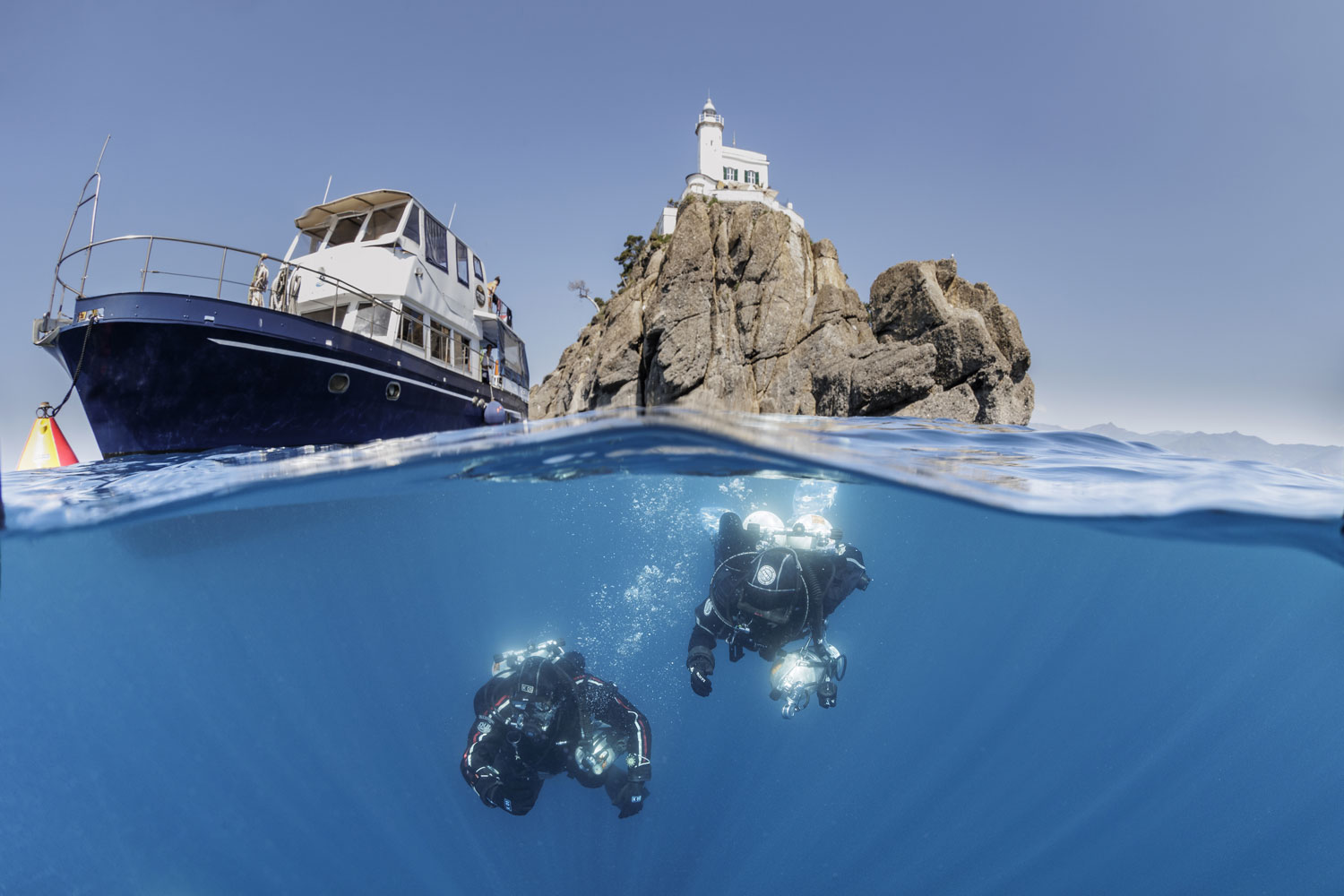 When a diver experiences a low-on-gas or out-of-gas (OOG) emergency at depth, the protocol is to turn to a teammate, share gas, and end the dive. For this to be a viable solution, the teammate needs to have enough gas for two. Since equipment failures can happen to anyone at any time, the basic principle of gas planning is:

At any point during a dive, every diver must have enough gas to cover a bailout strategy for themselves and a buddy who has an OOG emergency.

Sounds reasonable? If we’re agreed, then the next question would be, how do we determine this amount? For illustration, we’ll look at two examples. Each time, the basic method is to

This total is known as Rock Bottom, Minimum Gas, or Turn Pressure, again depending on who you talk to. They all mean the same: the tank pressure at which you need to start your ascent, at the very latest.

Let’s say we’re doing a dive to 30 meters from a boat, square profile with descent and ascent in blue water or along a line, no deco obligations. The worst-case scenario is an OOG emergency at 30 meters. A possible bailout strategy could be very simple: Establish gas sharing, ascend to 5 meters at the planned rate, do a safety stop, end the dive.

Assuming an RMV of 15 l/min, the amount of gas needed would be:

Our total is 552 L, or about 50 bar in a standard AL80 cylinder (11.3 liters). That’s an estimate of how much we’re actually going to breathe, as an absolute minimum.

So do we turn the dive at 50 bar, the magic number handed down through the ages? Not so fast. There are additional considerations, such as:

Depending on how we answer these questions, adding a safety margin of somewhere between 50 and 100 percent doesn’t seem too conservative, does it? We might therefore decide that our reserve is 80 bar. Or 100. Once any diver on the team reaches this pressure, we need to end the dive. If we stay longer, then our bailout strategy will no longer be covered. We don’t want that to happen. 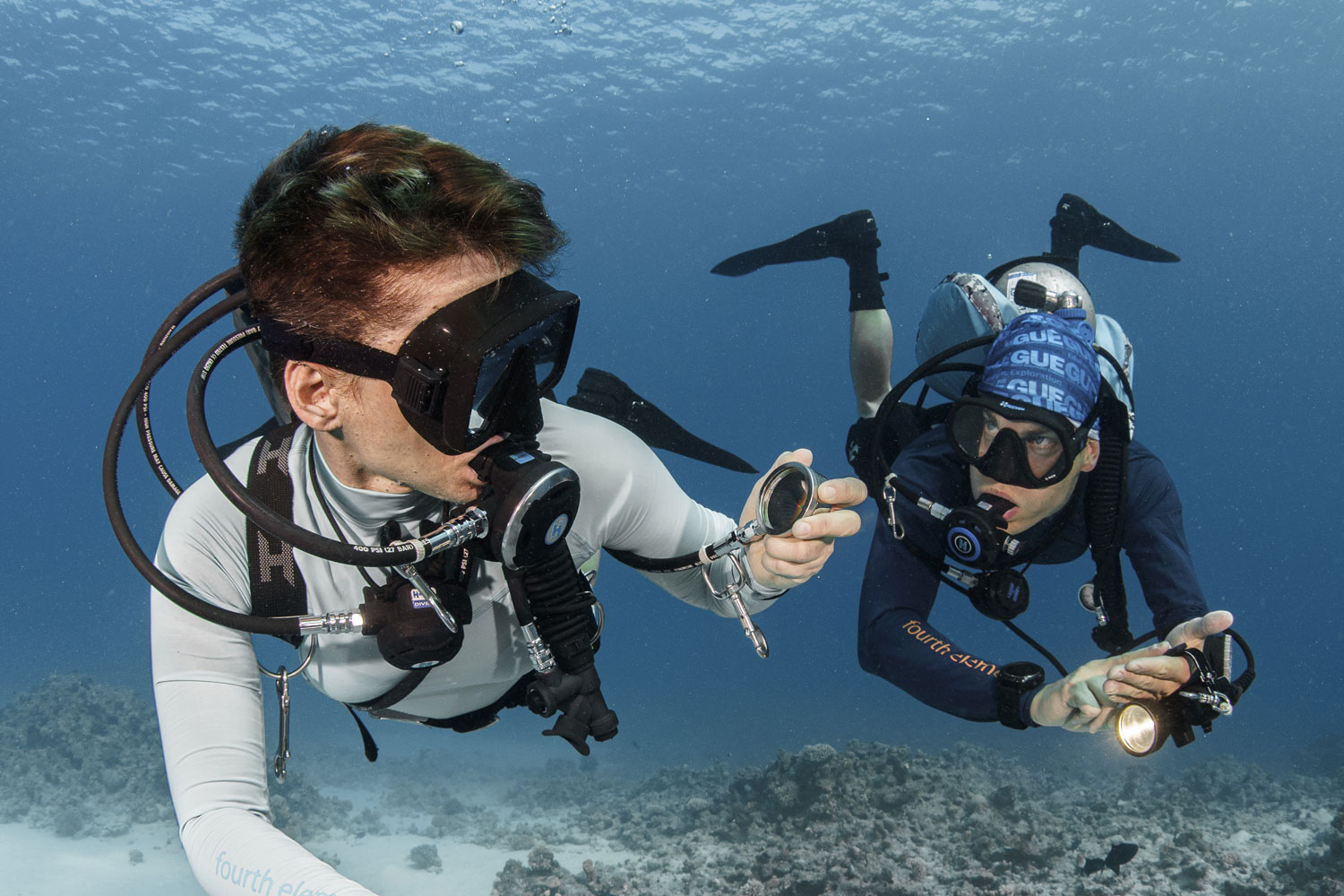 Of course, if all goes well, which should be the vast majority of cases, you’ll complete the ascent and safety stop using only 30 bar or even less. Now I hear people say: “But I paid for a full tank of Nitrox! I don’t want to end the dive with 70 bar!” – to which my reply is: Yes you do. It’s like finishing a skydive with your backup parachute still in its pack. It’s a good thing. With one added wrinkle: Unlike a backup parachute, those 70 bars aren’t yours. They’re a shared resource. If you end a 30-meter dive as described above with only 20 bars left in your tank, that’s a dive where you would’ve been no use whatsoever to a teammate with an OOG problem.

By extension, you never, ever want to complain about a buddy turning the dive when you still have a lot of gas in your tank. That buddy is conserving the portion of shared resources they’re carrying, putting responsibility above ego. Don’t make them regret their decision.

This is a shore dive. Our descent and ascent point is close to the beach, at a depth of 5 meters. Our target is a little shipwreck that’s maybe a 10-minute swim down a sloping reef, away from our point of descent. The wreck sits at a depth of 25 meters, and the average depth for the swim is 15 meters. We expect a mild longshore current, lateral to our direction of swimming. How do we plan for something like this?

Again, we need to think through the dive and look at our potential bailout strategies. The worst-case scenario is an OOG situation at the farthest point of the dive, at 25 meters of depth and a 10 minute-swim from our planned ascent point. Now let’s think about our bailout strategy: Can we afford to surface directly from the wreck? In that case, our reserve calculation would be similar to the example above. Maybe we can, if all else fails, but I’d rather not if I can help it. Currents are usually stronger up top than near the bottom; a surface swim back to our point of exit might be difficult.

A better bailout strategy would be to swim back underwater while sharing gas. Let’s do the math:

This would be just over 90 bar in an AL80, as an absolute minimum for how much we are definitely going to breathe. Our actual reserve must be larger than that. And again, there are a number of considerations.

First of all, the contingency of an emergency ascent must be covered. We need to do both calculations and apply the greater amount. Secondly, unless we regularly drill out of gas situations, we’re probably not as efficient swimming while gas sharing as we would be otherwise. This is particularly true if we’re using a recreational regulator configuration with a relatively short octopus hose – they’re okay for direct ascents but not very convenient for long swims.

You can probably tell where this is going: If we add a safety margin of 50% to our 90+ bar, our reserve becomes 140 bar. If we apply a safety margin of 100%, then our reserve becomes 180 bar, and the conclusion is that we can’t rely on this bailout strategy when diving on a single tank. In an OOG situation at the farthest point of the dive, we might be stuck with having to ascend directly from where we are and drift at the mercy of the current.

For the sake of the example, let’s say we decide to turn the dive at 140 bar. If all goes as it should, swimming back takes only 40 bar per diver, and we’re back in the shallows with 100 bar left in our tank. Do we need to end the dive, ”wasting” all that good Nitrox? Fortunately not. Unlike the first example, where we ascend in blue water with nothing to see, this time we’re still on the reef. Once back in shallow water and close to shore, our reserve requirements change. We can spend some more time, relax and take pictures, and surface when we hit our 50. 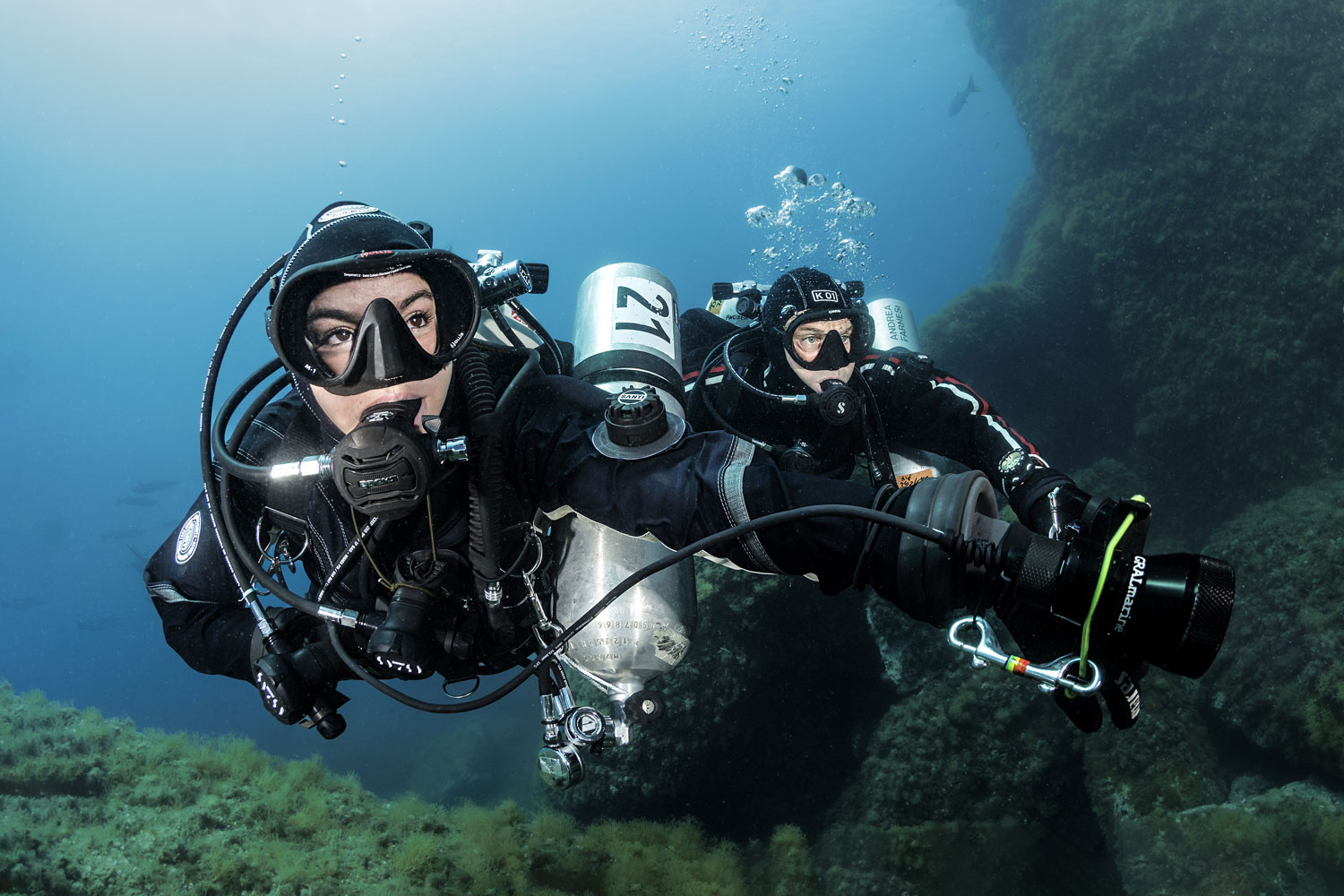 Looking at these gas planning methods, it should become clear how important it is to plan and brief every dive as a team. You want everybody to follow the narrative, think through the dive from the beginning to the end, and understand the worst-case scenario and the bailout strategy.

Be aware that your plan is only as good as your diving.  If you’ve never practiced a gas-sharing ascent from anywhere deeper than 10 meters, you might want to factor that in when deciding your safety margin for 30-meter dives.

Debriefings are another thing. After every dive, it's important to verify that you’ve finished on the planned amount of gas. If not, there should be an explanation why. If nothing untoward happened during the dive but you finish with too little gas, you need a more conservative dive plan. If you end up finishing with more than you planned for on a regular basis, then maybe you can add a little extra bottom time next time. Without a debriefing, you won’t know if either is the case.

Finally, especially when looking at the second example, you might realize that a single tank isn’t a lot of gas when you’re at the far end of a dive and fecal matter intersects with the ventilation equipment. For anything deeper than 25 meters or involving long swims away from shore, you might want to look at learning how to use double tanks or carry an AL40 as a redundant gas supply. You don’t need to breathe all of it. You don’t even want to. Like that backup parachute, you just want to know it’s there.

Tim Blömeke teaches technical and recreational diving in Taiwan and the Philippines. He is also a freelance writer and translator, as well as a member of the editorial team of Alert Diver. For questions, comments, and inquiries, you can contact him via his blog page or on Instagram.