What do we see underwater?

Some people dive in search of abandoned treasures, or wrecks of ships or planes, others simply because they like to feel the sensation of being weightless. Yet, the majority of divers go underwater to see, to observe the strangest plants and animals. Get ready to discover a fantasy world, inhabited by weird beings that we wouldn't encounter in the worst Star Wars bars. But let's take things one step at a time.

Do you know what a sponge is? Forget the ones you use to wash yourselves, the sea is full of sponges and almost none of them look anything like the ones we keep in the bathroom. They are animals, even if they live stuck to a rock and they never move. They grow in different shapes, some like a barrel, a goblet, a hazelnut, a heap of dirt; the most common ones encrust the surface they live on, in other words they form a thin layer that covers the rock. They are brown, or black, red, or yellow. If seen from the outside, they have holes on their entire surface; if we could open them we would see that the smallest holes are necessary to suck in water, that inside there are cells that catch food particles, and that the unused water goes out through larger holes. A sponge works like a pump, it moves water through, and extracts food from it.

Then there are cnidarians, namely jellyfish, sea anemones, corals, and sea fans. 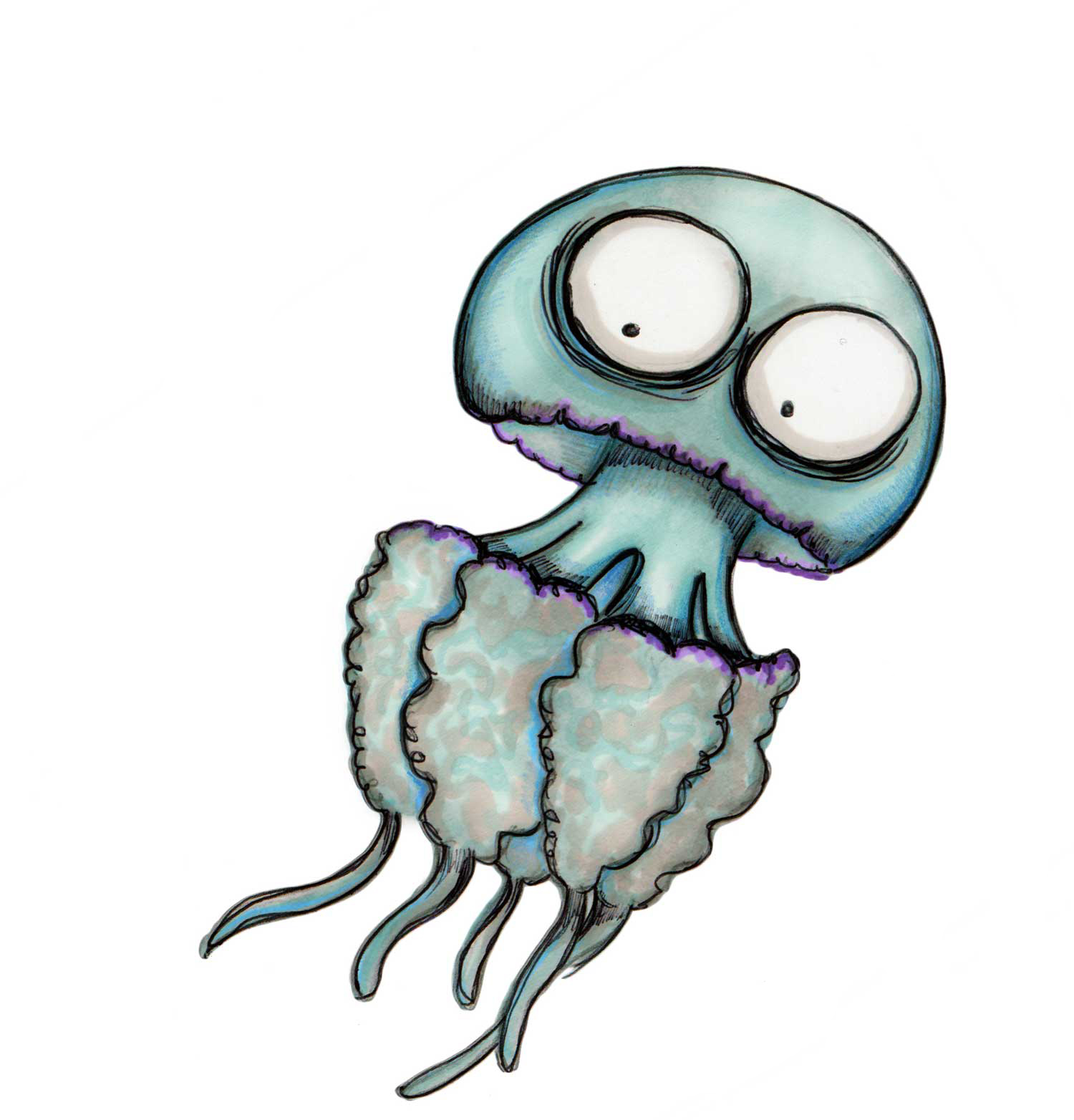 Jellyfish roam the sea, corals attach themselves to the bottom, where they will live for their entire life, but to colonize an area they split themselves; 1 animal generates 2, then 4, then 8, 16, 32, and this is how coral polyps, all identical, form colonies. Each one builds its part of the skeleton, and they create crazy architectures, shaped like a tree, or a shrub, or a mountain. 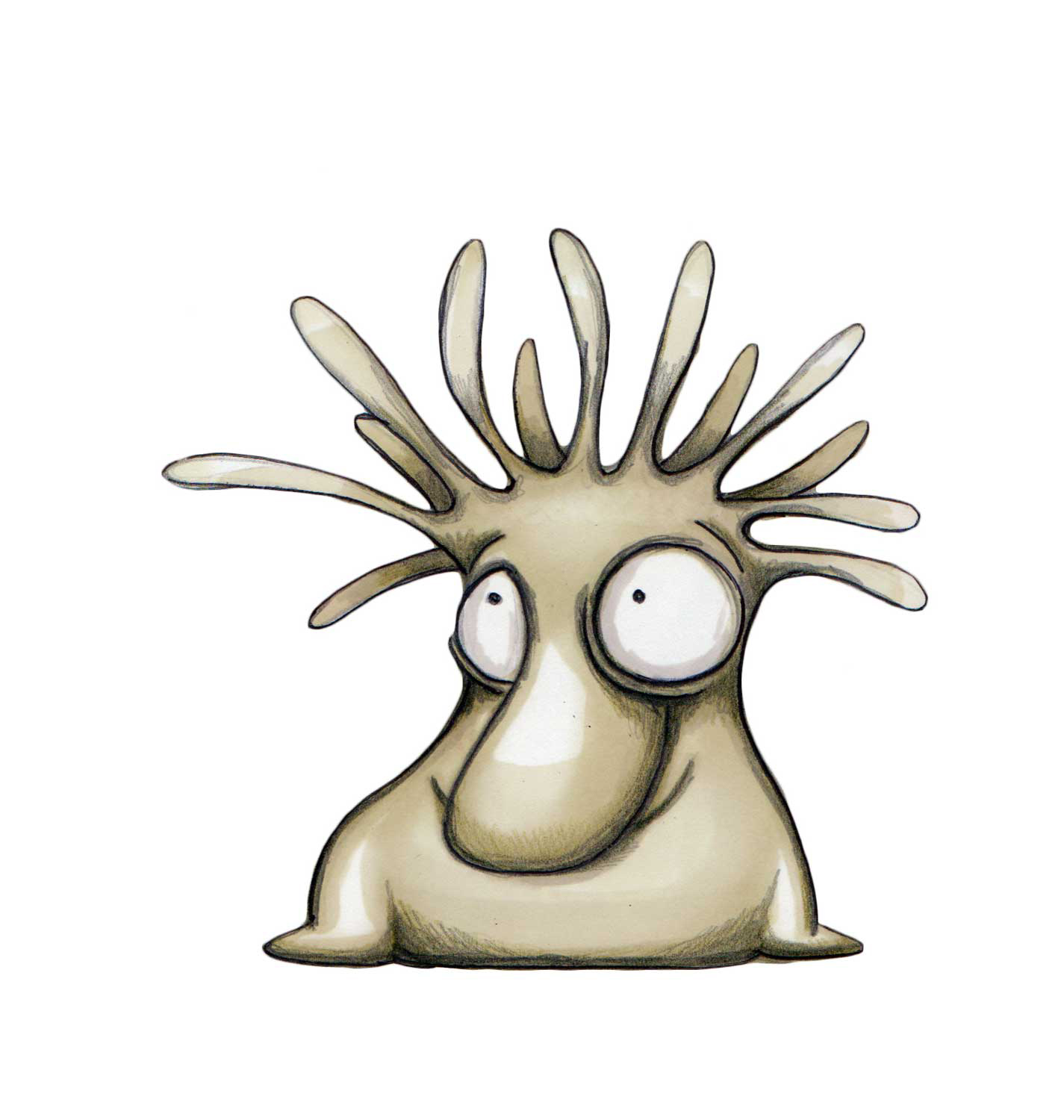 Cnidarians also extract food from water, small particles or even larger animals, that they capture with their tentacles and paralyze thanks to stinging cells, but we'll talk about this later.

On the sea bottom, there are other very strange animals, such as ascidians, shaped like a bag with two holes, whose purpose is... you tell me: one to suck in water and the other to push it out, you all get it by now.

Underwater, where the light of the sun penetrates, algae and plants sometimes form real underwater grasslands. Posidonia is a plant, with roots, leaves, blossoms, and fruits . And it is also very useful in protecting beaches from strong waves. Underwater, even worms can at times be beautiful. If I say worm, you'll think "Yuck" picturing those poor earthworms, but underwater there are very colorful worms, some with orange and white tufts... in other words, just beautiful. 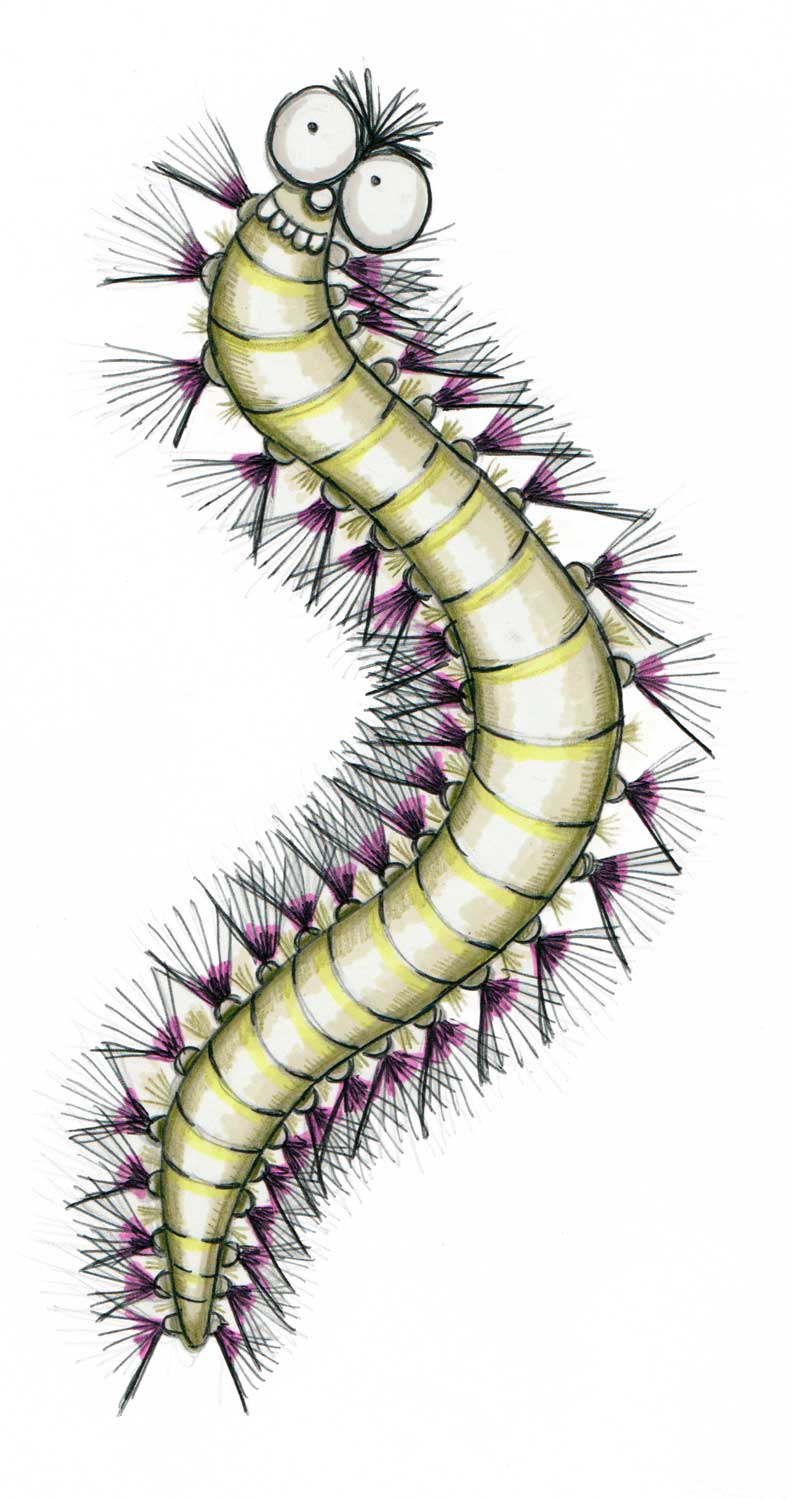 Crustaceans are inside out animals. Let me explain: while we are made with a skeleton inside, and with flesh covering it on the outside, a crustacean has an outside skeleton, that protects it like an armor, and the flesh is inside. So, the most attentive readers will ask, how can it grow? Once in a while it molts, namely it swaps the old shell with a new, larger one.

Since they are made inside out, crustaceans are introverted, shy, and it is in fact difficult to see them outside their little burrows. Crustaceans are, for example, crabs, prawns and shrimps, lobsters. They all have 10 jointed legs; the first pair of legs are called claws: they are necessary for grabbing and breaking.

Molluscs are snails, or sea shells, to use a common term: many of them build a shell that is actually their little house, that they carry on their back. When the mollusc dies, the shell remains empty, and sometimes the sea will cast it onto a beach. Or else, if it stays in the water, it can be used by a really shy crustacean, the hermit crab, that uses it to protect its soft tail.

Other molluscs do not have a shell, they are naked and very colorful snails, and divers call them nudibranchs. But without a shell won't fish eat them? No, because nudibranchs are really gross to eat, and fish know that because they are colorful, and in the sea everything that is very colorful usually cannot be eaten. 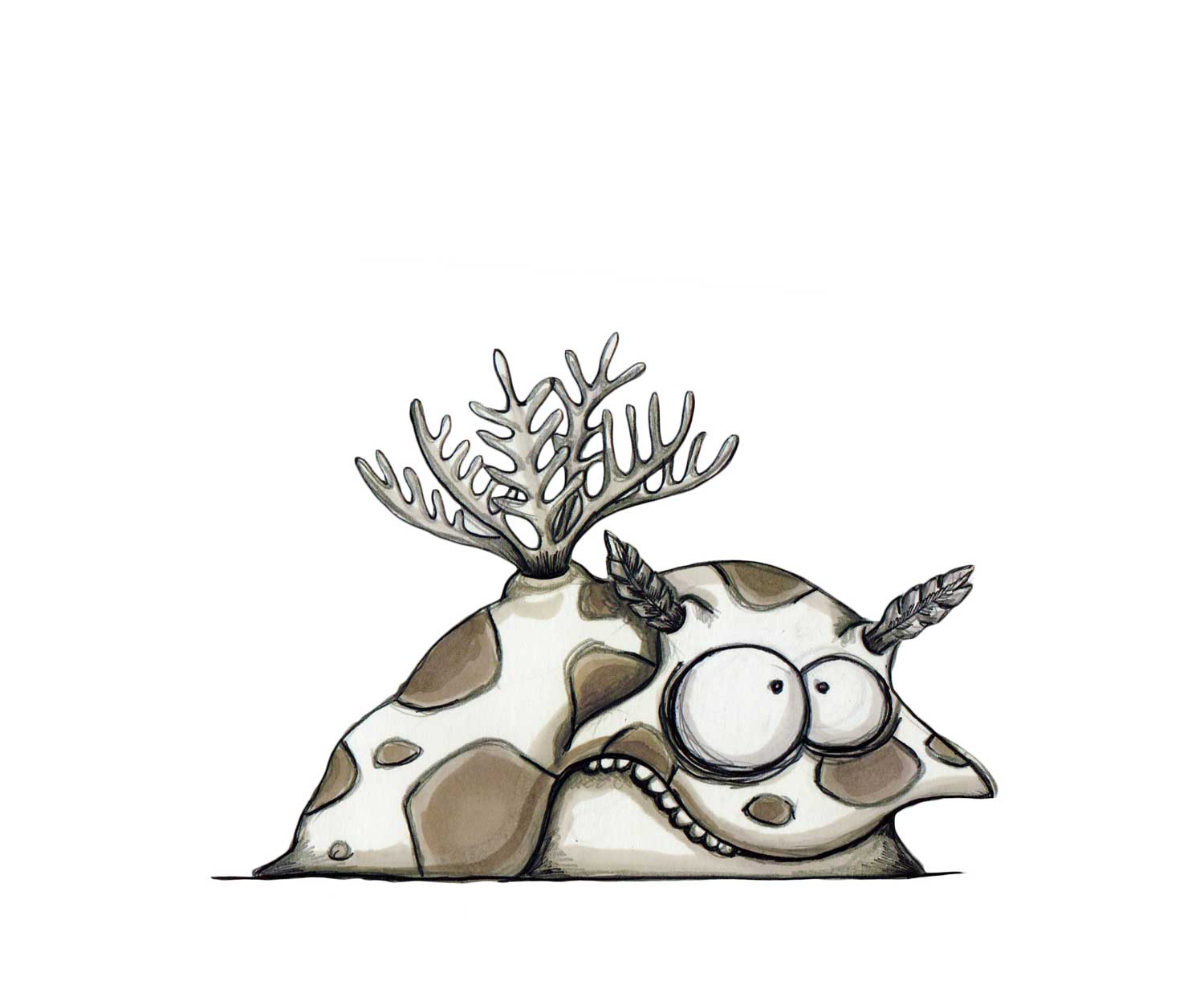 But the strangest molluscs are called cephalopods. They have legs (which they call tentacles) around the mouth, they change color all the time, they are monstrous but fabulous to watch. Cephalopods are octopuses, cuttlefish, squids.

The weirdest animals of all are echinoderms. The starfish is an echinoderm; it is a headless animal, with the mouth on its belly and tube feet all around, without teeth; to eat it vomits its own stomach and digests its prey on site, after which it will suck it. Weird, right? An other echinoderm is the sea urchin, spherical in shape; its mouth too is underneath, but differently from the starfish, it has 5 large teeth with which it grazes algae. 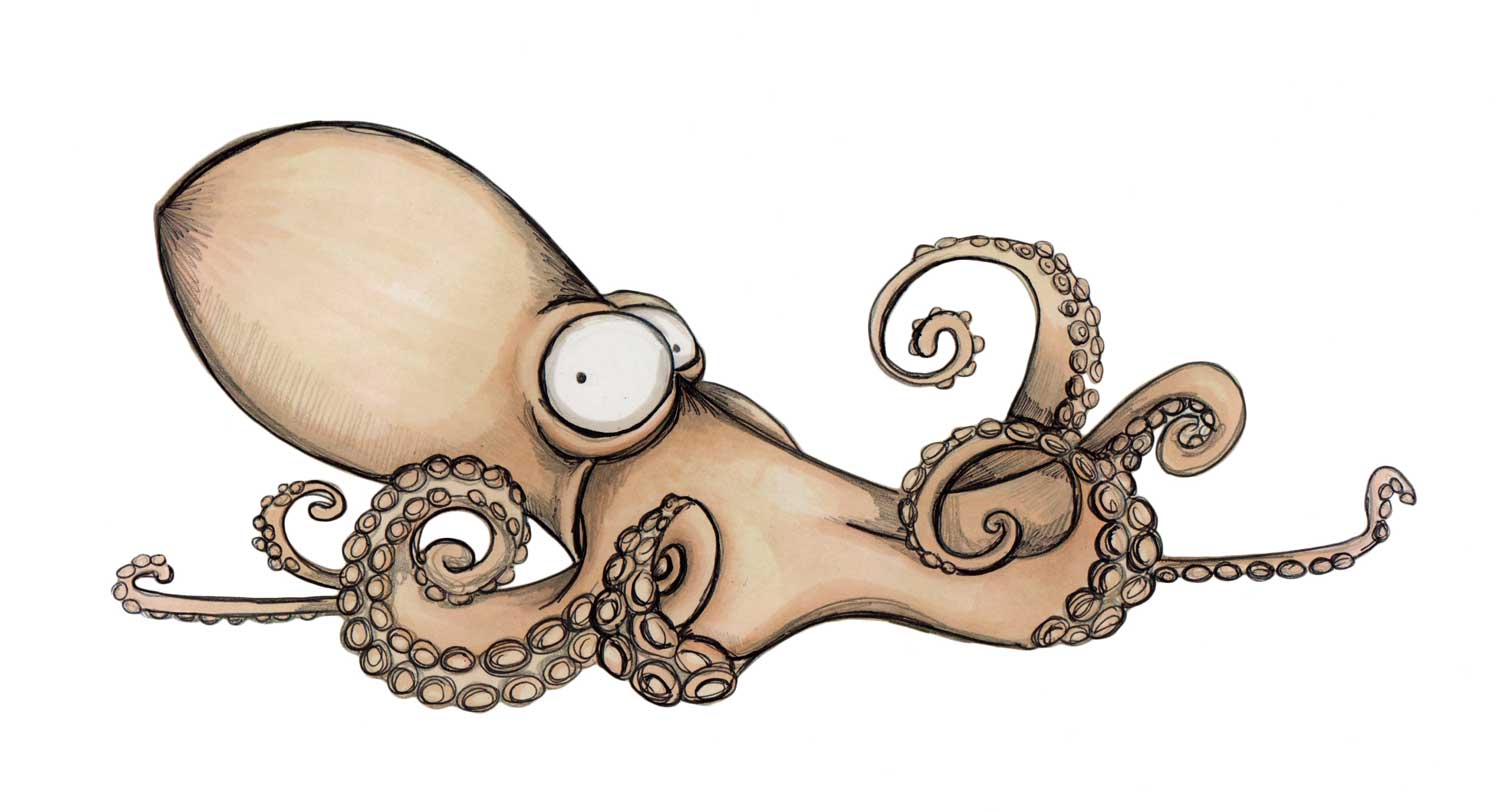 And finally there are fish, many of them swim, others lay on the sea bottom. Depending on where you go diving, you'll see different fish. I will mention a few typical of our waters. The damselfish is blackish-brown, its tail is forked like the one of swallows, and it eats plankton; its young are of a nice, brilliant blue. Sea breams are round and silvery, some have black stripes. Groupers have a large mouth, and look at you swaying their fins. Goatfish have two barbels that look like whiskers in constant motion. Blennies and gobies lay on the bottom, and observe you with funny-looking faces. On the bottom we find also scorpionfishes, full of spikes, and usually considered ugly. Soles and turbots have both eyes on the same side (on the right for soles, on the left for turbots), and live laying on the opposite side. And so on.

Are you curious to meet all these wonderful creatures underwater? Good, in the next article we will see how to interact with them, following some basic rules.

Massimo Boyer is a marine biologist, underwater photographer and writer, dive travels promoter as well as diving instructor and guide. A great expert of Indonesian seas, he is DAN Member since 2008.

This text is part of the publication How deep is the sea (Com'è profondo il mare), included in the Collana del FARO series, published by Istituto per l'Ambiente e l'Educazione Scholè Futuro Onlus, in collaboration with il Pianeta Azzurro and DAN Europe, for Scuola d'aMare project. This series includes straight-forward texts, of easy reference and use on important environmental and social subject matters.