For an introduction to this five part series see: House of Cards

'As a child I was fascinated by the way marine creatures just held their position in the water and the one creature that captivated my curiosity and inspired my direction more than any is the Nautilus.

Hanging motionless in any depth of water and the inspiration for the design of the submarine with multiple air chambers within its shell to hold perfect buoyancy it is truly a grand master of the art of buoyancy.

Buoyancy really is the ultimate Foundation skill in the repertoire of a diver, whether they are a beginner or an explorer. It is the base on which all other skills are laid. With good buoyancy a problem does not become an emergency it remains a problem to be solved calmly under control.

The secret to mastery of buoyancy is control of breathing, which also gives many additional advantages to the skill set of a safe diver. Calming one's breathing can dissipate stress, give a sense of well being and control. Once the breathing is calmed, the heart rate will calm too and any situation can be thought through, processed and solved.

Breath control is used in martial arts as a control of the flow of energy, in prenatal training and in child birth. At a simpler more every day level, just pausing to take several slow deep breaths can resolve physical or psychological stress in many scenarios found in daily life.

How you may ask does that relate to buoyancy control? Well, of course, breath moves a significant quantity of gas volume to or from the diver and if the breathing pattern is incorrect it can impact buoyancy greatly; if the pattern is correct then it can fine tune the control to the perfection of my friend the Nautilus.—Phil Short, Dive Industry Consultant and Dive Safety Officer and Training Director IANTD UK.

For those of you who watched Jacques Cousteau’s adventures featured in the "Silent World" documentary dating back to 1956, first generations of underwater explorers ventured deep equipped with three moderate-sized cylinders harnessed to the back, CG45 air regulators the size of an alarm clock, a shatterproof glass mask over the eyes and nose, a weight belt and rubber foot fins. Overall, it was a twenty-five kilograms apparatus that relied on the most powerful yet sensitive ballasting system: the human lungs. Also, at the end of the last century, some may recall that their first diving lessons were performed using lung control only before integrating a buoyancy control device at a later stage.

Nowadays, the importance of breathing properly while diving if often introduced primarily as a safeguard for new divers to avoid a lung over-expansion injury during an uncontrolled ascent, the golden rule being "never hold your breath!" Beyond the concerns over uncontrolled buoyancy, holding one's breath, or skipping breathes can also lead to a build of CO2 and other hypercapnia issues. On the flip side, breathing continuously might also lead to hyperventilation issues. Therefore proper ventilation is important from a physiological perspective to ensure efficient gas exchange in all tissues by using the tidal volume of the lungs during the immersion. The larger and/or more uncontrolled the tidal volume during the breathing cycle, the less space and chances are given for inspiratory and expiratory reserve volumes to provide for precise buoyancy adjustment. 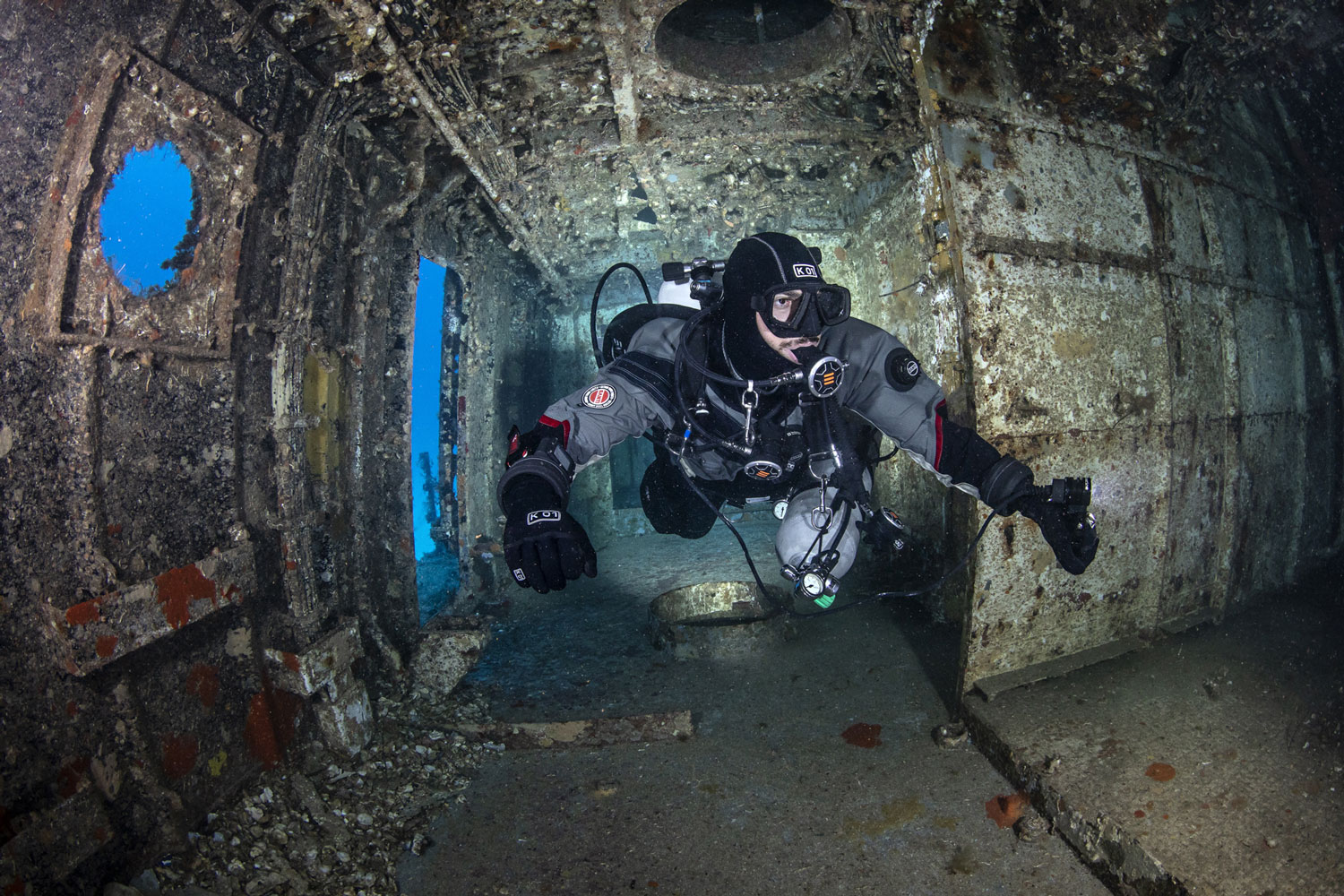 The awareness of the impact of such adjustments cannot be fully experienced while propelling ones' self throughs the water but rather in static mode. Propulsion can compensate for lack of buoyancy control. Its effect is similar to throwing a paper plane in the air; it will forcefully glide until it loses speed and crash. In contrast, a controlled descent or ascent can be initiated solely using the inspiratory and expiratory lung reserve rather than wasting gas fiddling constantly with a wing or drysuit inflator valve.

Building awareness of breathing cycles by taking normal breathes in a slow rhythm adding minor adjustments when required, is the key to fine tuning buoyancy control. However, the total lung capacity has its own limitations and is impacted by external factors such buoyancy and ballast weight distribution.

Buoyancy distribution varies based on one's gas volume management strategy for adding or removing gas from various parts of equipment throughout the dive, specifically the BCD or wing, counter-lungs and/or drysuits. One size does not fit all; in addition to the amount of gas involved, the proper sizing of each piece of equipment relative to the individual's morphology, determines their capacity to efficiently distribute the gas volume to where and when it needs to be.

It's the same as for the lungs. Minimising the required gas volume in the equipment by correct weighting facilitates buoyancy management insuring that the right amount of gas flows in and out. It is common among beginners to believe that being overweighted will prevent one from shooting to the surface. However, the amount of gas required to compensate for the excess amount of weights can become unmanageable and most likely disturb the diver's normal breathing pattern and the time required to vent gas causing them to surface too fast.

Some of the ballast weight we carry as divers is an integral part of our configuration such as the backplate, regulator, and valves and cannot be modified during he dive. However there are other variables we can act on. How many of us filled our early diving logs conscientiously ticking equipment boxes and writing down how many kilos of weight we were carrying, meanwhile ignoring other major components. The list is long, but each component matters. Planning to dive high or low pressure steel cylinders? What are the cylinders weight? What is the weight change between a full and empty aluminum cylinder? Are you diving fresh water, salt water or in the Red Sea? Weight-wise, what is the impact of removing some undergarment layers after switching to a heated system? The list of possible combinations is endless, so one needs to know how to make a proper assessment when visiting a new environment or after making changes in one's overall configuration. Any change requires a weight check, which is not time consuming, when entering and preparing to exit the water. Once again, buoyancy relies mainly on lung capacity and starts with draining the gas from all parts of equipment. 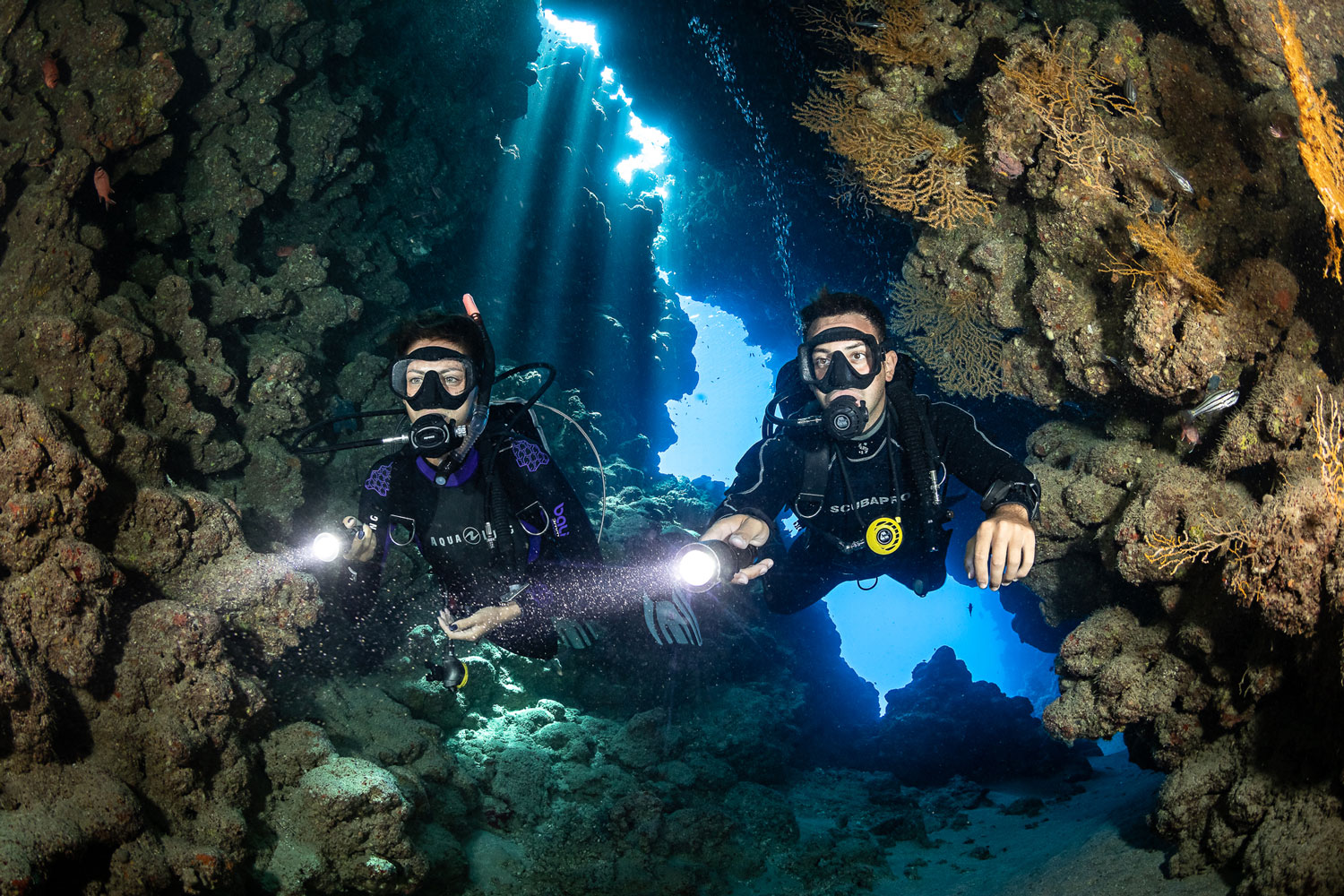 After filling your lungs to approximately 80% of their volume, you should float above the surface, and float at the surface with your lungs 50% full, and start sinking after exhaling down to 20% capacity. However repeating this check before exiting the water with almost empty cylinders (even more with aluminium or low pressure steel cylinders) is also wise to ensure one can maintain your buoyancy comfortably at a safety or decompression stop, when your tanks have minimal gas. Building experience to master static neutral buoyancy and controlled ascent/descent does not require much depth. Practicing in the shallows is potentially safer and more challenging as this where major changes of pressure occur.

The first benefit or value of mastering buoyancy control is safety:

As a virtuous cycle, buoyancy mastery triggers control. Control leads to comfort, comfort to calm, calm to control, focus and gas saving in order to maximise the time spent underwater and simply make the best out of the moment.

As undersea pioneer Jacques Cousteau once explained, “At night I had often had visions of flying by extending my arms as wings. Now I flew without wings. Delivered from gravity and buoyancy I flew around in space.” Zero gravity is natural to the Nautilus and it is part of the natural law in space. Underwater, weightlessness is a skill to be learned before it can become second nature. It's an achievement. For your House of Cards structure to stand strong, one needs to start by building a strong foundation. Once a diver masters the ability to hold their position in the water column, they can evolve comfortably and safely in a multidimensional space, and position themselves where they want and need to be as part of a team and as part of an environment.