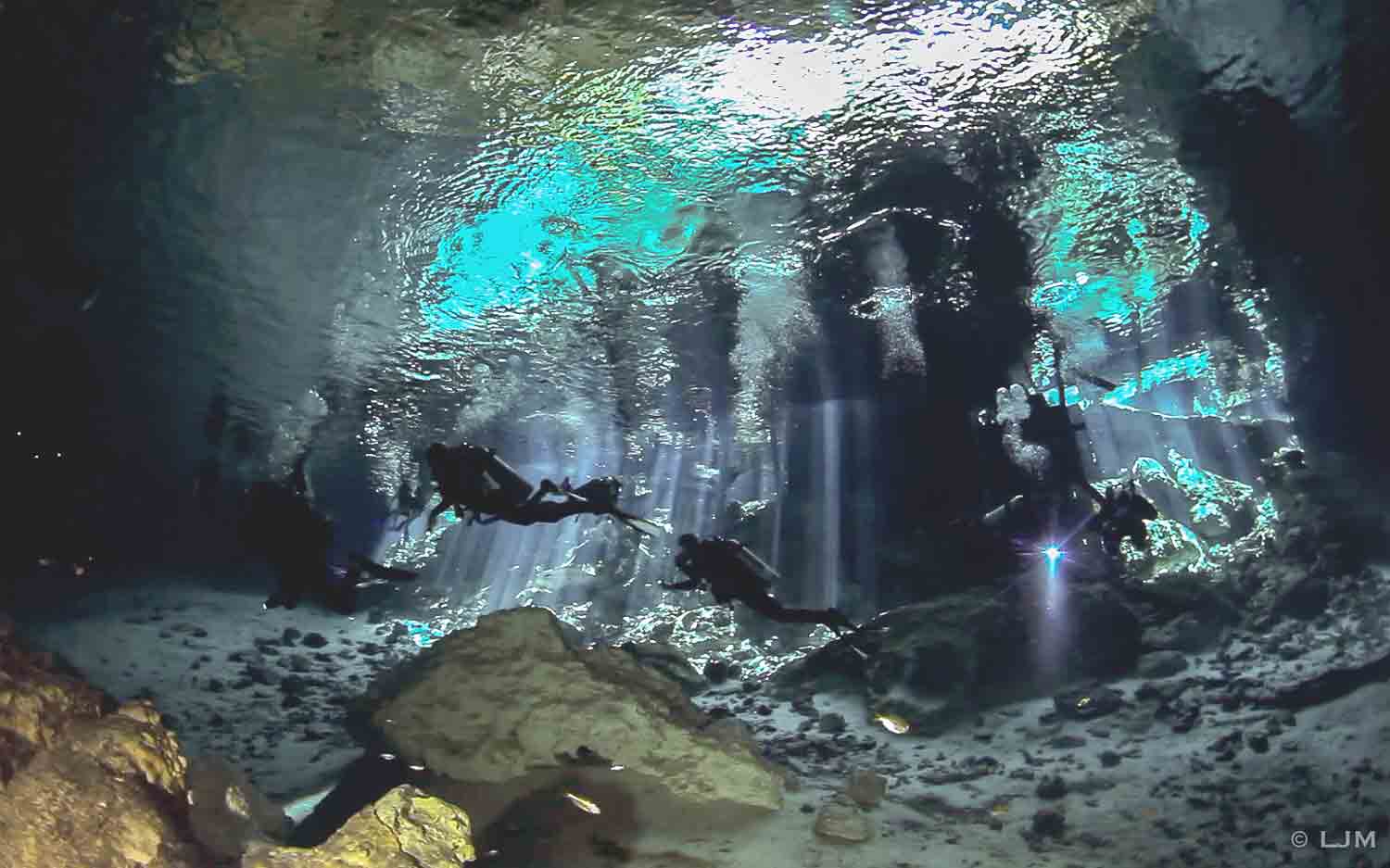 The history of the Mayan Riviera cenotes, and therefore also of Cenote Dos Ojos, begins approximately 145 million years ago, with the formation of the huge limestone platform that is the Yucatan peninsula, in the South of Mexico. What we see today is the result of alternating glacial and interglacial periods. When water on the planet was concentrated at the poles forming vast glaciers, the sea level, and therefore the water table, went down, and underground karst channels became empty caves. In those eras, water was meteoric, and by dripping and mixing with CO2, formed immense underground cathedrals of calcium carbonate. These caves then widened again with the rising level of the water table. In some areas the vaults of the caves collapsed, uncovering the underlying aquifer. This is how cenotes, sacred places for the Maya people, originated. Dos Ojos (two eyes in Spanish) owes its name to the two openings in the rock over the springs that resemble two eyes.

Dos Ojos is a cave system, in other words a network of caves, flooded underground tunnels, and cenotes, which are all connected, and offer endless diving possibilities. 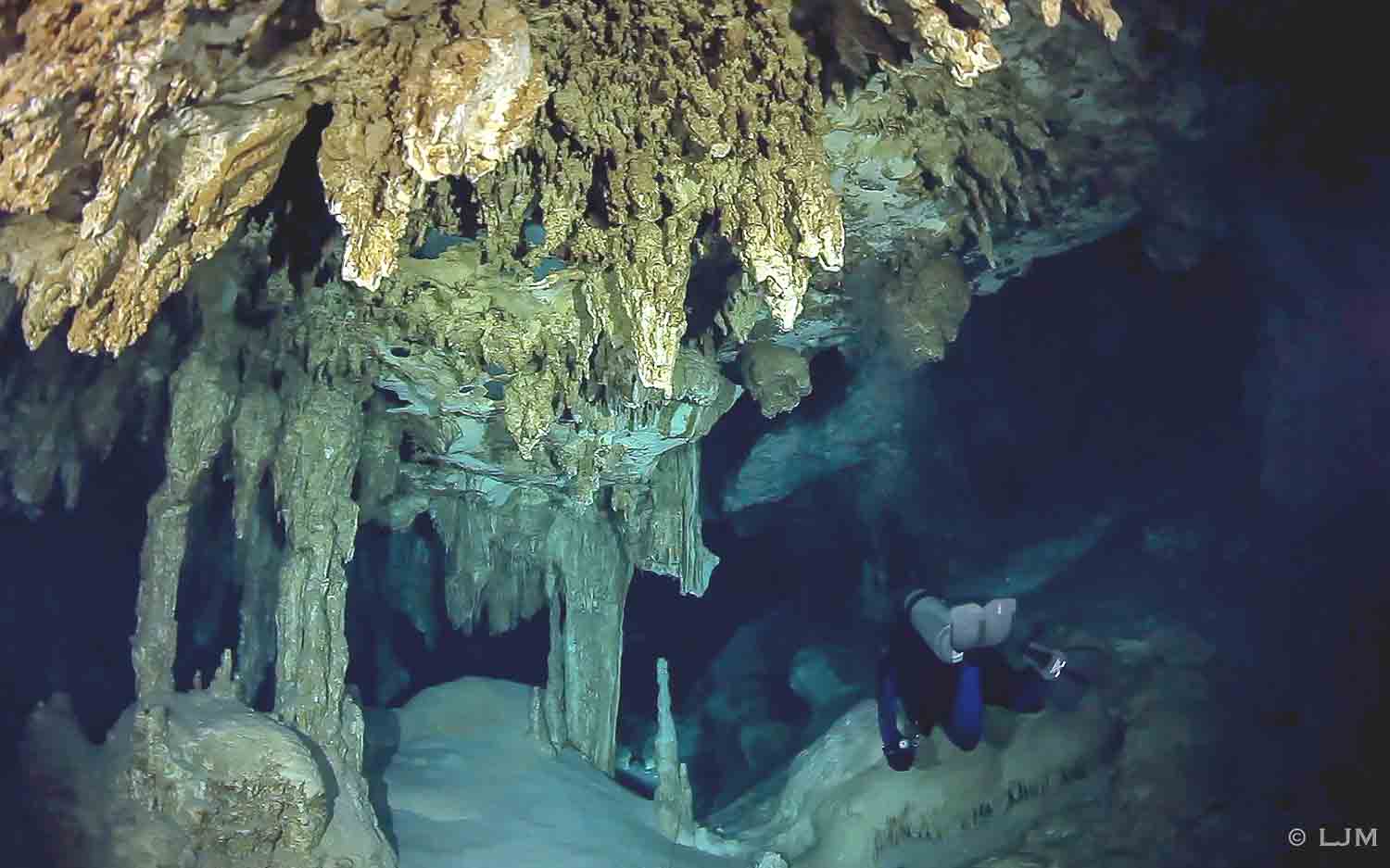 The site is buried in the woods. In the past, the only way to reach it was by trekking for a long time over sharp rocks, with your tank on your back and diving boots protecting your feet. Nowadays, there is a large parking space, and the platform to get in and out of the water has been made broader and more comfortable. There are multiple diving possibilities in Dos Ojos. For the cavern route, that does not require an actual technical diving certification, there are two lines to follow: the ‘Barbie line’, and the ‘Bat Cave line’, that lead respectively to what is called Barbie, and to the Bat Cave. An experienced and well-equipped cave diver can, on the other hand, indulge in 82 kilometers of tunnels, caves, and other cenotes. 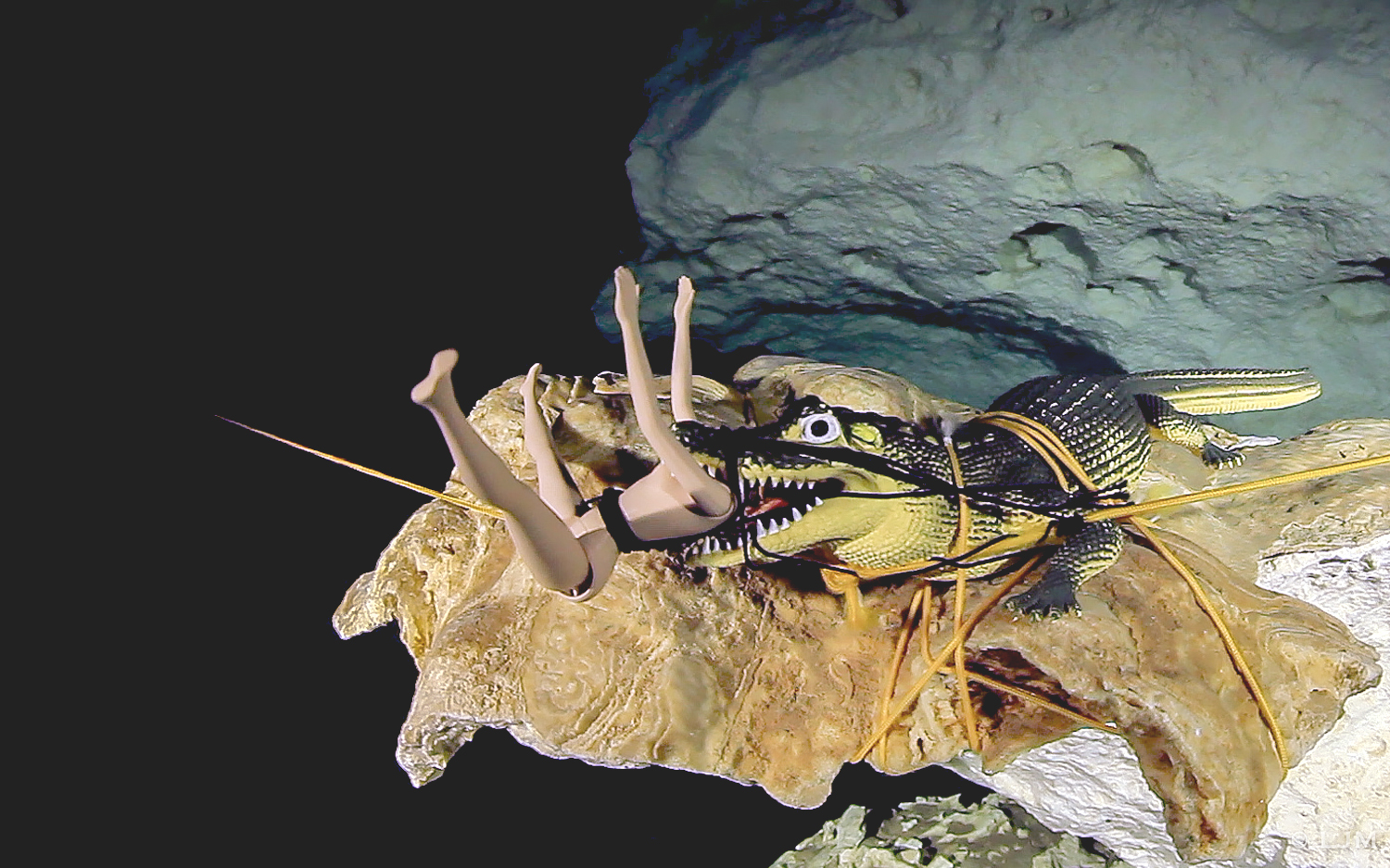 What makes this dive unique

Dos Ojos is without a doubt the most famous cenote in the world. Breathtaking setting, ease of entry, and versatility have surely contributed to its cult status, but the most deserved Oscar (and it would deserve a handful) goes to the Director of Photography. In the adamantine water, often so clear that you can believe you're flying among columns and stalagmites, the light plays hide-and-seek in tunnels and limestone formations of glacial purity, or it rains down in thick beams from the openings in the vaults to plunge in the glassy element, in a fantasy illustration scenario. Proceeding with torches in the dark, gigantic columns seem to appear out of the depths of space. The effect is phsychedelic, like a window on another world. A 'physical other world', and therefore that can be easily documented with a limitless production of astonishing images, but also a 'psychic other world' where metaphors and suggestions swim at ease among cultural and symbolic references going from the myth of the Minotaur to The Doors.

The surrounding environment is extremely delicate. A cenote is a sort of museum where the artist has spent millions of years creating its pieces; an additional reason to constantly check buoyancy and equipment. The risk of hitting a precious limestone formation on a vault with your tank is high. This is why numerous experts advice to use a sidemount configuration even for cavern, or recreational dives.

Perfect buoyancy, no matter what your configuration, is a non-negotiable condition for this dive. Divers are constantly at risk of damaging ancient concretions, as well as lifting sediments that reduce the visibility to zero. The trim needs to be adjusted to keep the fins higher than the head. The correct fin stroke to use is breaststroke. The line is the only lifesaver that will guide divers towards the exit. Never lose sight of it, never lose contact with it. Sadly, getting lost in a closed environment is easier than it seems. 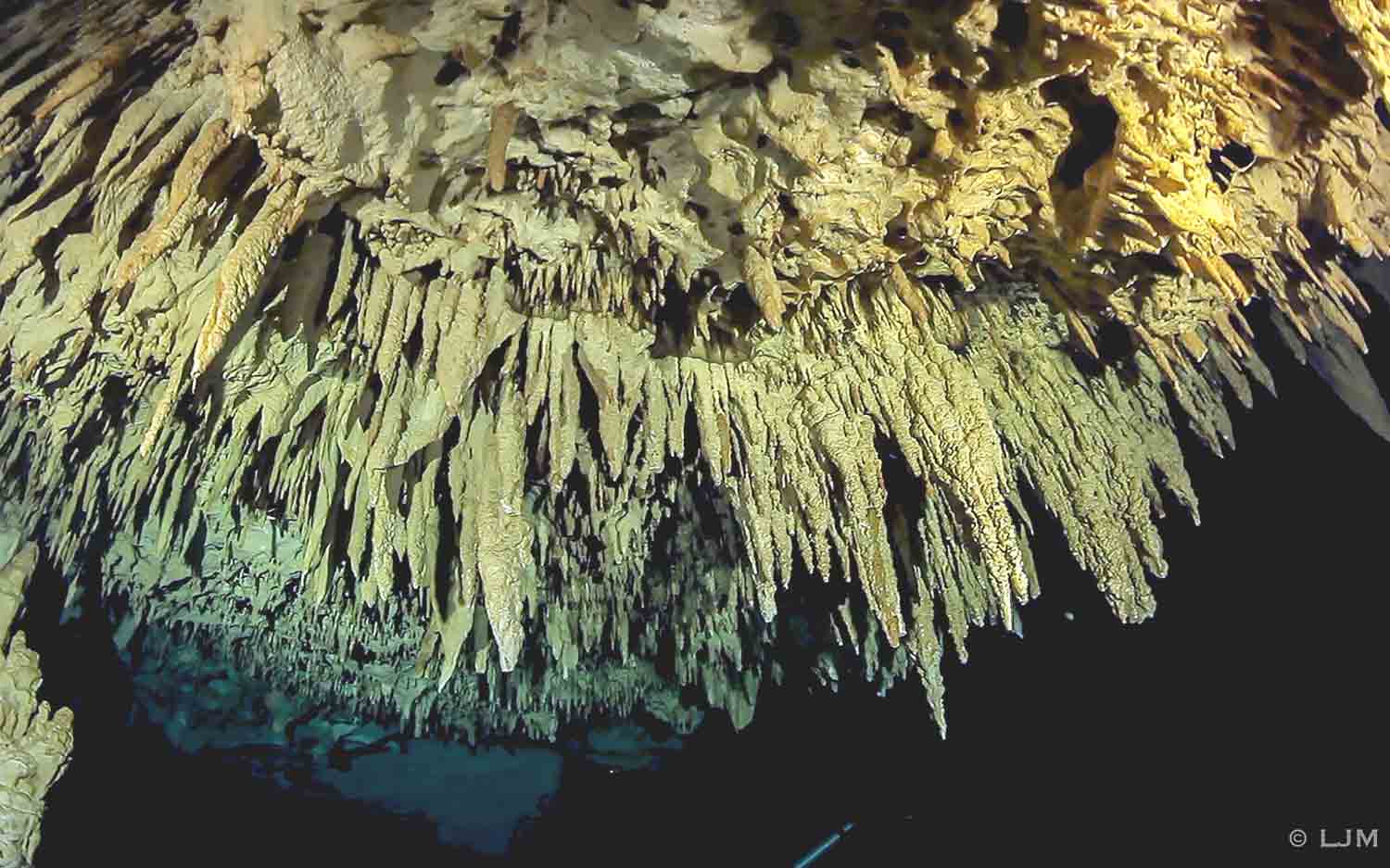 Cave dives. To go beyond the limits of Cavern dives, it is required to have a cave diver certification, which is considered 'technical'. Equipment changes drastically, starting from the length of your hoses and the configuration. For some dives trimix training and decompression procedures can be required. 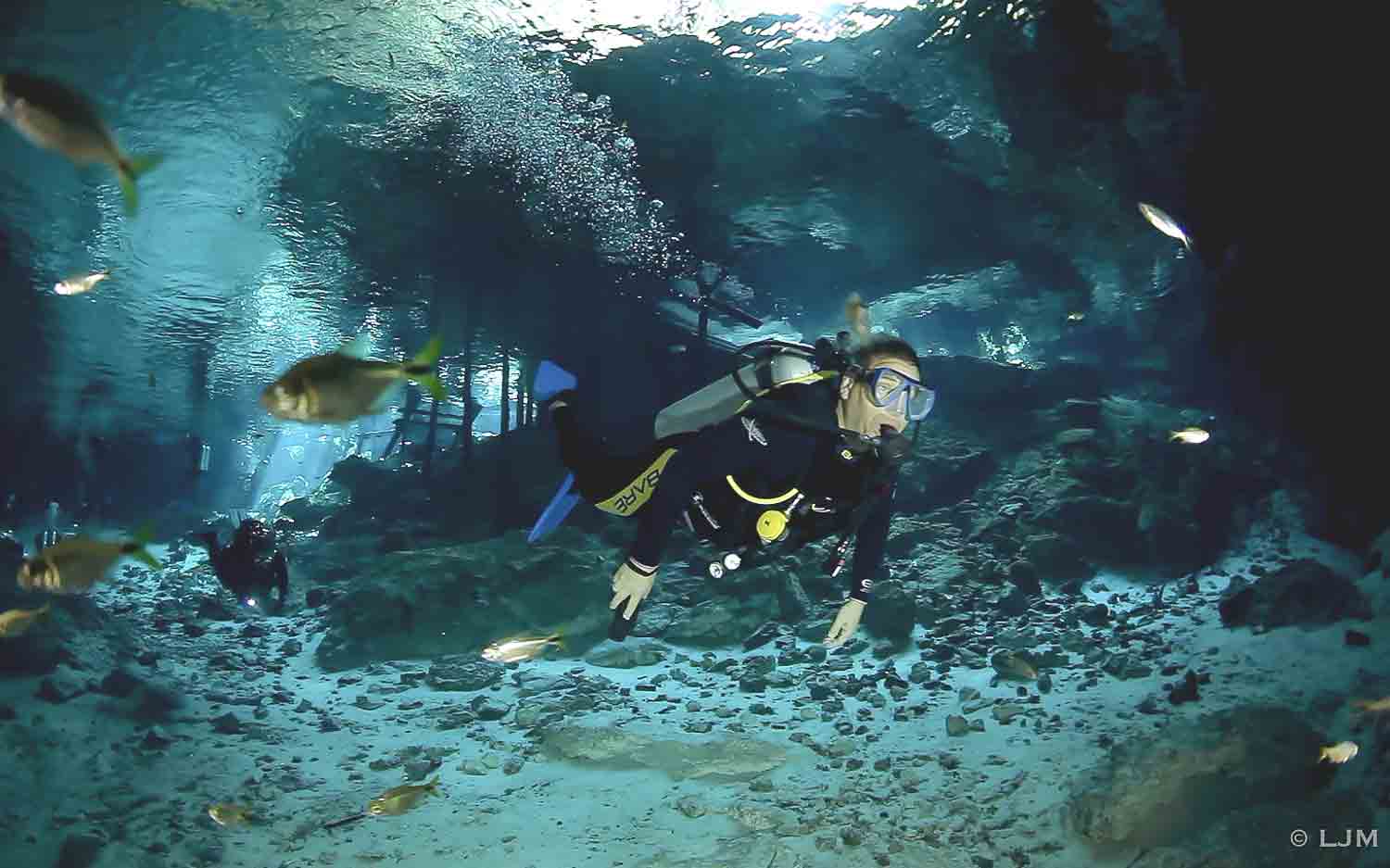