"Whatever your diving ambitions are, mastering trim, buoyancy control and propulsion techniques are very important for a safe and enjoyable dive.

As a diver you can choose from a variety of propulsion or swimming techniques depending on the situation. For example, there is the frog kick, modified frog kick, modified flutter kick, shuffle kick, helicopter turn and even a technique to move backwards. Not all kicks are useful in every situation. Depending on the type of dive and your specific purpose, you choose the technique that fits best. The most commonly used technique is the frog kick; it's a kick that can bring you everywhere. You bend your knees and ankles slightly and bring your feet and ankles together, almost like you would do when swimming a breaststroke. However, you hardly use your thighs, you use your calves, ankles and feet. It is easy and energy efficient.

If you need to turn around, you can use the helicopter turn. Basically, it is the frog kick but using only one leg. This way you can turn 360 degrees while maintaining your original position. Another technique I often use, called “sculling," allows you to descend and ascend without using your buoyancy compensator device (BCD) or upper body. The technique is to stretch the legs and move the fins horizontally in a scooping manner from side to side. As a result of the hydrodynamics and the design of the fins you will start to descend. However, when you bring the legs tight together and bend the knees and feet perpendicularly and start moving them from left to right you produce a water pressure underneath the fins, that enables you to be able to ascend.

Using a propulsion technique efficiently, your body position and trim need to be well balanced to maximize your mobility and "well-being" underwater. These then are the foundations: a tidy, manageable configuration of your equipment, a balanced rig, a horizontal and stationary position in the water column, mastering propulsion techniques and maintaining neutral buoyancy. Implementing these in your own diving is part of the process of becoming a good diver. To master these techniques you need to practice them frequently, and once you do, you will come close to knowing how a fish feels underwater." 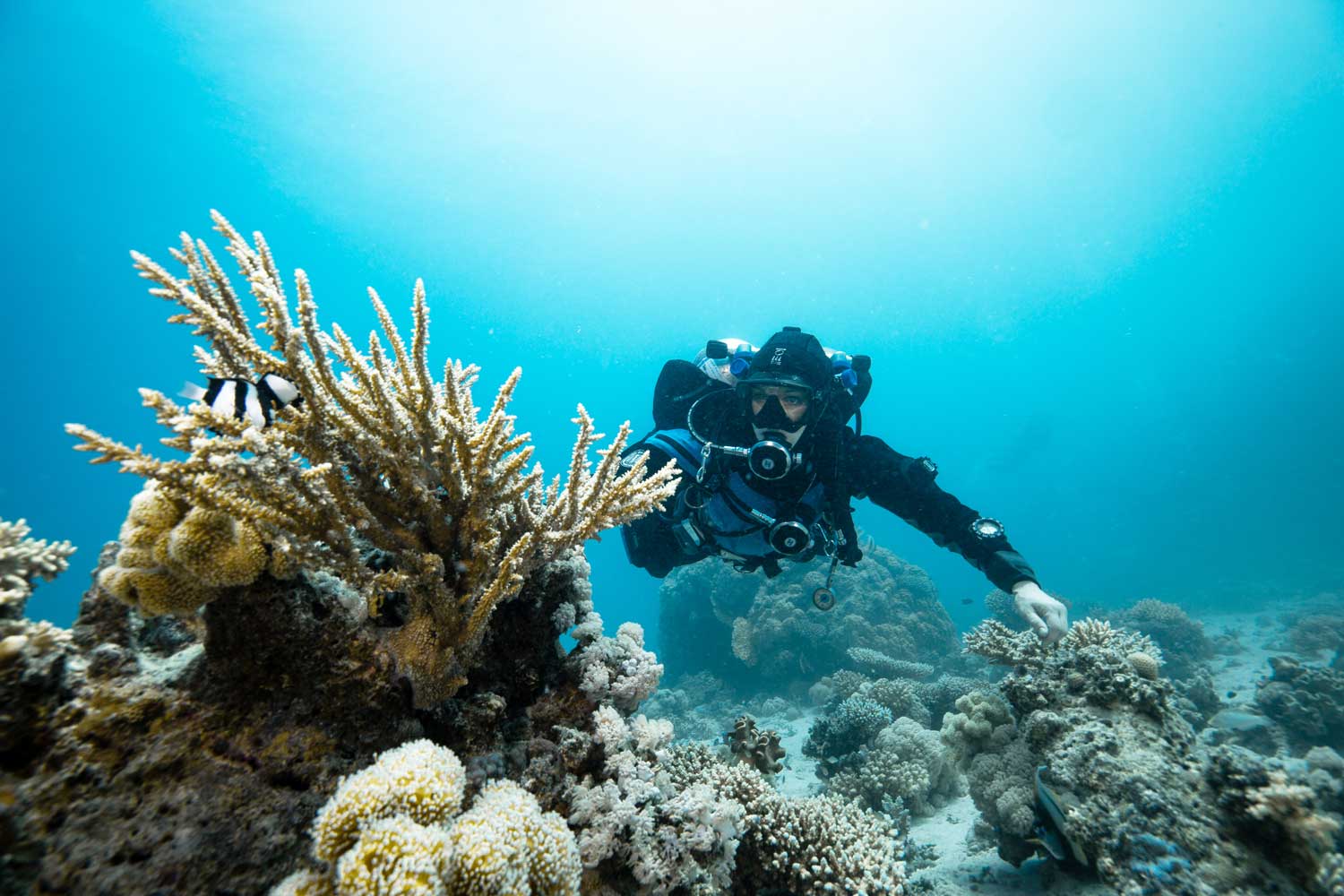 Metaphorically, as a passenger on their own small boat floating in perfect balance on the surface, the diver deploys the paddles to manoeuver and propel the boat, turn, reverse course to avoid collisions, and should conditions worsen, advance against a mild current. The efficiency of the propulsion comes from the strength given to the rotation of the paddles when their surface is exposed to the water, the chosen technique is applied using one side or the other of each paddle, while synchronizing their motion in order to produce the desired movement.

Fins are to a diver what paddles are to a small boat; they are propulsion and manoeuvring devices. However, it is important to note that there is metaphorically no “one size fits all,” nor one ideal pair of fins. As such, fins need to be chosen carefully, for each of their characteristics (apart from their colour) has its importance. Trying a variety of fins before purchasing the appropriate set can be challenging; it likely requires to visit a facility that has a wide range of models to choose from. However, during training, a proper assessment of the fins can be conducted in order to determine two critical elements that vary from one diver to the other, that is their appropriate weight and stiffness.

Needless to say that the size of the open heel foot pockets needs to match the diver’s choice of boots or rock boots in order to transfer the maximum power of the leg. As such, the fins straps should be tight enough to maintain the feet in position. Note that non-adjustable metal spring straps, which are covered with tubular webbing and screwed directly into the fins themselves are safer and more reliable than the traditional adjustable rubber straps with plastic mountings. They come in all sizes, and will never break or become loose.

Rubber and plastic are the most common materials used today in fin construction. Plastic fins tend to be longer and offer a narrower surface, and as such, might not provide the optimal propulsive power or maneuverability compared to rubber fins, particularly when it comes to fine tuning some of the finning techniques. Also, the longer the fins, the more damage they can create in overhead environments. It should also be noted that split fins, which are popular from a marketing perspective, don’t provide the diver with the proper support or efficiency over the range of appropriate finning techniques.

Some fins are more flexible along the blade than others, which also might not be the best option. Overly flexible fins can generate a 'wave’ effect , which ends up canceling the desired propulsive thrust. Typically, the stiffer the fin, the more power that can be generated through the kick. The downside is that stiffer fins are more demanding on the muscles and the joints. As such, every diver needs to find the right balance between flexibility and stiffness to match their own fitness. 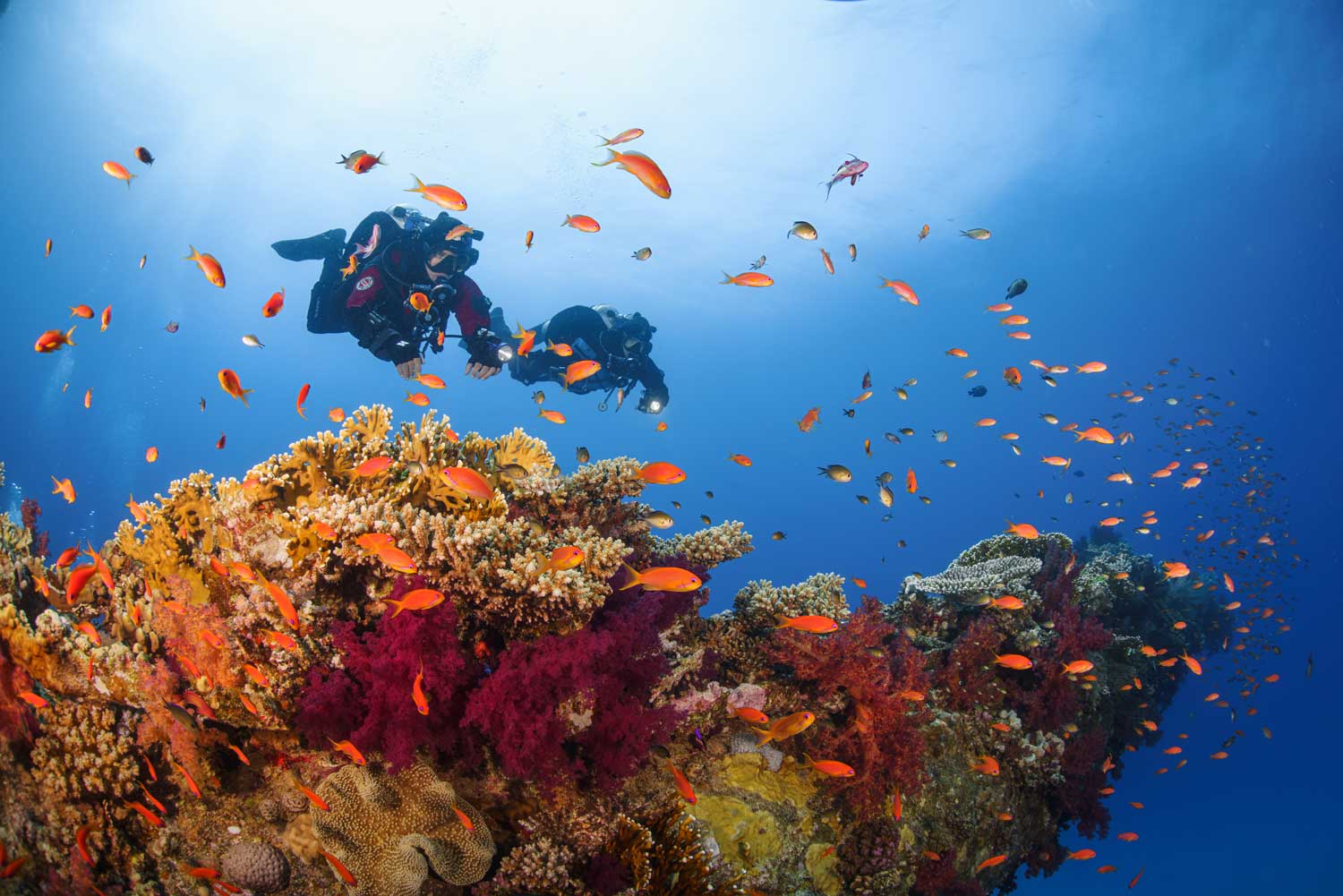 As mentioned above, another major criteria for selecting the right pair of fins is their weight. Fins that are too heavy, or too buoyant can potentially affect divers’ trim and eventually result in muscle fatigue and back pain. As individuals, every diver is unique when it comes to their weight and bone density, preferred suit options, be it a wetsuit or drysuit, and their choice of boots or rock boots. All of these parameters need to be assessed in order to determine the optimal  pair of 'glass slippers,' err fins, that will provide the diver with the proper propulsion efficiency and comfort, and be effective for manoeuvring.

Call it “the right tool for the right job,” but be aware that there are actually several different jobs involved: propulsion, manoeuvring and positioning. All of these require the use of specific techniques. Let's start by defining what is the proper technique is, and why the traditional swimmers' flutter kick, is not appropriate for divers.

A technique is a series of movements or kicks that aim at creating the appropriate power and efficiency, while minimising the impact on the diver’s gas consumption, optimising team positioning, and safeguarding the environment. Unfortunately, the flutter kick, which is a legacy inherited from swimming and early scuba diving, has been passed down and adopted by the recreational diving community, largely as a result of ignorance.  This kick alternatively brings both legs under the horizontal axis of the diver’s trim causing drag. It also requires continual muscular effort increasing diver’s gas consumption, and tends to produce a cloud of sand or silt  when used close to the bottom. This can damage the environment and create an unsafe situation for other teams of divers that might follow.

As explained in the "Doing It Right" (DIR) philosophy, the frog kick offers the most efficient conversion of muscular work into thrust of all the various propulsion techniques. Without going into an extensive description or decomposing and analyzing each of the component movements, the frog kick involves both an extension of the lower part of the leg, and a mirrored rotation of the ankles, which keep the fins above the horizontal axis of the diver’s trim. Each kick is followed by a gliding phase that takes advantage of the thrust produced by the power stroke to gain distance, and provides rest before starting the next kick. The intermediate moment when the forward movement slows, also tends to be a good indicator of one’s buoyancy control. This technique combined with the breathing cycle should allow one to exhale during the power stroke and inhale during the gliding phase, preserving and lowering divers' gas consumption, while protecting the environment from a silt out. 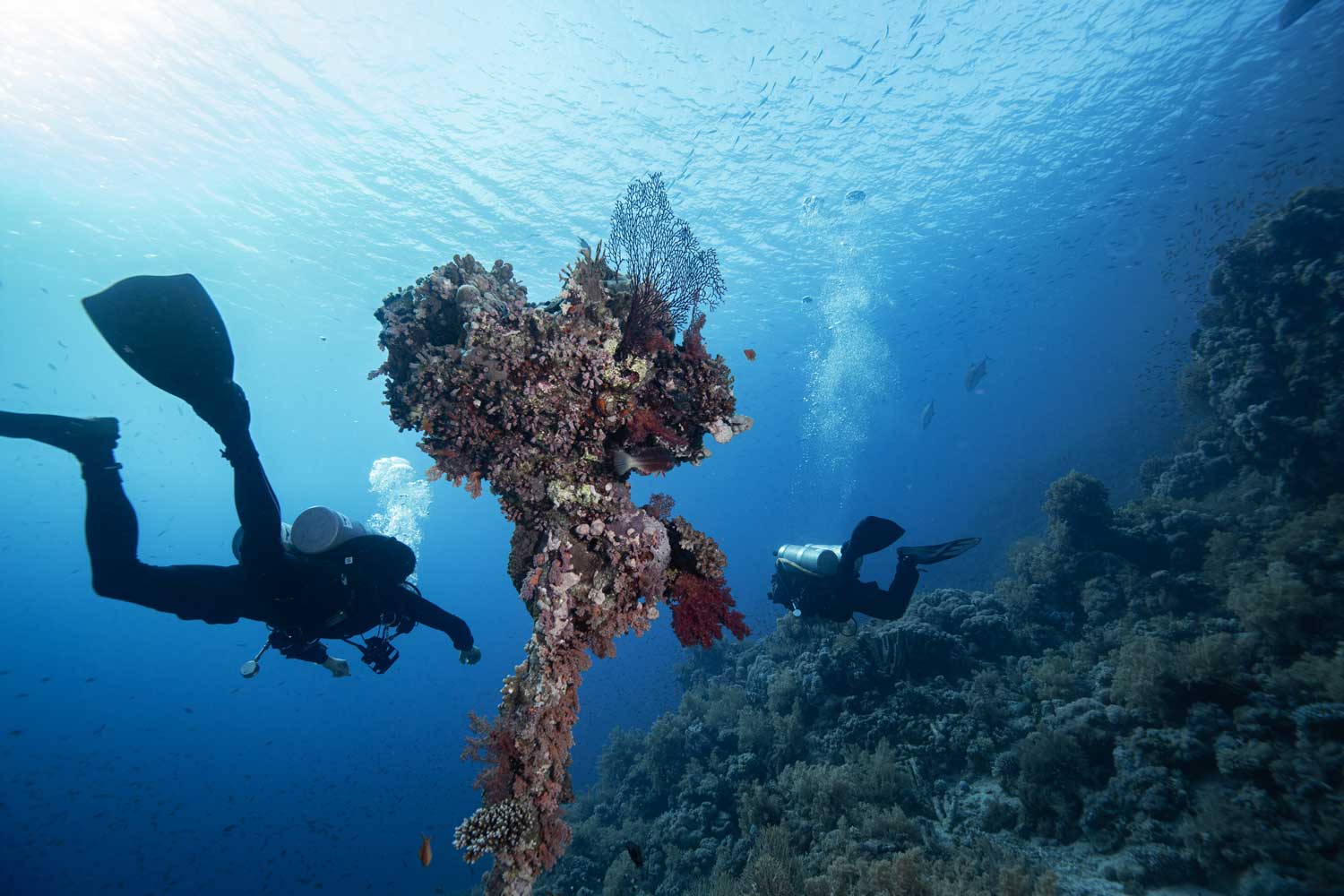 In a similar way, the back kick is executed as a reversed frog kick with a gliding phase. It is probably the most difficult propulsion technique to learn, and it can highlight buoyancy and/or trim control issues. As such, in order to develop proper muscle memory, it is best decomposed into its constituent components and practiced repeatedly as part of land drills—practicing each step of the movement while laying on the ground or sitting. Practicing on land helps divers to remain in trim underwater and identify whether they are correctly using the top surfaces of the fins combined with a proper rotation of their ankles, rather than conducting the kick from the hips.

The control of the upper body, including the extension of the arms, and looking forward is essential to maintain a proper trim during each stroke. A full back kick with the extension of the lower leg, enables a diver to reverse direction and move backward from a dead end. A modified back kick involving only the rotation of the ankles, helps fight the ‘magnet effect' between two divers facing one another, enabling them to maintain a suitable distance. As such, it enhances a team’s stabilisation during safety and or decompression stops, and controlled ascents and descents, as opposed to maintaining a suitable distance by pushing against each other’s fists, which destabilises divers’ trim. As mentioned earlier, sculling is another combined technique that can aid a diver make depth changes.

Some refined propulsion techniques are employed when the surrounding environment is space limited and there is a potential for a silt out. While they provide limited thrust, they are used for short portions of the dive, both for team safety and for the conservation of the environment. Amongst them are: 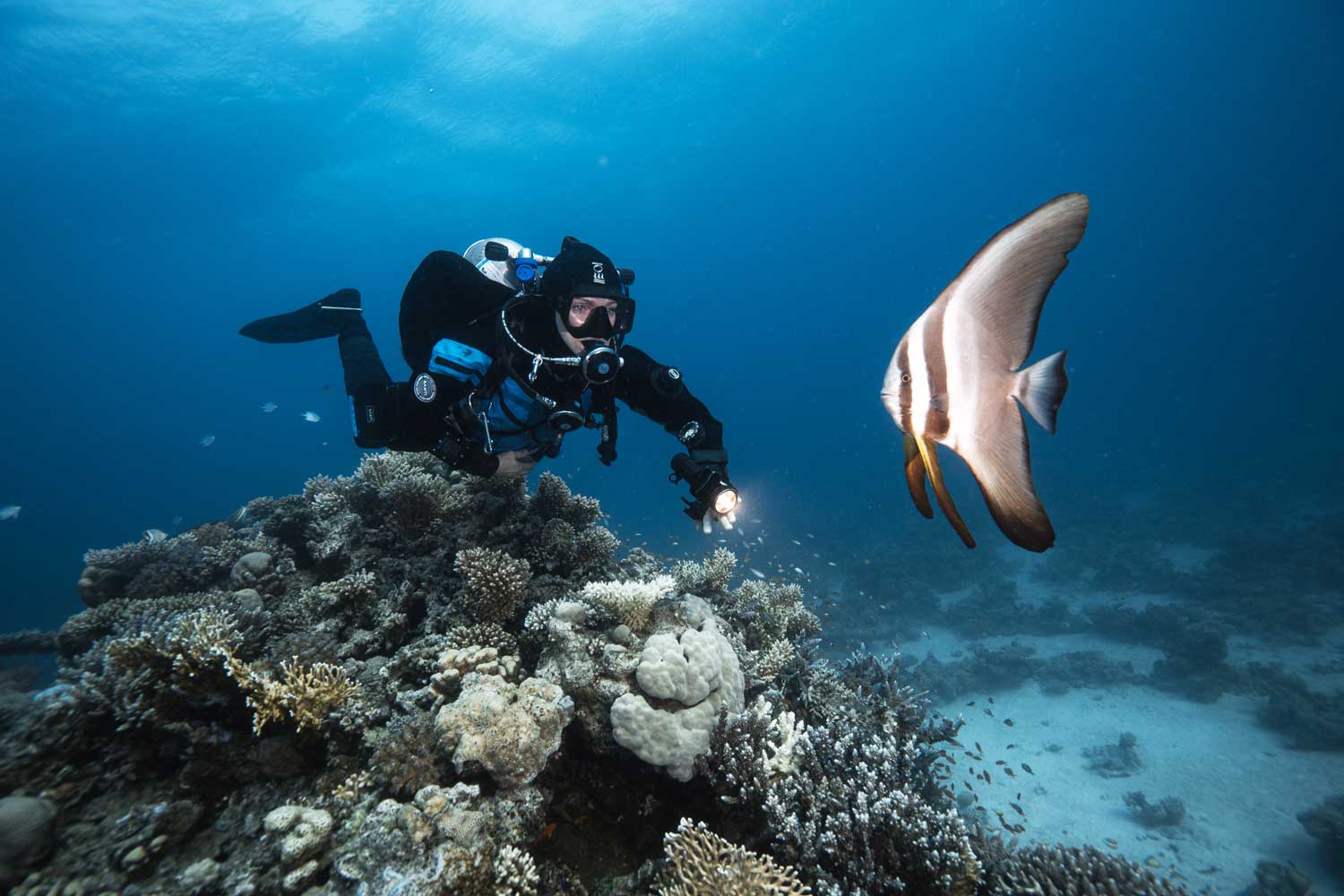 Other techniques are used for manoeuvring or repositioning purposes. The helicopter kick enables the diver to conduct an axial rotation by combining a simultaneous clockwise and anti-clockwise rotation of the ankles, with a slight extension of the lower leg part. This enables the diver to turn in order to reposition themself relative to the team, or with regard to the surrounding environment.

Last but not least, in terms of efficiency, hands have long been banished when it comes to diver propulsion, and so should they be. However, in terms of manoeuvring or repositioning, they can be used temporarily, when helicopter kicks would create environmental damage, for example, when a diver is too close to a fragile formation or silty wall. Divers might also experiment with a "crab kick," moving a hand together with a single fin to push away the water on one side of the body to move sideways, and not push against a wall or diving partner.

Proper breathing, along with good buoyancy control and proper trim are a prerequisite for efficient propulsion techniques. Paddling will not get one far if your small boat is unable to float horizontally on the surface.  At the same time, small boats will end up crashing into other boats or the shore if not propelled and or manoeuvred properly. The mastery of finning techniques is also fundamental to the team's effort and situational awareness.