Exploring Xulo, the cave of the swallows 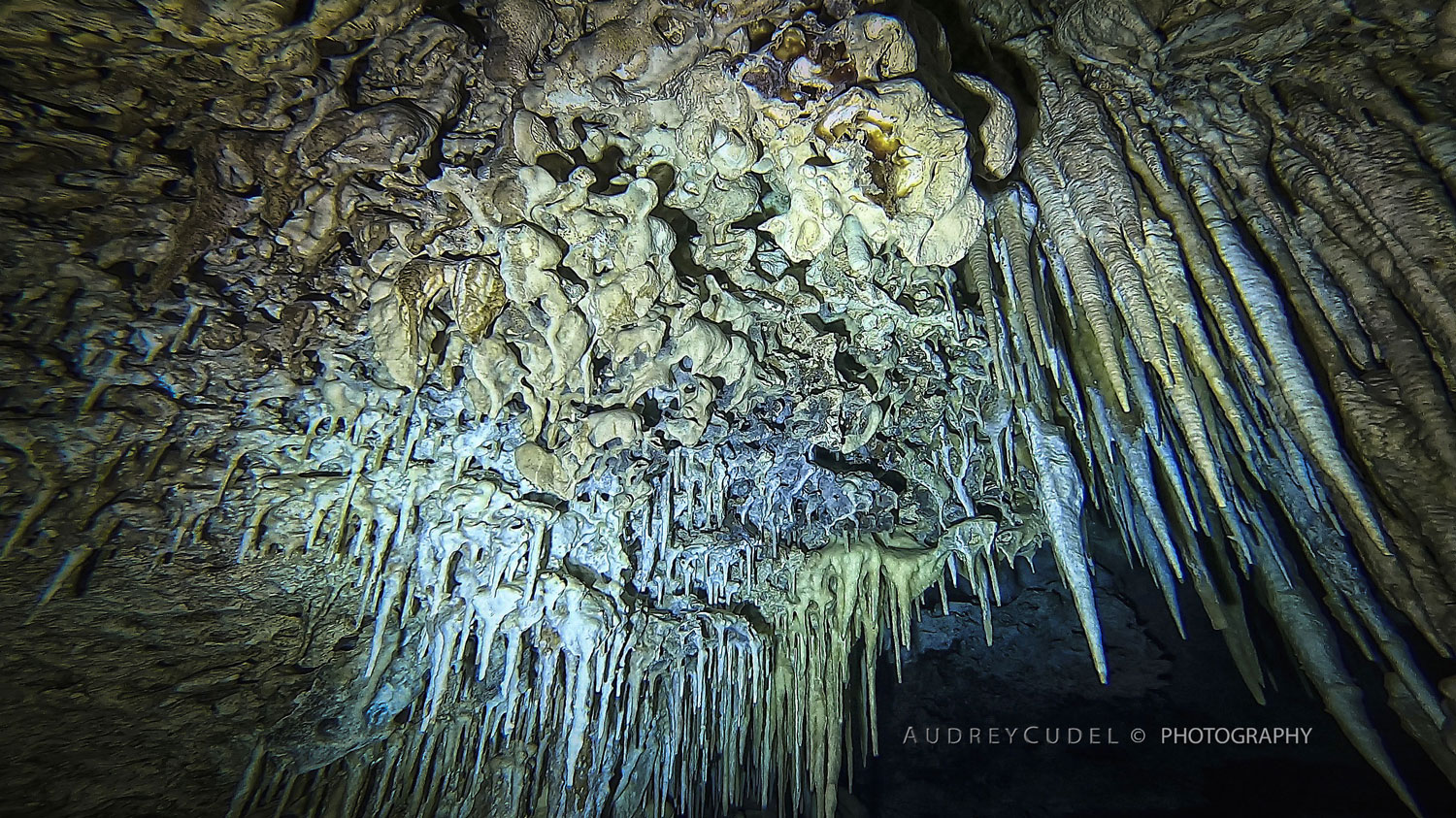 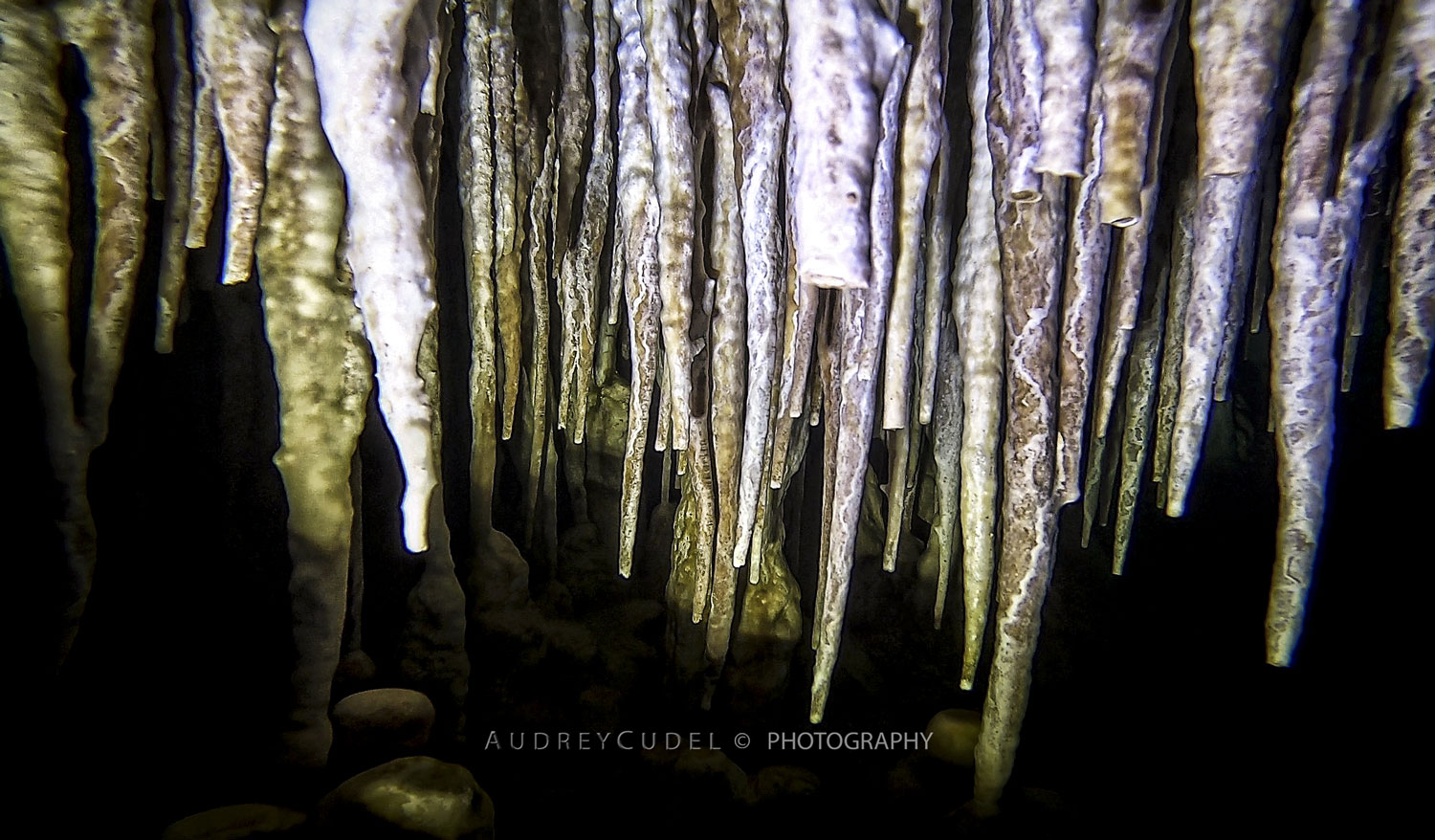 Today, the Yucatan Peninsula is probably considered as the Mecca of cave diving. Its flat karst landscape is underlain by an extensive aquifer accessible through thousands of sinkholes known as ‘cenotes," which are widespread in the northern lowlands.

The ongoing exploration and the discovery of new cenotes adds more kilometres every year to the known groundwater systems. It would probably take an encyclopaedia to describe the singularity and beauty of each and every single cave there.

However, some of them offer all a cave diver might be after: a succession of fine decorated rooms, a constant change of scenery, a variety of speleothems not seen elsewhere, shallow to deep phreatic passages, complex navigation such as a traverse to another cenote accessible after passing minor to major restrictions.

‘Uku Cuzam’ is also known as the ‘Cave of the Swallows’ (‘Cueva Golondrinas’). However to pay respect to the memory of the Mayan land owner who guarded the cave at the time of its exploration by Alvaro Roldan in 2013, most people simply call the cave XULO (Dzulo) after the owner.

XULO is one of four cenotes of the Caterpillar System which is considered small by Mexican standards despite its 13,452 meters of passages explored and surveyed to date. XULO stands out with its 1372 meters of large to extremely narrow passages. It is located at the exit of the village of Muyil which area offers a geology quite different from famous places further north between Playa del Carmen and Tulum. Located downstream Cenote Caterpillar, XULO’s location remains promising as it stands fairly close to the Doggy System. 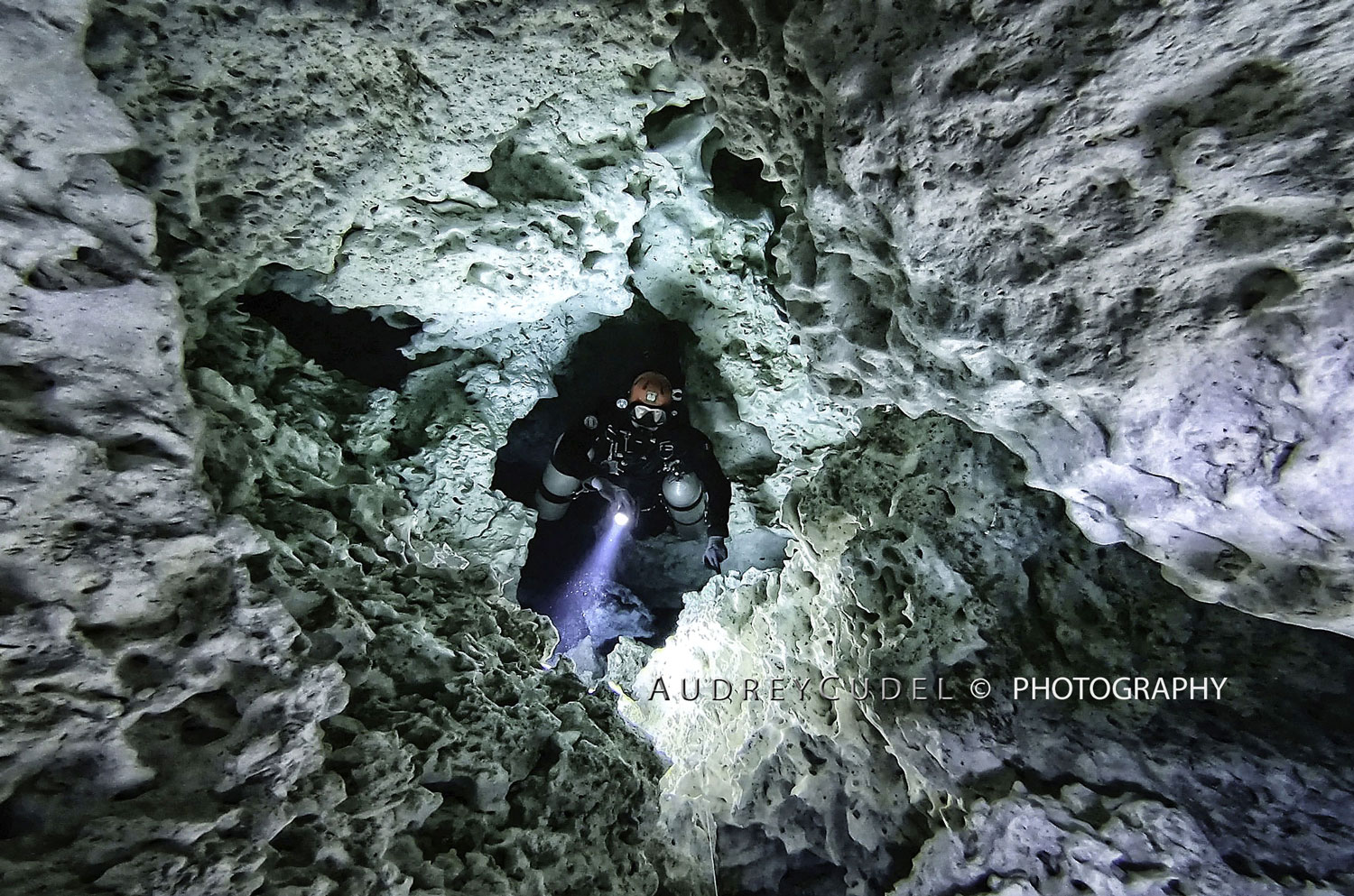 XULO is easily accessible by car since the cave is only about 200 meters from the highway and on foot as the water entry is only 20 meters down the parking area. The land surrounding the cave access is well looked after and maintained and some facilities were added a few years ago for diver’s convenience. Once the payment of the entrance fee is settled, the car will be looked after during the immersion.

A walk down a few steps from the parking area leads to a fairly large dry decorated chamber opening on a network of excavated tunnels. Additional large steps were built to facilitate the access to a shallow pool of pristine water surrounded by pure white stalactites. Tied to one of them, the main cave line surfaces from the restricted entrance. The enchantment peaks a few meters down as one swims through a huge, decorated cathedral-like room. 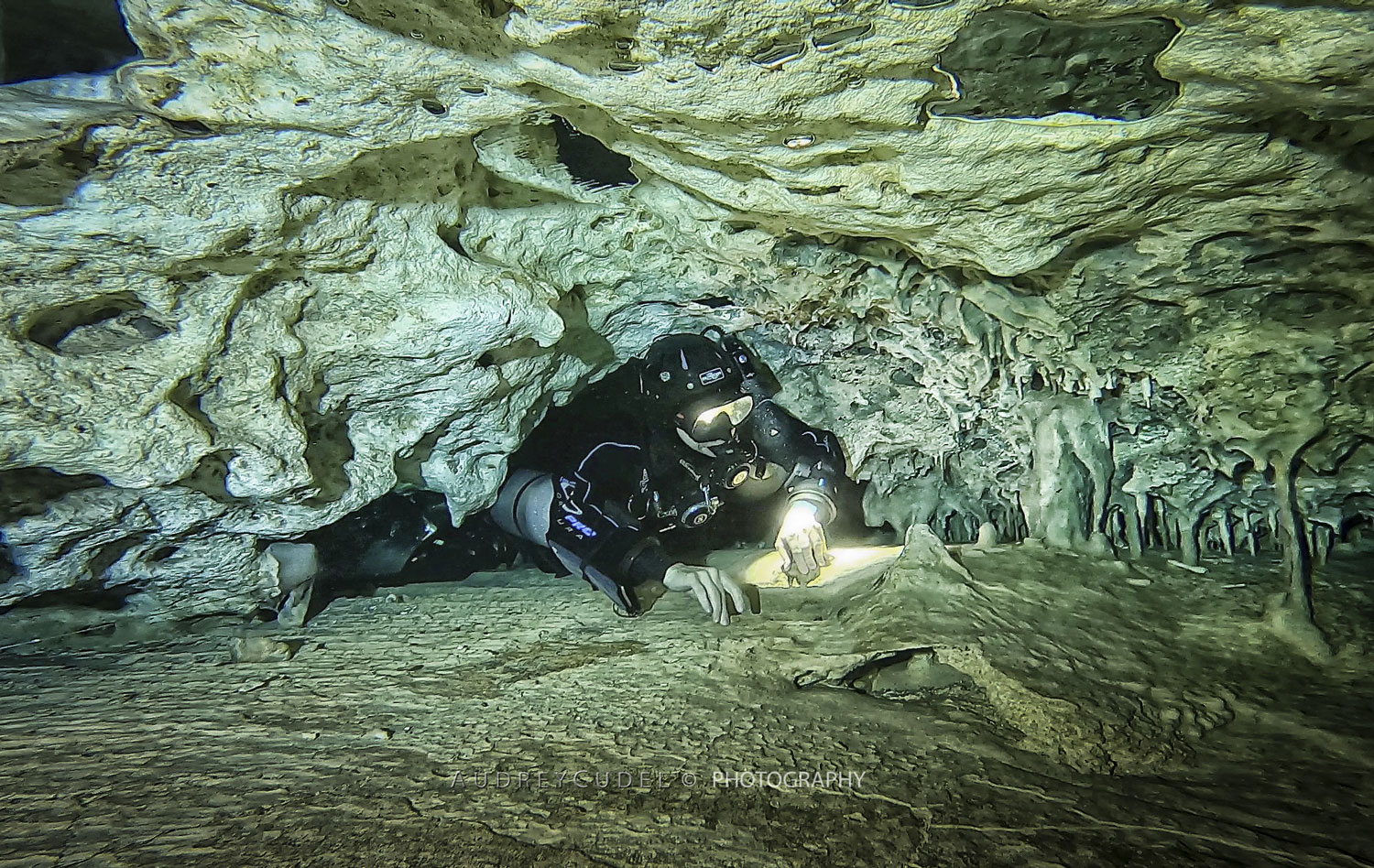 You can sneak through the door at the end of the room to enter a more tannic section where sulphur has left yellow and black markings layers on surrounding speleothems. Roots have invaded a partly submerged chamber that leads to the first shallow restricted passage. The reward lies on the other side as one enters a breath-taking gigantic room filled with another set of unique formations. Beyond shorter parallel sections that one can explore jumping off the mainline, there are two contrasting routes that are worth exploring.

The ‘Main Line’ leads to the deepest route with a brutal and total change of scenery. A tunnel of blue fresh water surrounded by unsteady pure white limestone runs down to 27.1 meters and ends up in a vertical shaft about 550 meters from the entrance.

Make the jump off the mainline at the marked arrows and you are on your way to the exquisite kilometre-long shallow traverse to Cenote Caterpillar that offers some additional complex navigation along the way. This path with a low decorated ceiling leads to a series of restrictions that one can only pass on sidemount if you care about preserving the cave. This route features loads of additional jump lines, some of which should not be followed for they would lead to more damage than discoveries.

According to the legend, the swallow symbolises courage, experience, and ability to navigate long distances and return to one’s home port. Those who dived XULO once, recognize it as a pretty unique home port to return to compared to other caves. 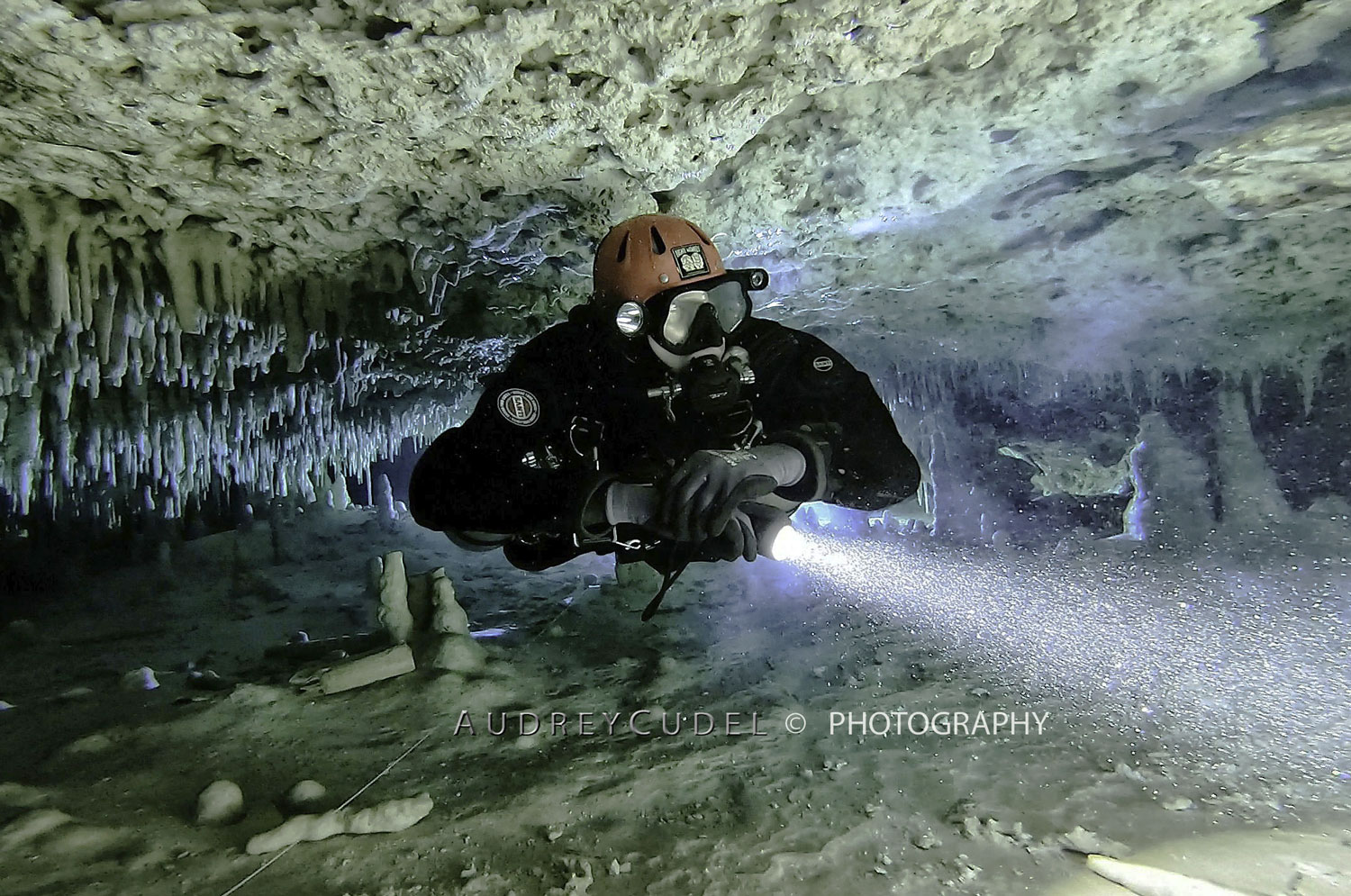 SEEK PROPER TRAINING AND STOP GOING ANY FURTHER IF YOU ARE NOT CAVE TRAINED. 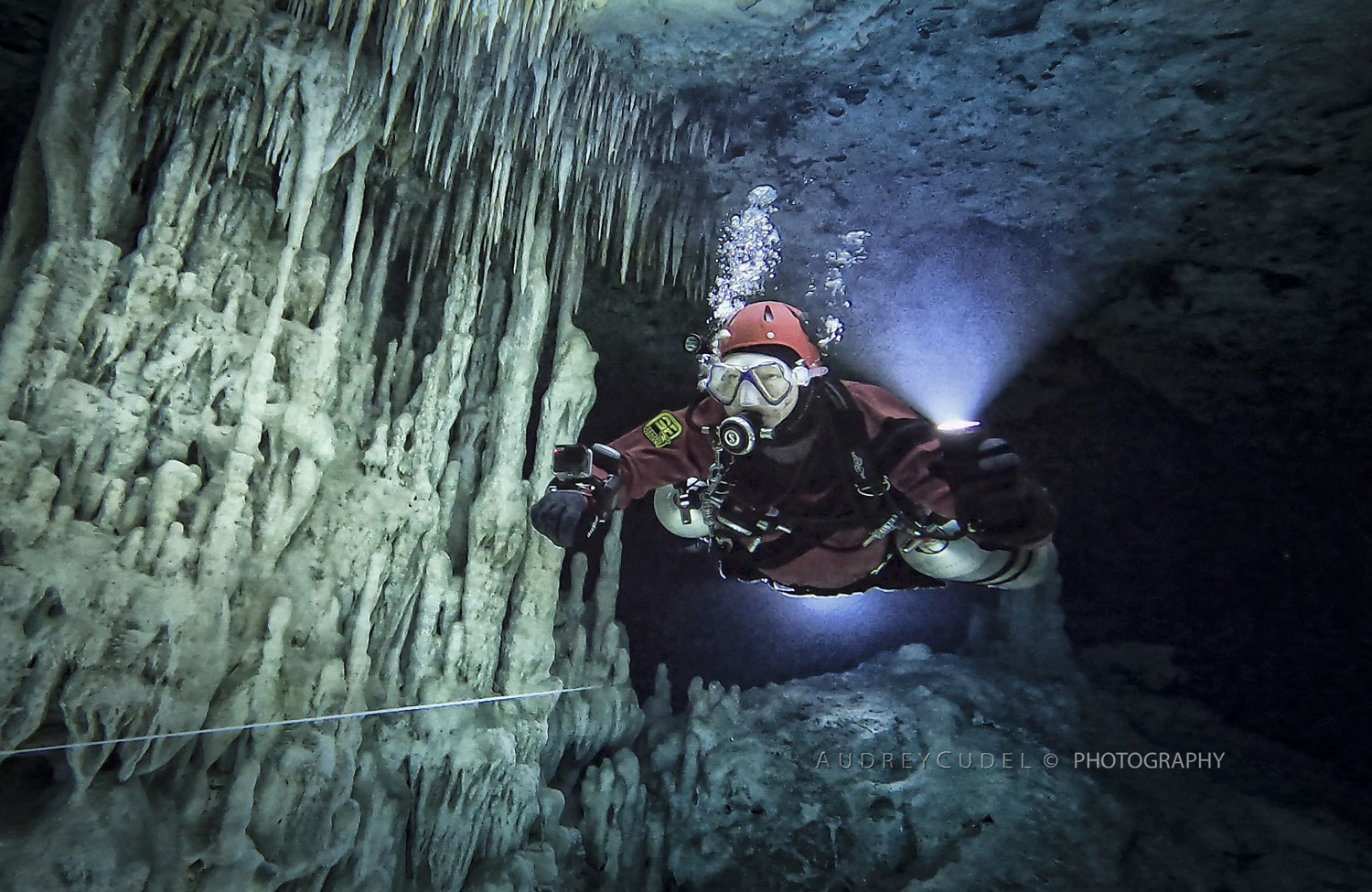 While the ‘Main Line’ karst environment is quite stable, some of the jump circuits lead to more fragile and silty paths where the visibility might turn from low to none. Consider the appropriate team size for such sections and apply anti-silting techniques to help prevent the obvious outcome. You must also be aware of your own limits and not blindly trust the line’s path and assume that a human body can fit where the line runs.

Among cave hazards, getting lost is probably the most threatening as it could potentially result in insufficient gas to get out. The navigation in XULO can range from extremely simple to far more complex. Overall the line and markings are fairly reliable however there is currently no detailed map. If you venture down one of the more complex paths, the use of proper navigation procedures including marking, referencing and using a compass is a must! In Quintana Roo, all groundwater systems flow south east to the sea. Though the flow is almost non-existent, if you become disoriented, knowing this bearing might help you chose a direction.

Keep in mind that your ‘back up’ exit option upstream to Caterpillar is a 90-minute traverse involving no more than a jump and a T.

So far, the area of Muyil does not offer regular cellular coverage, which means it's impossible to make an emergency call. It is a 20-minute ride back to civilization to contact the Divers Alert Network (DAN) or any potential rescue team and another 40-minutes to drive to the nearest hyperbaric chamber located in Playa del Carmen. 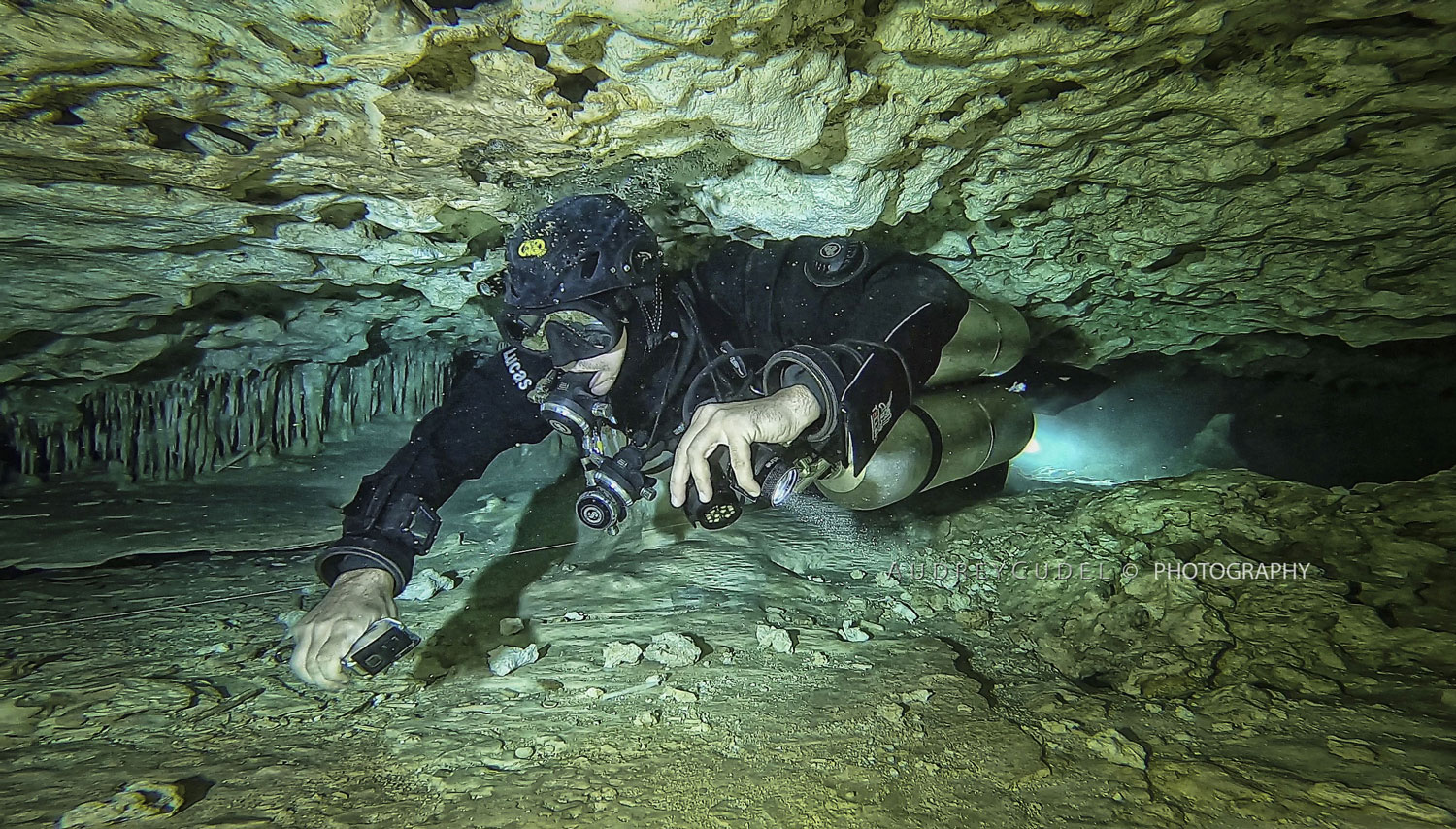 Cave Preservation: 'SOMOS LOS CENOTES' (We Are the Cenotes)

Since its exploration back in 2013, XULO has gone through many changes both on the surface and underground. At the surface, deforestation, excavation and new roads which lead to a plot of land that is currently for sale, have taken their toll. Sadly, on the traverse to Caterpillar, passages seem to have also grown larger as the number of divers visiting the place and the number of broken speleothems increase every year.

Over the past 30 years, the pressure on the environment has spread south from Cancun. A former fishermen village, Playa del Carmen has now turned into a major city with a population doubling to more than 200,000 from 2000 to 2020. The former quiet village of Tulum is now a hyped, overpriced place to where the population has exceeded its sustainable capacity in terms of waste water treatment, usage and resources management processes by a factor of four. These fast and uncontrolled expanding cities do not benefit from the necessary infrastructure nor education to preserve the surrounding natural habitat. 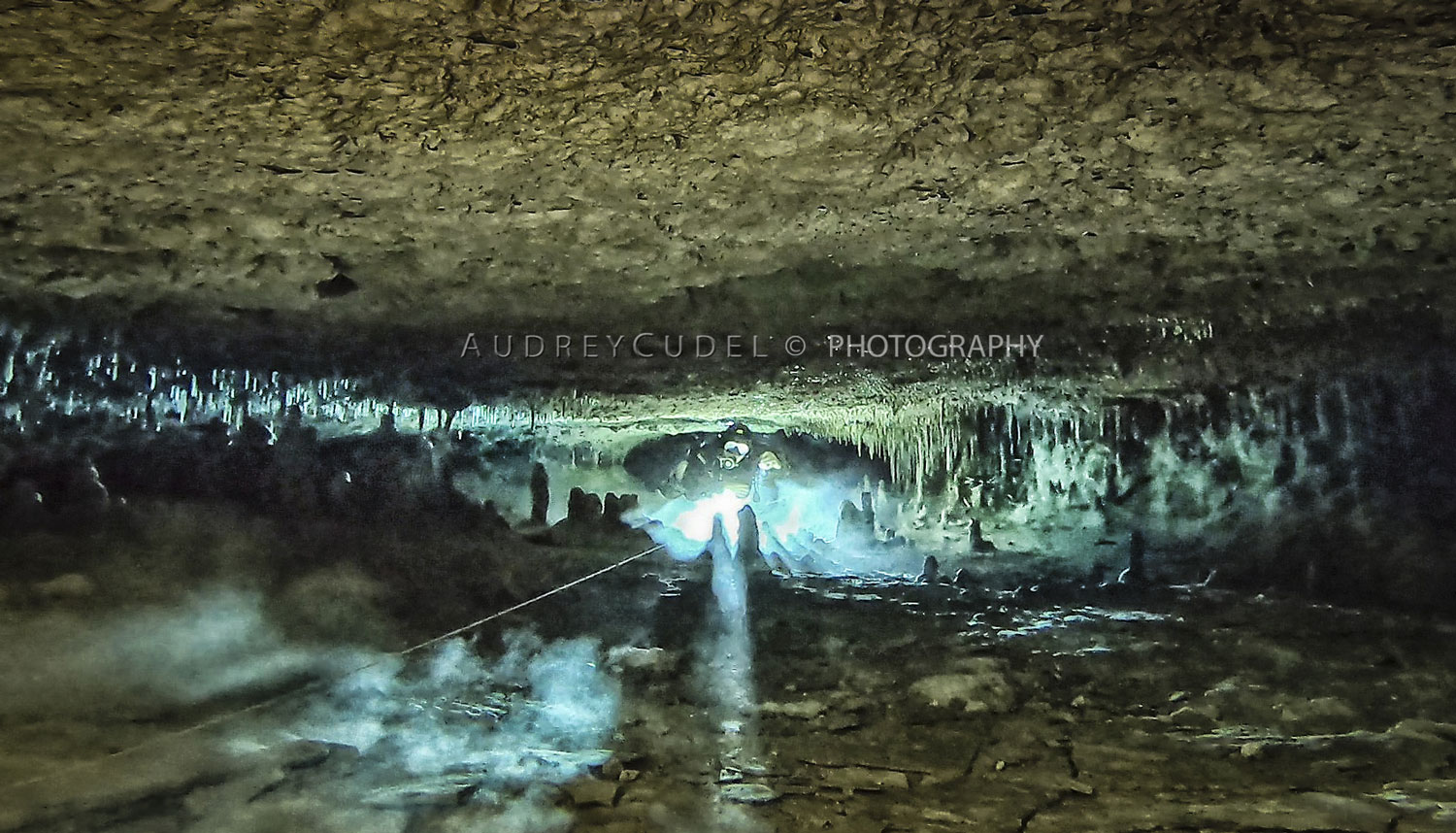 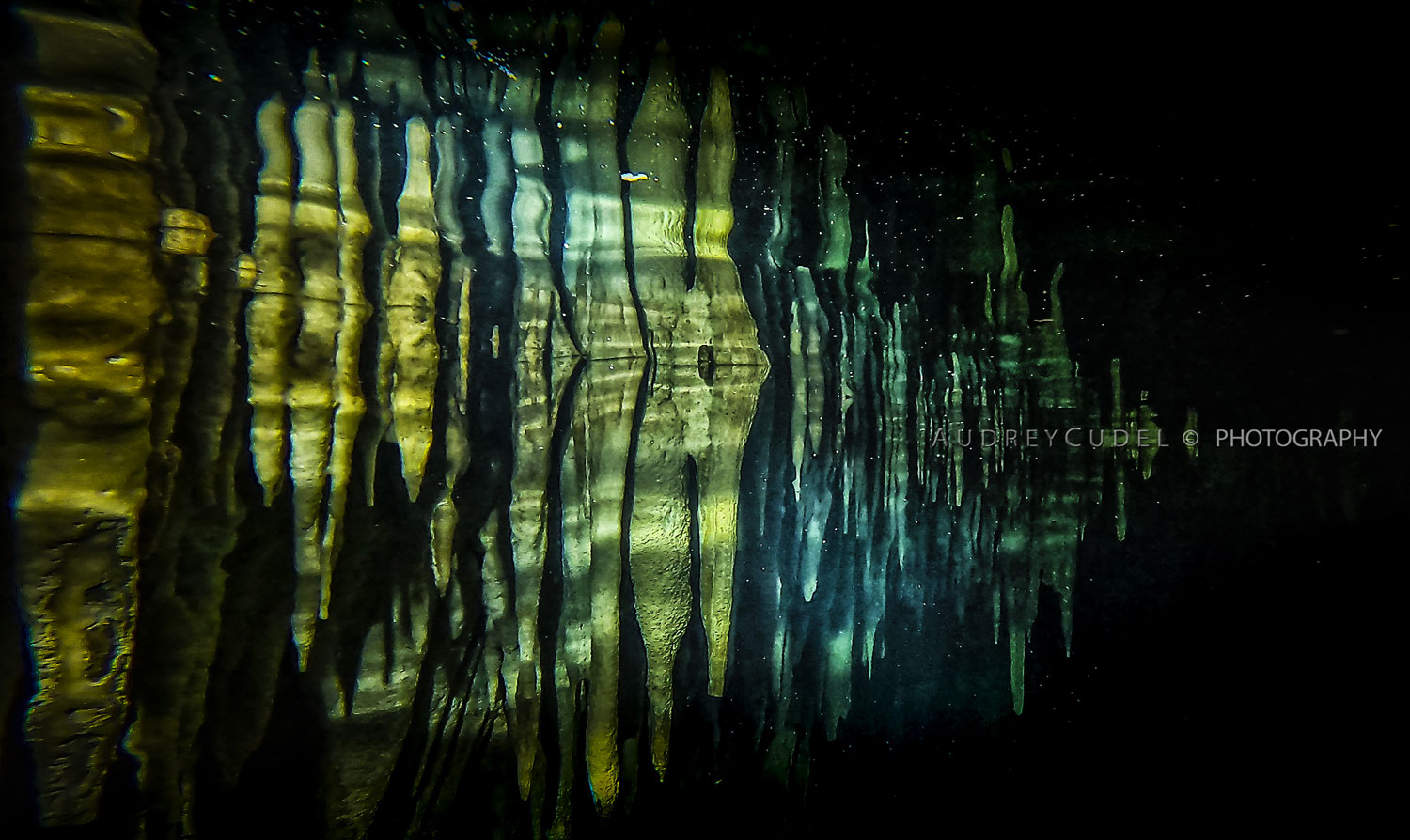 It is alarming that an area like Muyil could turn out to be next on the list. As much as some residents of the area fight the invasion of developers and tourism by making access to the cenotes more challenging, the impact has already been felt. Interconnected groundwater systems suffer from corrupted development programs that knowingly and aggressively spread waste into the aquifer.

Among organisations fighting for this worthwhile cause, ‘SOMOS LOS CENOTES’ (We Are Cenotes) is one of the few bringing awareness about how vital these iconic wonders such as XULO truly are, and fighting the impact development is having on this overall stunning region.

If cenotes are under threat, we all are, for they are source of life and vital to our natural wellbeing. Sustainability and conservation are not synonymous with non-development, but rather require a controlled, responsible and preserved way of interacting with our environment. 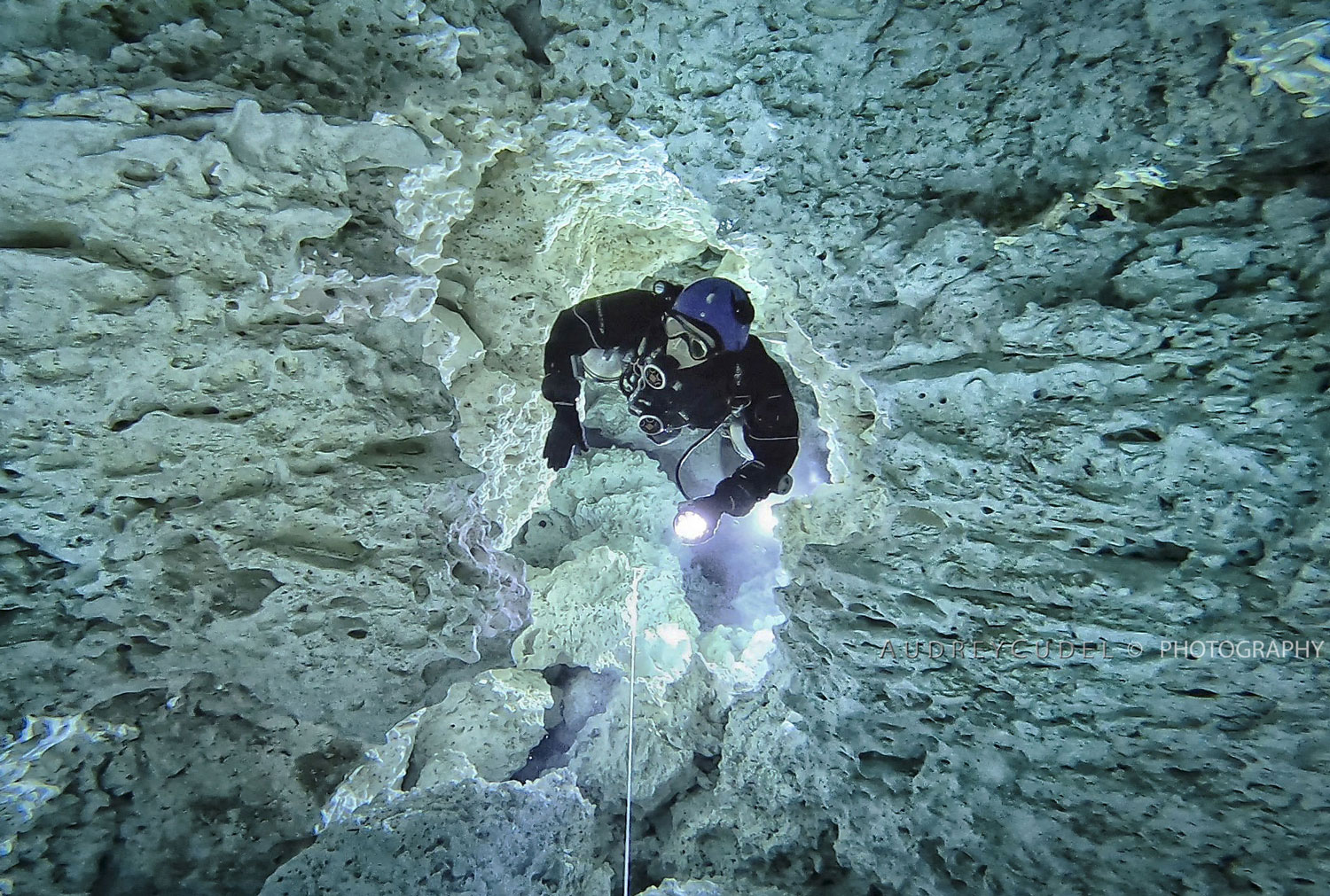