His past experiences, his present achievements and his future explorations with DAN Research: “Safety secures Success".

Andrea is an ‘instinctive’ freediver, innovator and international champion. Beckoned by an impulse to move to Sharm el Sheikh, Egypt – to work as a diving instructor – he eventually found himself in the midst of the greatest freediving champions of all time; later becoming the pioneer of a freediving technique called “Aware Equalisation.”

- Andrea, you seem like someone who grew up at the water’s edge. Have you always had this love for the sea?

I was born and raised in Rome, Italy, and I spent every summer vacation with my parents at the beach until I was 17. We would go out each morning by dinghy, and not come back until late afternoon. I spent literally everyday in the water, and I found that it felt more natural to me to be underwater than out of it. My parents told me how, at only three years old, I would go underwater with a swim mask.

- Then you started diving with SCUBA

My instructor was “old school,” and before teaching me how to SCUBA dive, he made me do two months of freediving in a pool. Maybe it was during that course that I found my love for the sport. A few years later, I decided to leave my regular job in Rome and move to Egypt as a full-time diving instructor.

- So how did you get into freediving?

At Sharm a friend of mine challenged me to do an apnea dive and I accepted. We reached 30 meters depth. The next month, whenever I had a day off I would go to Ras Umm Sid (a deep coral reef that’s accessible by land), and already by the fourth day of practice I reached 50 meters. That’s when I realized it was time to take a course. I was descending to consistent depths, without any preconceived notions. Today I realize what a risk I was taking with those first dives! 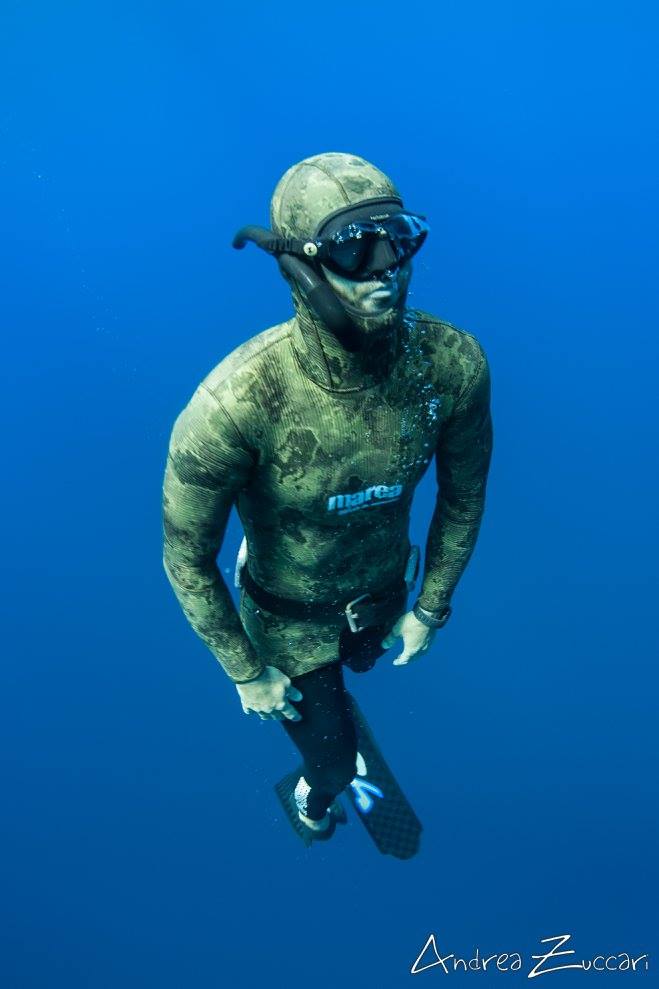 - Sharm el Sheikh is an important part of your history… and your life story, isn’t it?

I would say it played an essential role. At Sharm there was a branch of Apnea Academy Red Sea, the training organisation founded by Umberto Pelizzari. There I met Riccardo Mura, my instructor, who later became my coach. Living in Sharm, I could train whenever I wanted to. Only 10 months after the start of the freediving course, I participated in the world championship, and made 7th place with a dive at 51 meters depth in Constant Weight Without Fins.

- Were there any moments of fear?

I have always been very competitive, and this is what allowed me to reach great depths quite quickly, but not without difficulties. At that time, freediving was mostly about being able to reach the surface and say “I’m alive? Yes. Alright, so now I can dive even deeper!” Often after a deep dive I would cough up and spit blood (hemoptysis), or lose consciousness. But, no, I never felt fear.

- Tell me about a wow moment

When I first started freediving, I would download all the films and documentaries I could find on the subject. Many of them featured Umberto Pelizzari. Watching those videos, I dreamed about breaking one of his records, which happened eventually in 2013. I had just recently opened the Freediving World Apnea Center, and in January of that year I made a descent to -155 meters, establishing the new Italian record for No-Limits apnea, and surpassing Umberto’s 10-year long record. In No-Limits you descend with the aid of a weighted sled, and return to the surface using an inflatable lifting bag. This is the method that allows you to go the deepest. It is called No Limits because there are no limits to the weight on the sled; there is no limit in the speed at which one descends or surfaces; and there are no specifications for the design of the sled itself. In July 2015, I set a new Italian record, diving to -175m, and took second place behind world record holder Herbert Nitsch. 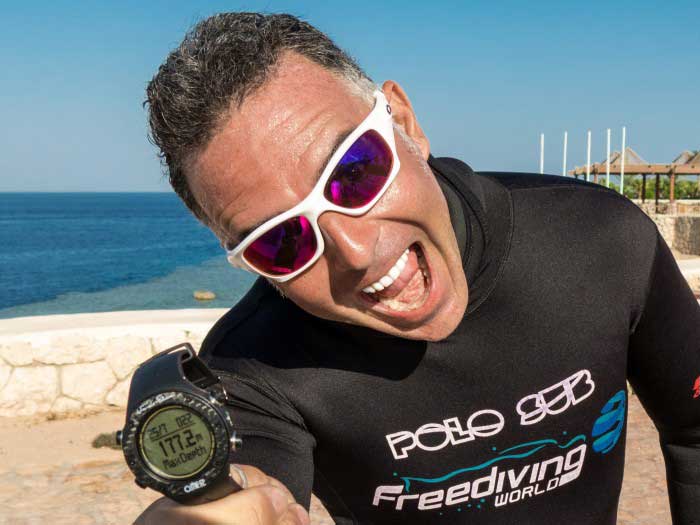 - Most diving- and freediving instructors pride themselves on diving safety – like a badge of honour. What does diving safety mean to Andrea Zuccari?

I admit that I’ve had a very fortunate start. Today, I view the sea and its depth with greater respect: I strive to be more aware, create protocols, and work with long term training programs. In doing so, many of my dysbaric issues have greatly diminished. This summer, while I was in training to beat the Italian record for Constant Weight (the current record is -104m), I reached -105 meters more than once, but I decided not to try to break the record then. I was aware of having reached my limit, and I did not break the record at all costs. So, I decided to wait until the following year when I could do the dive and be certain of my results. Diving safety is fundamental to me now, it is more important than personal achievement.

- What is a typical day like in the life of a deep diving man, a champion?

When I’m preparing for a record attempt, my day starts at 6am, I’m in the water by 7:15 for training; breakfast at 8:30; and then ready to work in the diving center at 9am. Usually I keep "dry" in the morning and give theory lessons. Then in the afternoon I go back to the water, with my students or other athletes.

- What contributions or discoveries have you made in freediving?

When I started my first SCUBA course I didn’t even know what equalisation meant. It was just something I did naturally. When I became an instructor, however, I discovered that I had to teach to others. So, I started to learn about it, deepening my knowledge, and I later developed a method which I call Aware Equalisation. Today, I teach equalisation for Apnea Academy, and I hold workshops on the topic all over Europe.

The world record in Variable Weight apnea (you descend to maximum depth with the aid of a weighted sled, and surface unaided by finning or pulling yourself up along the rope). The current record is -145 meters. My personal record in this category, which I established in 2013, is -135 meters. 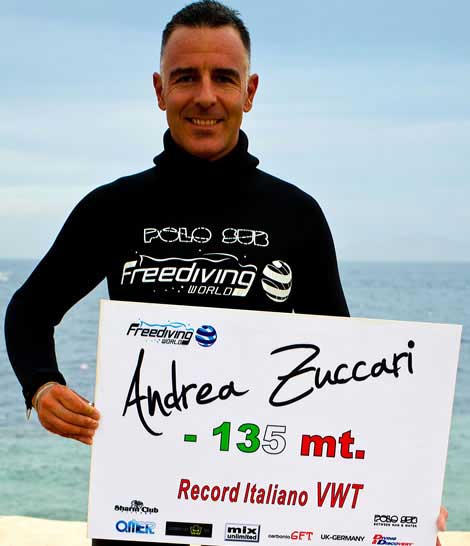 - But the real dream of Andrea Zuccari is the world record in No Limits, right?

The current record is -214m, and I promised myself to take on that record only if I’m followed by an equipped and well-trained medical team. To do a dive of that kind it is necessary to have various medical specialists at hand: a cardiologist, neurologist, pulmonologist; and not only the day of the record, but during the final months of preparation. The medical-scientific knowledge on the physiological response at such a depth is still very limited, so I would only feel confident in attempting a dive of that magnitude with an experienced team. I would not put my life at risk to achieve it.

Shark & Yolanda Reef in summertime. That is, when I can be there very early because boats full of scuba divers start arriving at 9am, which can be dangerous for freediving. I’ve been diving in that spot for years, and I’m still amazed at the colors of the coral, the 780 meters drop from the wall at Shark, and the enormous quantity of fish that gather there from May to September.

- And finally, you are also a DAN Member and DAN Research participant?

Yes! I signed up with DAN as an instructor originally. Following that, I participated in several DAN Research Foundation initiatives: In 2014, I underwent some testing related to a study on predisposition to pulmonary edema (Study Awarded with International Awards, read the article on Alert Diver). Then I was invited by DAN researcher Danilo Cialoni to Y-40, the deepest pool in the world, where I was examined underwater for PFO in freediving.