It's 1952, and five years still need to go by before the premiere of 'The Silent World' award-winning movie by Jacques Cousteau and Louis Malle, but scuba diving and the underwater world already tickle George Shed's fancy, who among others, is the creator of Capitan America. From his pencil work, Marlin Keel comes to life, blond and dashing oceanographer; the first scuba diving hero, maybe the first to wear a mask and fins, besides the usual deep-sea diver gear and helmet.

The strips come out on the Sunday Comic Strip in 1952, but it is maybe too early for a public who thinks diving is an activity intended only for professionals and navy special forces units. Marlin Keel goes out of print in 1954. Scuba diving on paper will have to wait until 1956 and be content with sporadic episodes of Fightin’ Navy, Charlton Comics Group, and Marvel's Navy Combat, stories set during the recent World War.

Coincides with the years of 1960 - 62. The 007 movie Thunderball is still not out, but the comic strip authors already know what's going on around. Diving documentaries are on the increase. Masks, fins, tanks and breathing apparatus guarantee an unprecedented freedom of movement. The first scuba equipment for recreational divers makes its appearance in marine and fishing shops. Scuba diving emerges in the collective imagination and knocks at the door of creative minds. ‘What if’, primeval spark of any fiction series, finds its foothold in the collective curiosity, in the underwater experience that has become accessible to a greater public. Scuba diving bursts into both adventure and Disney comics.

From Mandrake to Tom & Jerry, from Johnny Hazard to Donald Duck, in 1962 practically all the famous characters go diving with masks and breathing apparatus. No one wants to stay dry and miss out.

In the same year the first dive heroes come to life, with their dedicated series. 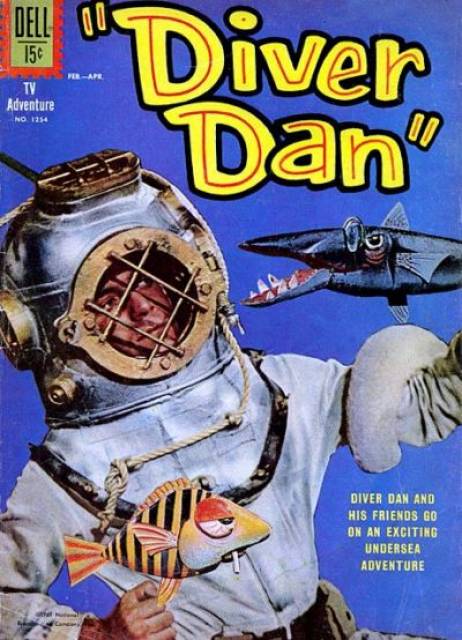 Dell Comics, taking inspiration from a successful kids’ TV series, publishes Diver Dan, a hero whose configuration is still that of a deep-sea diver, yet it will be the Frogmen to leave a mark on the hearts of readers and collectors alike. The heroes are Steve Randall and Jim Collins, underwater investigators and ex-navy personnel, Second World War veterans, faced with mysteries and crimes to solve on the bottom of the sea. 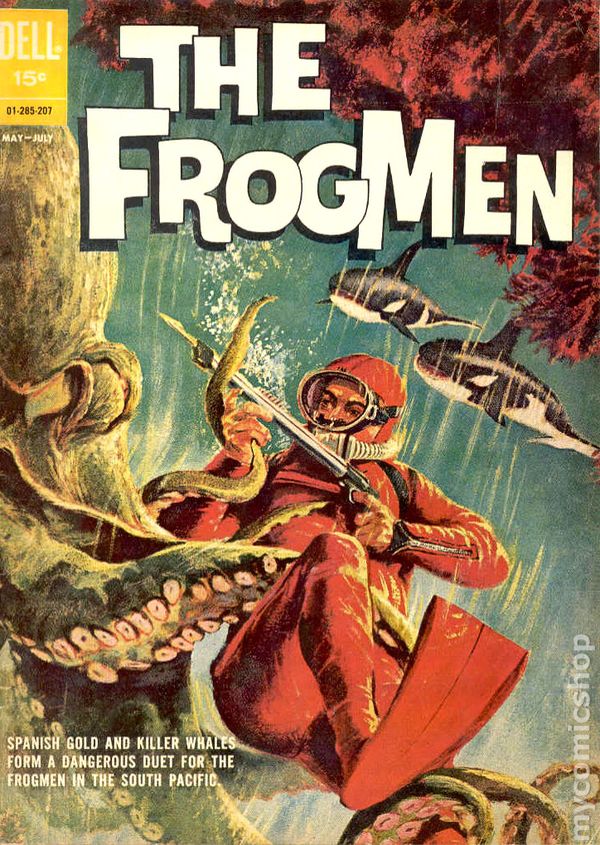 Scuba equipment, except in dedicated comic strips, is almost always a source of worry. Ducks and other children favourites dive with transparent globes that call to mind a goldfish bowl, regulator hoses come and go, and BCDs even in the ’80s - '90s remain more or less unknown. Indispensable supplies are instead axes, knives, harpoons and shotguns, and mines.

Dismembered sharks, giant squids blown up, killer whales. Marine creatures are regarded as space monsters. In that hostile environment the enemy is not the non-observance of diving tables, but its mysterious inhabitants. An applause goes to the sexy comic belonging to a non-horror trend: the sea as an alcove, corals as lace tablecloths in a romantic restaurant, as well as to the ducks that neutralize a ravenous giant squid with a barrel of pepper.

In the ’60s and ’70s the ones diving, if they weren't ducks or cats were heroes, adventurers able to face deadly risks over breakfast. Nowadays anyone who feels like completing a short diving course can dive, bringing with them the doubts and self-irony of the Peanuts characters. Dive comics shrink to a few strips and cartoons; in the era of niches and specializations they become an item for divers. 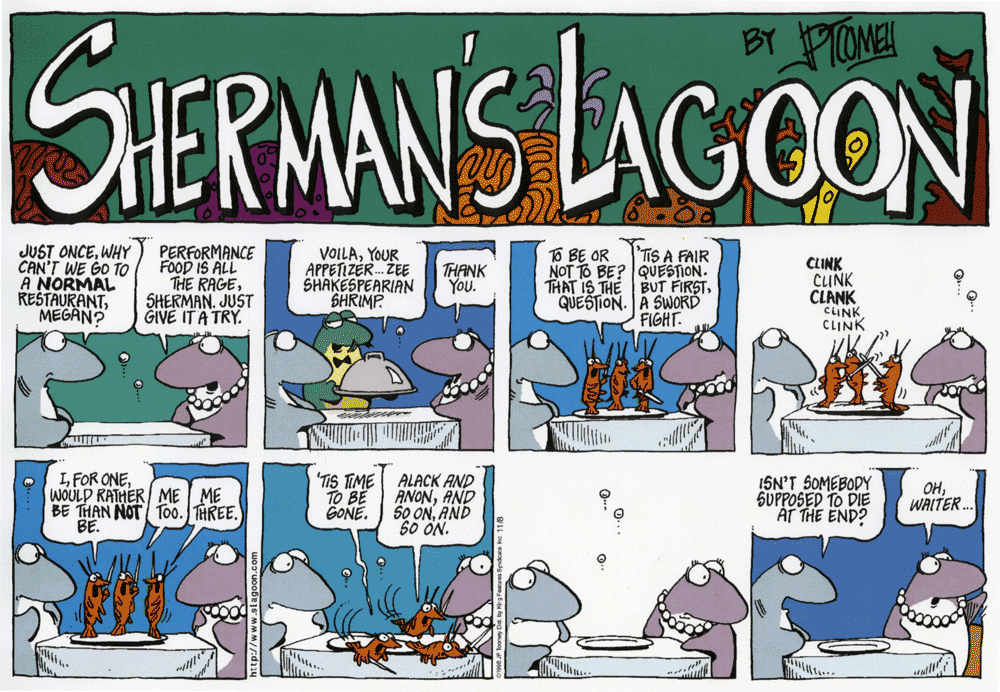 From the strip in the column Beachcomber, on Diver, to Sherman’s Lagoon, the characters most of the times are fish and deep-sea creatures that comment on our presence in their own homes, or divers faced with surreal situations, and with their neuroses. 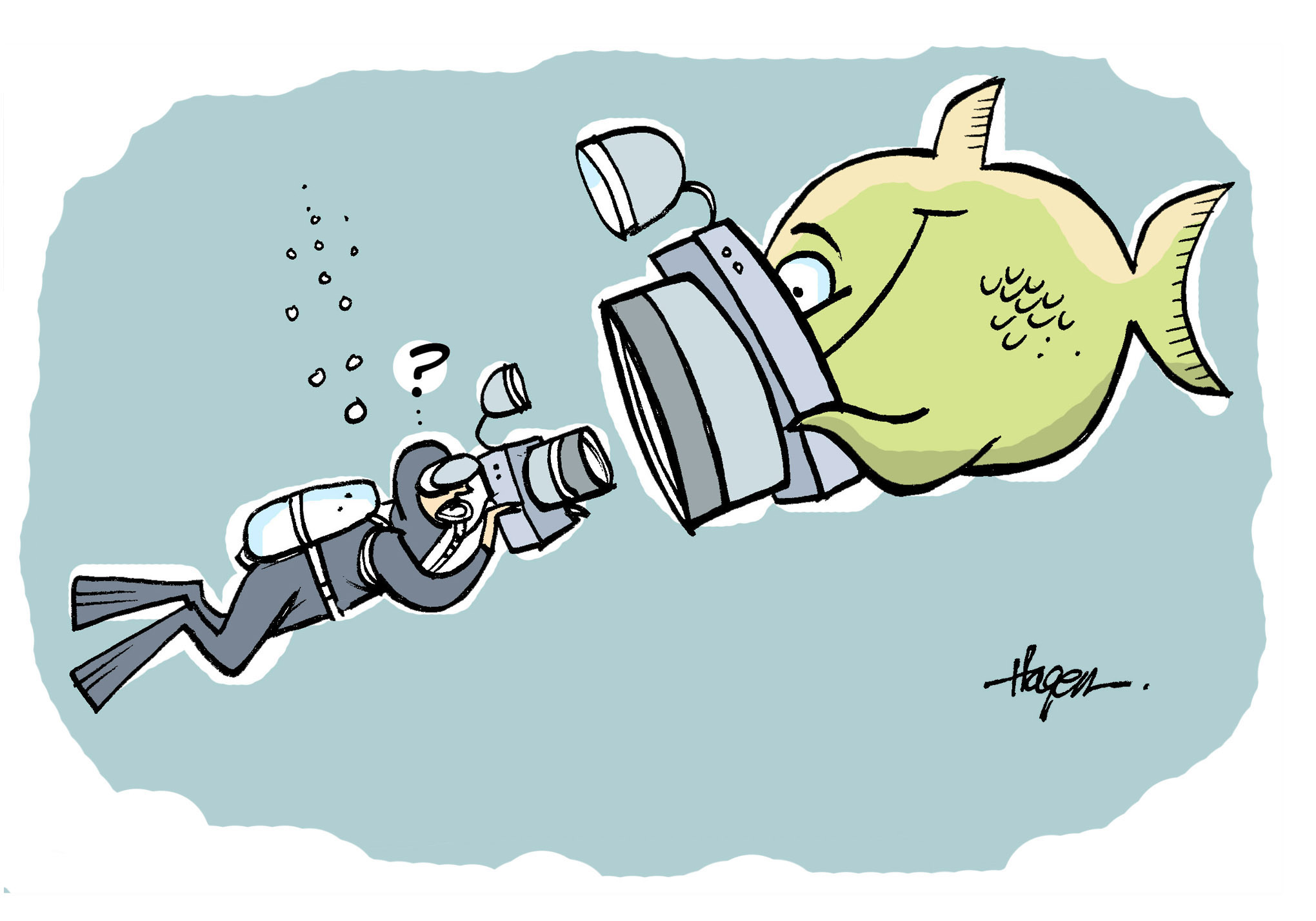