The only hydrothermal chimney in the world you can dive at

When scuba divers think about Iceland, they will most likely have images of the famous Silfra crack in their minds, a tectonic fissure filled with cold, crystal clear, glacial water close to Iceland’s largest town Reykjavik. But what much less divers know is that in the far north of Iceland there’s another unique and even more spectacular dive site: the hydrothermal chimney Strýtan.

Strýtan is the only known hydrothermal chimney that is within scuba diving range. All other discovered hydrothermal chimneys - also called „black smokers“ or „white smokers“ (depending on if the water they emit is smokey black or clear), lie in the deep sea, in depths of 2.000 – 6.000 m, and can only be reached by submarines.

Geologically, Iceland is situated right on the Mid-Atlantic Ridge, where the continental plates of Eurasia and North America are moving apart by about 1-2 cm per year. This process is continually tearing up the island, causing earthquakes and eruptions of lava that fill the rift valleys. As if that weren’t enough tectonic activity, Iceland also sits on a hotspot or so-called mantle plume, where upwellings of hot magma directly from the core of the Earth feed huge volcanoes, many of them sleeping beneath massive glaciers. Iceland is a restless place - its nature constantly being reshaped by fire and ice. This process has also created Strýtan, the only hydrothermal chimney in the world that you can scuba dive at. 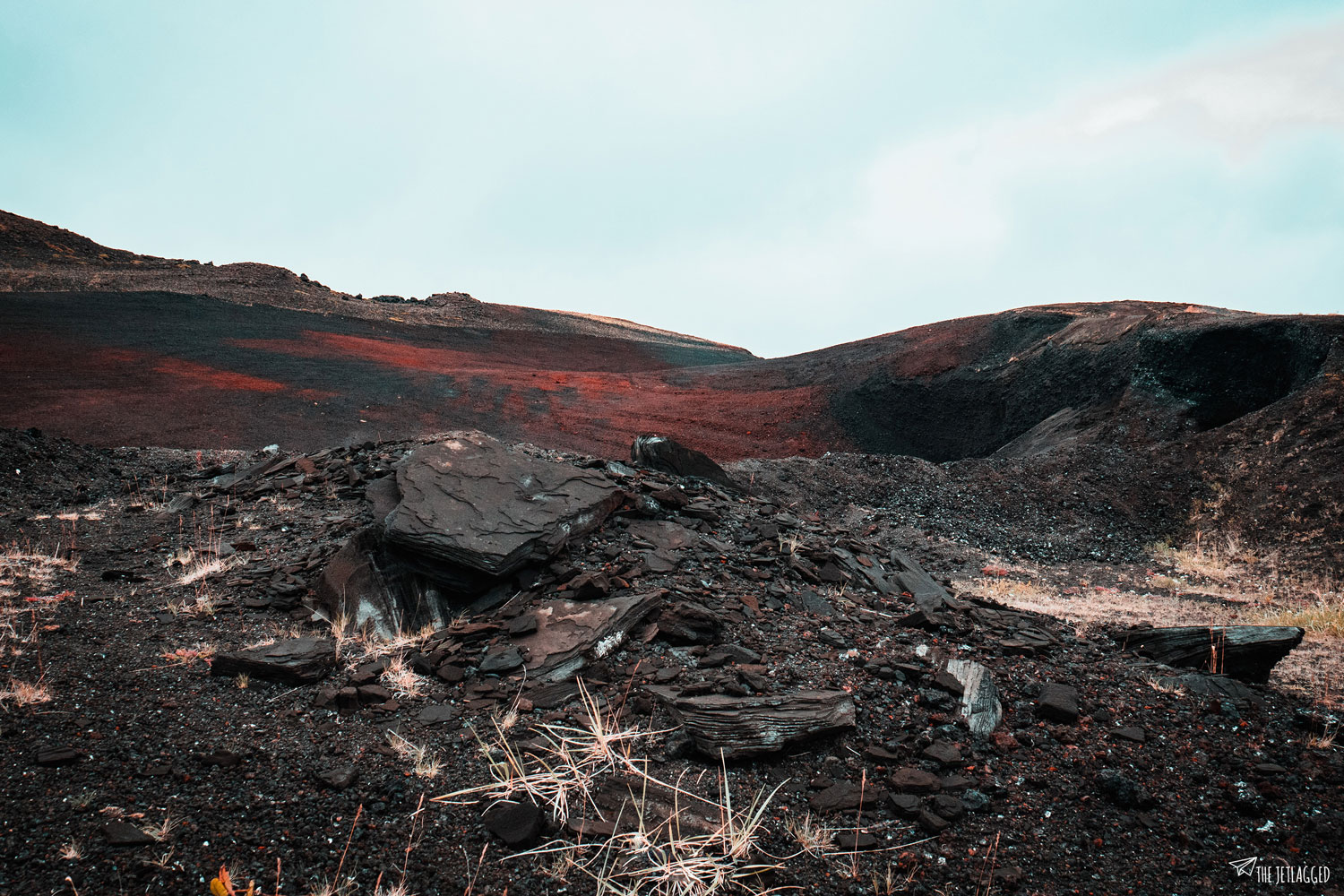 Flights from most European cities take approx. 4 hours before arriving in Keflavik, Iceland’s airport, which lies on the south-western tip of the island. It is about a one hour drive away from the capital Reykjavik. A trip to Iceland can be planned as anything between a long weekend getaway to a month-long exploration of the vast country. 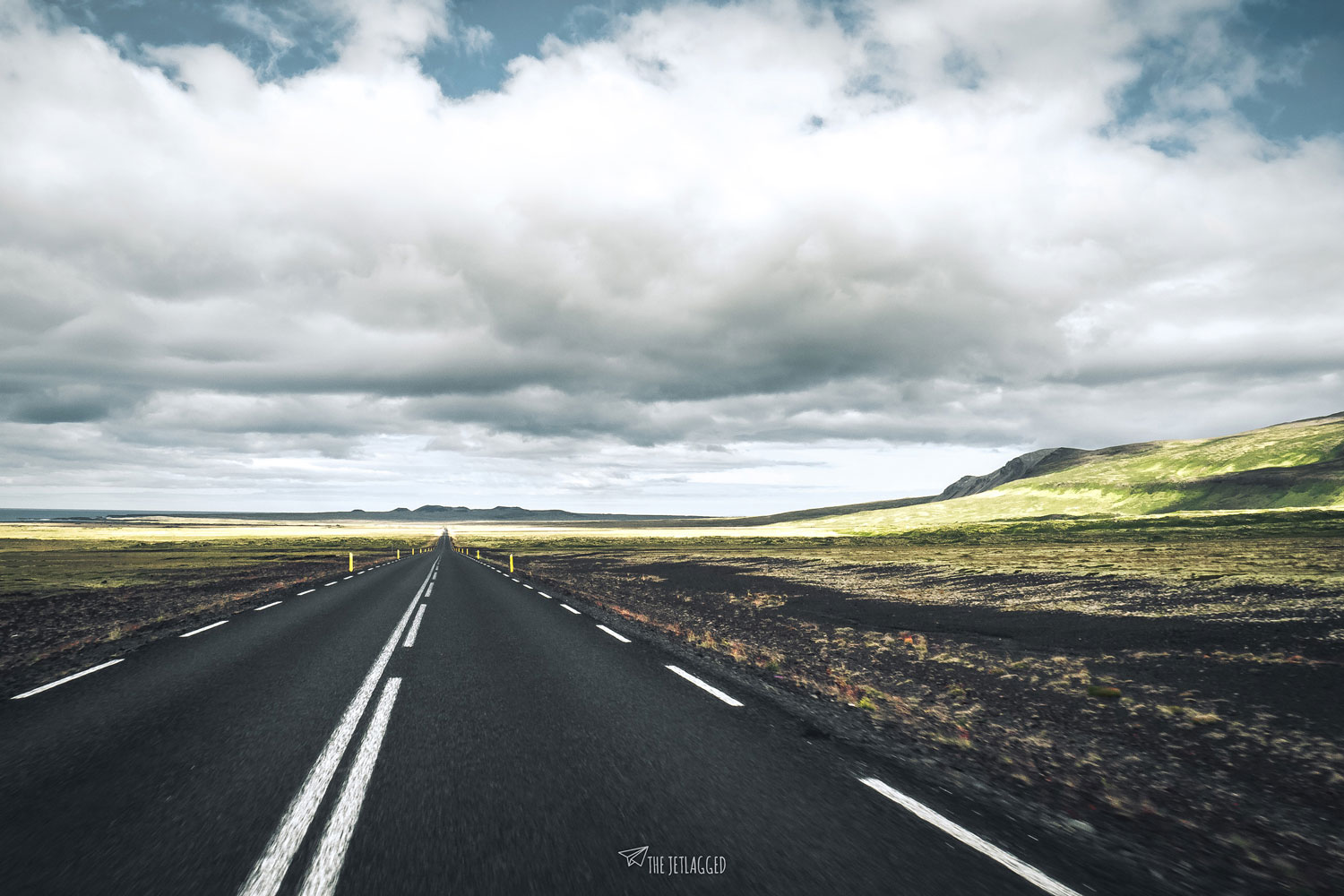 Divers who want to visit the dive site Strýtan, the hydrothermal chimney in the North, need to travel to Akureyri, Icelands second largest town. There are direct flights from Reykjavik, but flying there would mean missing one of the most spectacular road trips on our planet – and it is easy to rent a car right at the airport or in Reykjavik. Iceland’s major road, the Ring Road, runs all around the island and leads right through Akureyri. The short route from Reykjavik is about 400 km, which can be done in a day. Travelers with a bit more time should consider to take the long route (approx. 900 km) and make a couple of stops overnight. 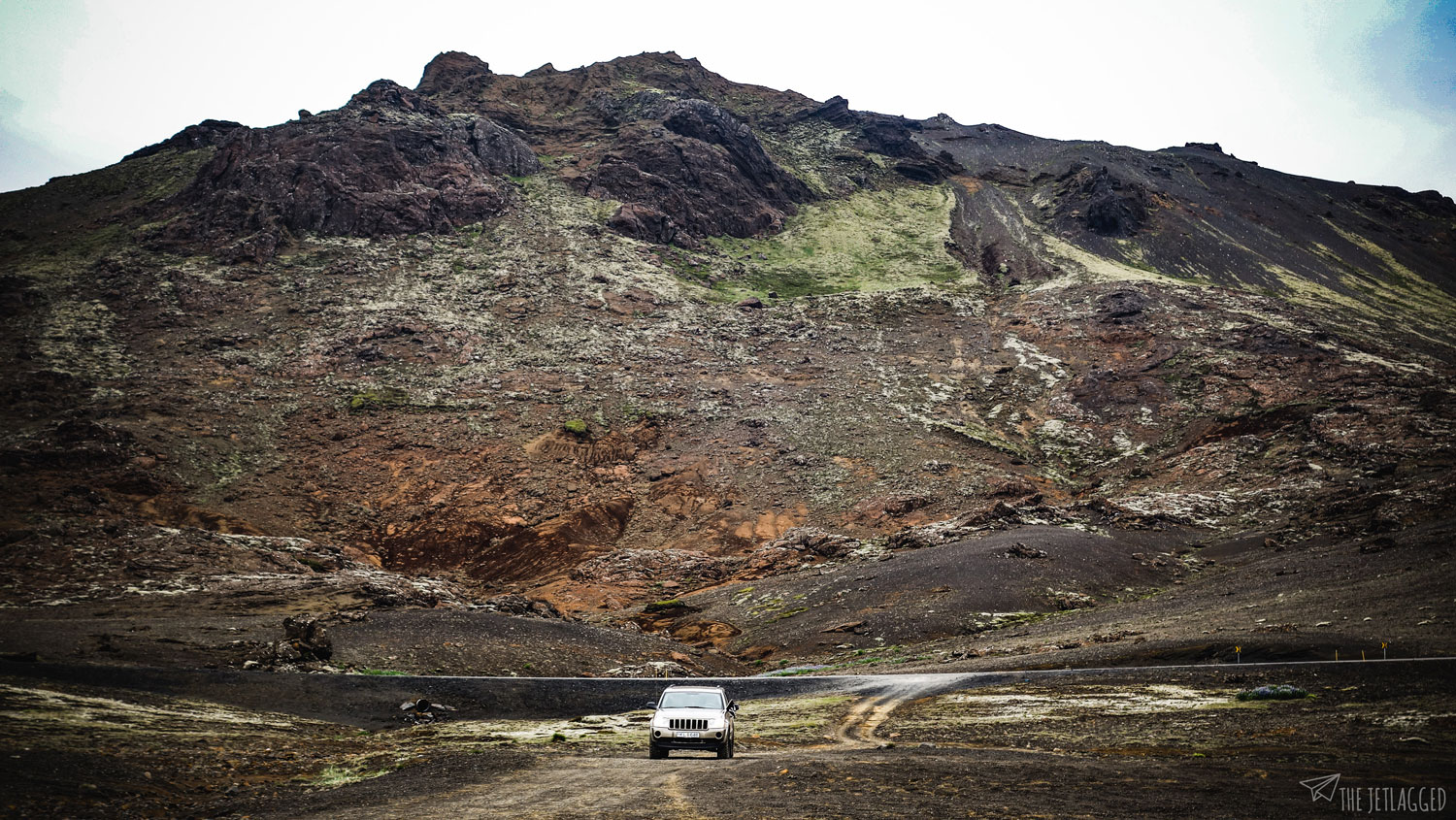 Some of the most impressive landscapes and popular tourist sights in Iceland are easily accessible from the Ring Road, for example the Seljalandsfoss and Skógafoss waterfalls, Jökulsárlón glacier lagoon or the basalt columns and black sand beaches of Vík. All over the island, there are numerous geothermally active areas with steaming hills, hot springs, bubbling and stinking mud pools and geysirs - where the forces of nature at work can be experienced from a safe distance. 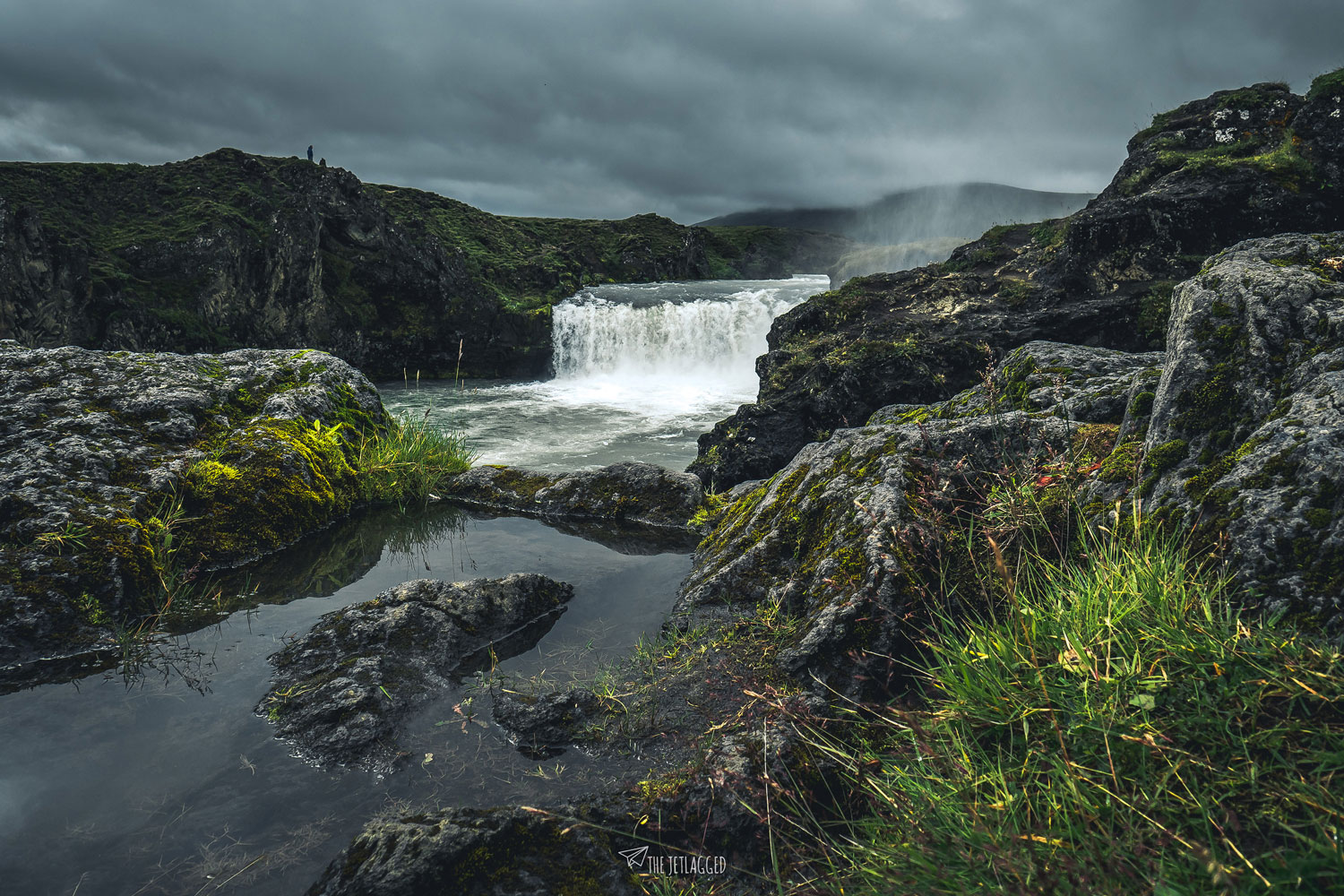 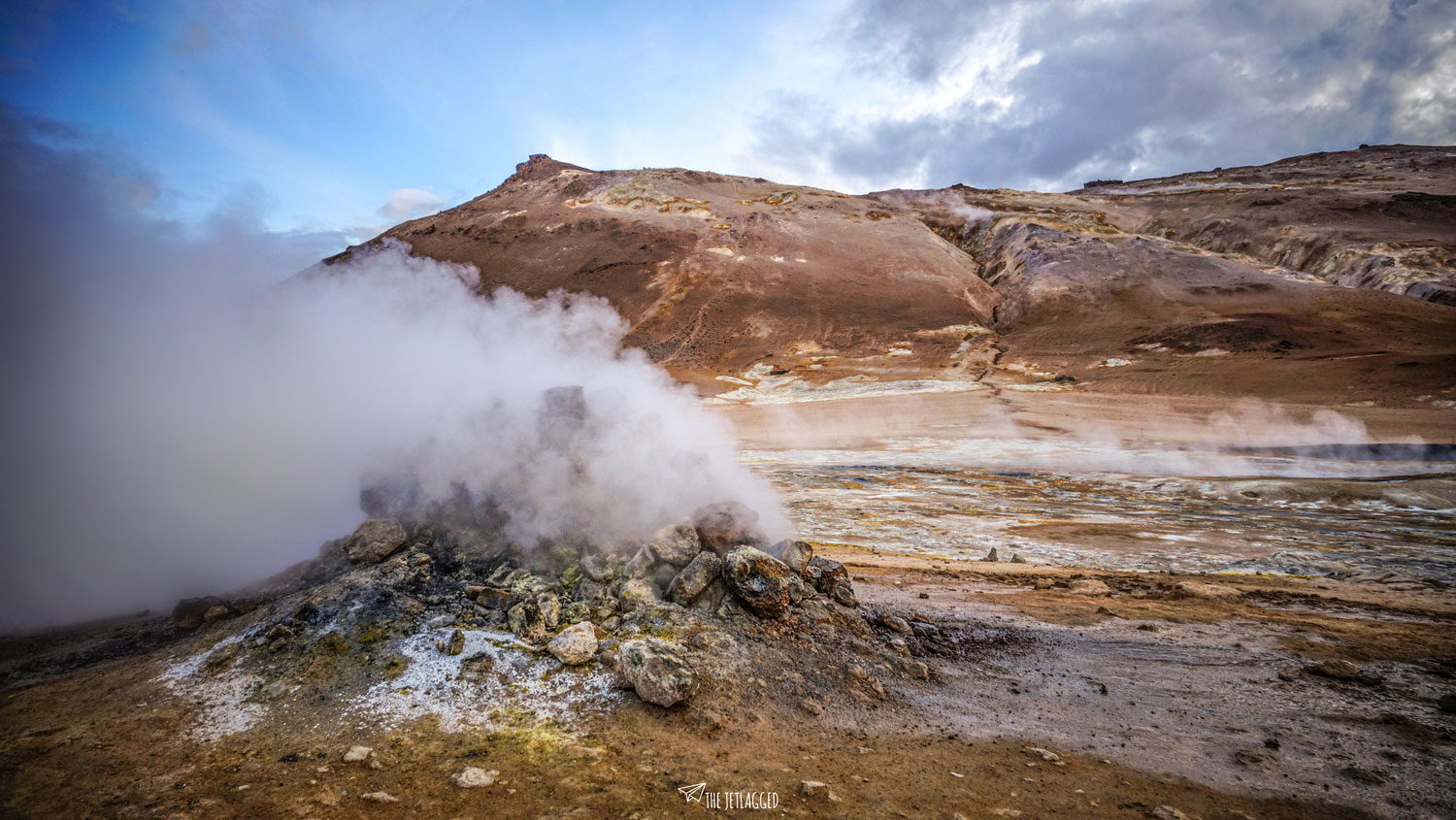 Akureyri is only 50 km south of the Polar Circle. A bit outside of town on the western shore of the Eyjafjörður, a fjord in the Arctic Ocean, lies a settlement called Hjalteyri with an old, repurposed fish factory - the home of the Strýtan Dive Centre. Its owner, Erlendur Bogason, is a real Icelandic diving legend and runs the dive centre with his daughter Sævör. He is also the one who discovered and first explored the hydrothermal areas Strýtan and Arnarnesstrýtur. 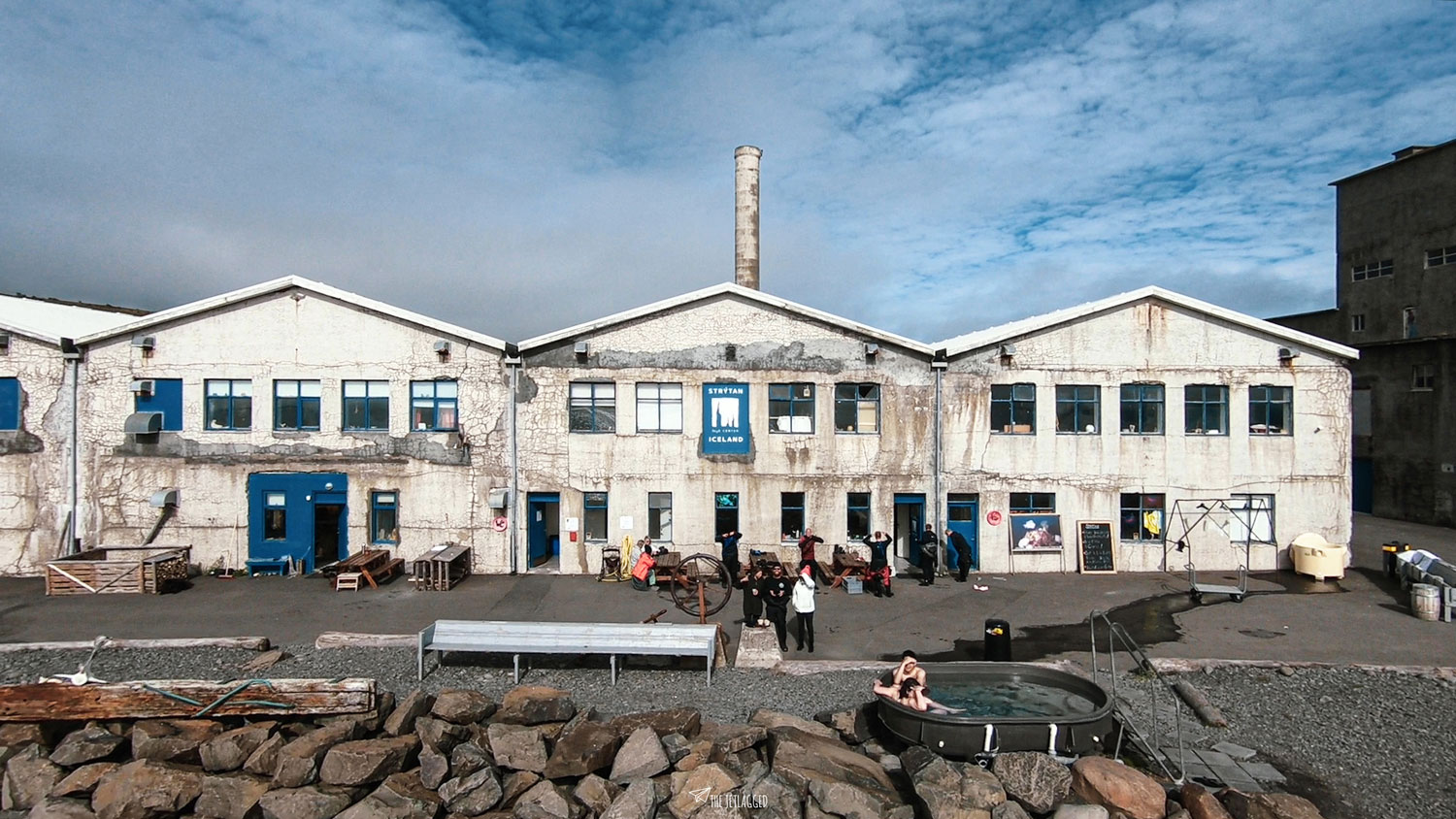 Right in the middle of Eyjafjörður, in a depth of about 70 meters, the geological activity has created a hot spring which has been releasing freshwater heated by the shallow magma underneath into the ocean. High concentrations of dissolved minerals in the water crystallize as soon as they come into contact with the cold sea water. This process has created a single limestone chimney, that rises like a massive tower from 70 m to 15 m beneath the surface, the Strýtan. Scientists estimate that is has taken more than 10.000 years - since the last ice age, for this hydrothermal vent to reach its present size. There are around 100 l of 72° C warm freshwater coming from the chimney every second. Some areas, including the tip of the chimney are still actively building up. 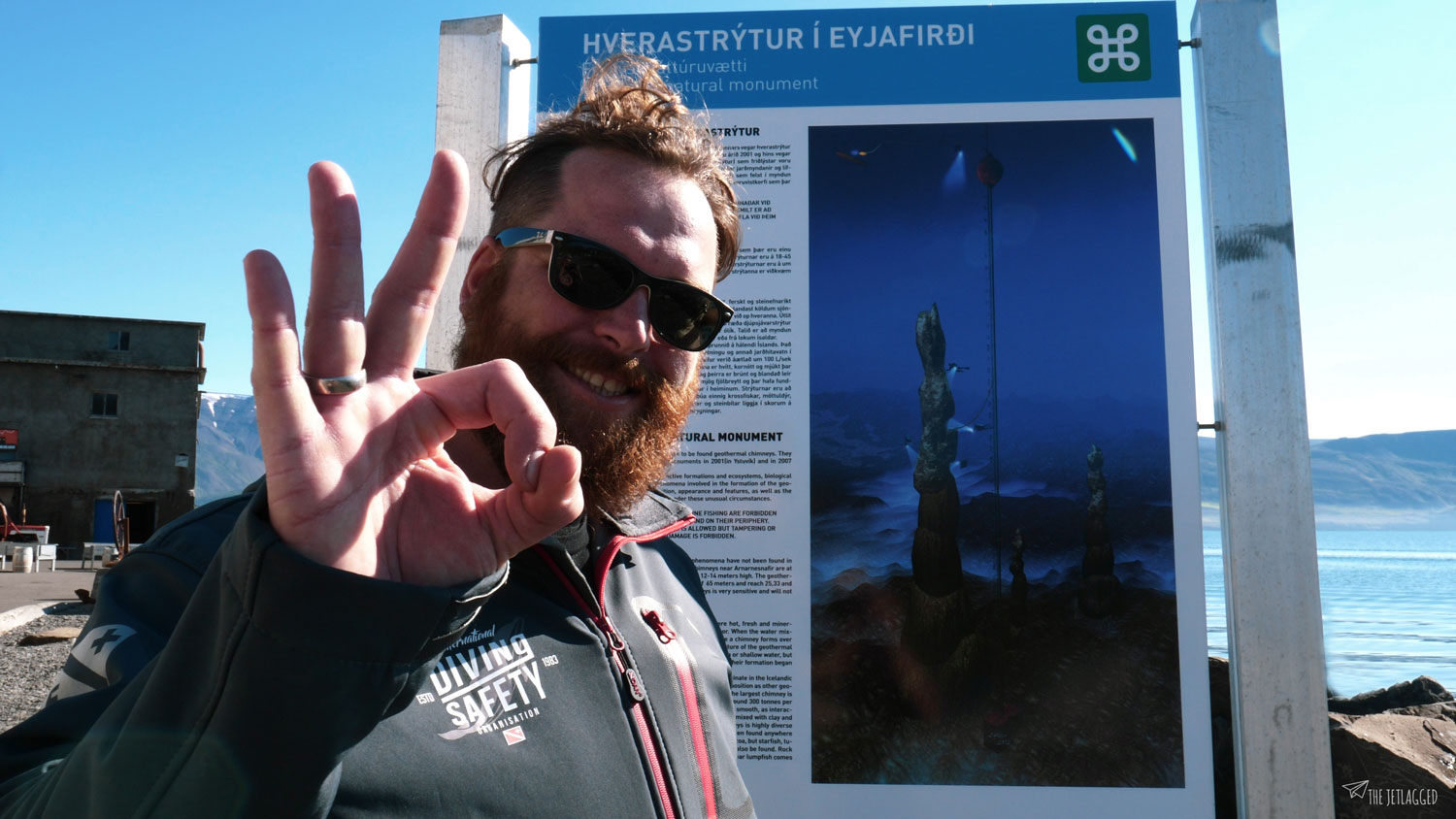 Since 2001, the hydrothermal sites in the Eyjafjörður are the first underwater protected areas in Iceland and Strýtan Dive Centre is their official protector. Diving in this area without permission from Strýtan and Erlendur Bogason is not allowed. Each dive will be guided by Erlendur himself, his daughter Sævör or dive guides who were trained by him.

Divers check in at the dive center, where you can also get high quality, well serviced rental equipment if needed. Before getting ready, Erlendur gives his guests a tour through his little museum upstairs and tells you about the unique nature and geological history of the dive sites and the marine life you might encounter.

You kit up and get fully equipped in the dive shop. From there, it is a short walk to the little harbour of Hjalteyri, where the divers get into a RIB.

Most divers come to Strýtan Dive Center for a minimum of two dives. Usually, Erlendur will go for a „check dive“ at Arnarnesstrýtur first before driving out to the large chimney. The site is also called „Little Strýtan“ and will give you the opportunity to acclimatize to the conditions in the cold Arctic Ocean and also check that all the equipment is working properly. Arnarnesstrýtur has a cluster of smaller hydrothermal chimneys rising from the bottom at 23 m up to 15 m, with 79°C warm freshwater gushing from them. The area is not only an extremely rare geological phenomenon but also has a plentiful and diverse marine life to encounter. Numerous species of nudibranchs, crabs and other macro life live on algae and seaweed covering the chimneys. Atlantic wolffish inhabit many cracks around the hydrothermal hill and a lot of other species of fish, like cod, flounders and lumpfish can be seen here regularly. 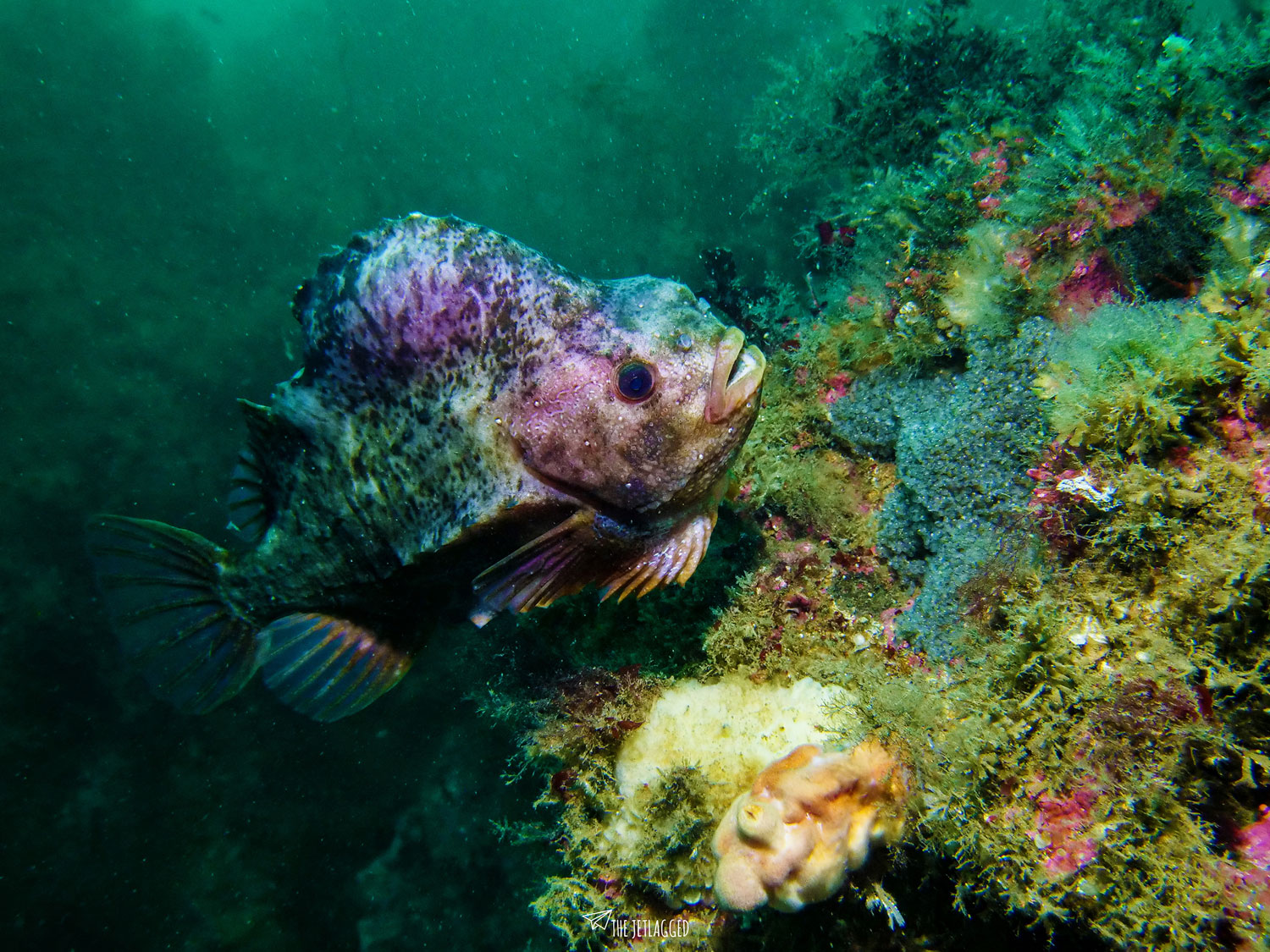 The next dive will take you to the main attraction, the large Strýtan, which is only a 10 minutes zodiac ride away from the dive centre. On site, the divers descend on a permanent buoy line to approx. 30 m and from there, cross over to the chimney. Sometimes, on the way down, you may encounter a halocline, especially in the summer months, when meltwater from the snow flows into the fjord and sits on top of the colder salt water.

The first sight of Strýtan is absolutely extraordinary and unique - simply mind-blowing! Like a dark tower rising from the cold depths of the fjord it stands tall and solitary in the middle of the Arctic Ocean. It seems so completely otherworldly and alien, and yet is probably the most „Earth-ly“ phenomenon there is. Scientists believe that first live on Earth may have formed under conditions similar to those that can be found on Strýtan and other hydrothermal vents.

During the dive, the divers are slowly circling the chimney, which has a diameter of several meters a couple of times, coming up shallower with each round. You can see where the chimney is still building - warm water is rushing out of cracks and the mineral structures are still fresh. You can feel the heat of the water coming out of the hydrothermal vents, but it does not affect the overall temperature in the water, which is generally between 4 and 8°C. The visibility is usually around 10 m, sometimes more, sometimes less. You can get easily mesmerized and distracted by the shimmering activity of the vents, so make sure to always have an eye on your remaining bottom time. 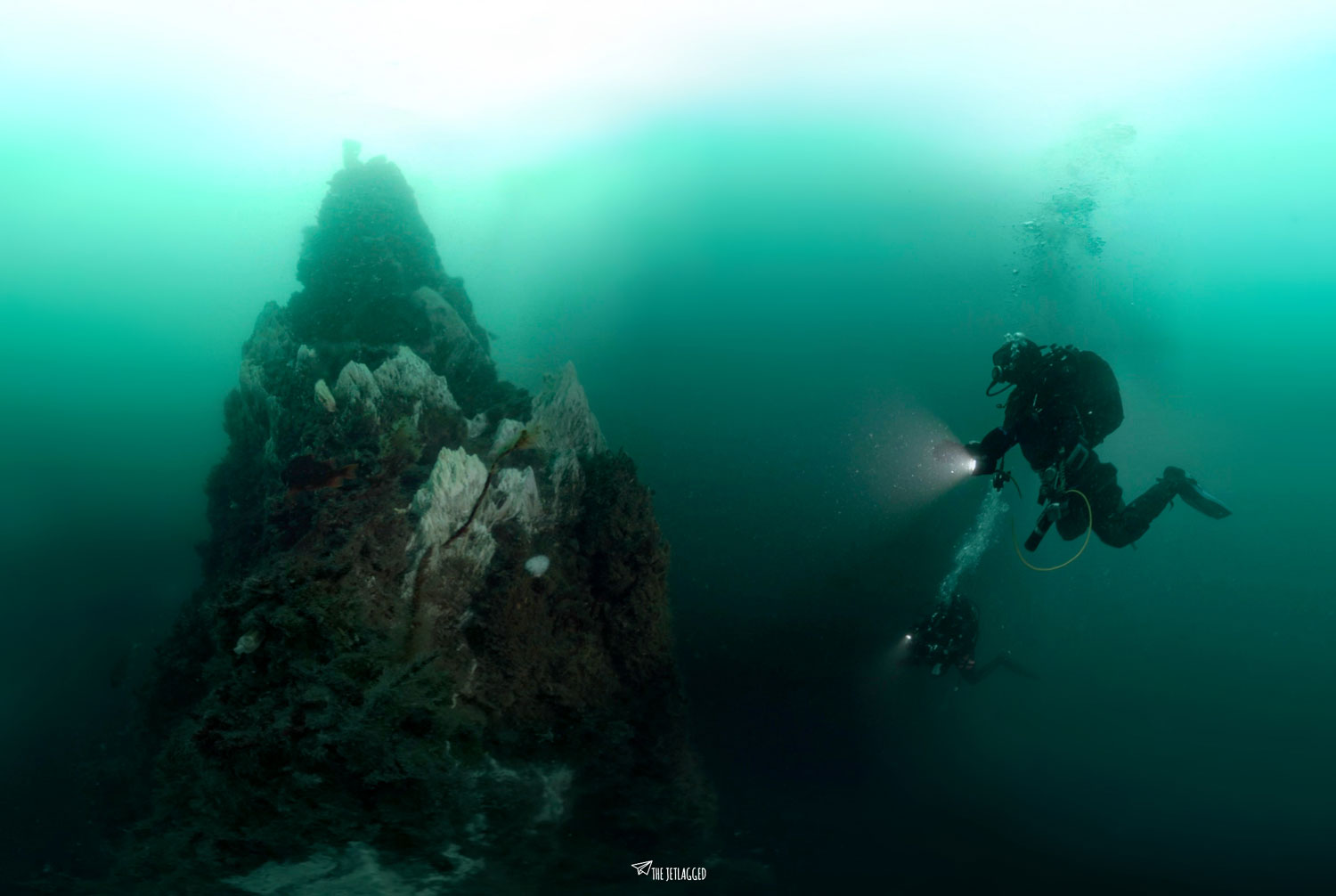 The chimney is the habitat of a unique flora and fauna that has developed and settled under these special, extreme circumstances. Algae, seaweed and kelp, and some pale anemones are growing on it. The hydrothermal vents attract lots of marine life and you might even see schools of cod swimming up and down along the chimney, or different kinds of jellyfish gracefully floating past.

After about half an hour circling Strýtan, you will reach the tip of the vent in about 15 m depth. It has a number of little chimneys that rise up like the white towers of an enchanted castle and are ejecting hot and shimmering water.

Here, if you still have enough bottom time and air in your tank, you can spend another couple of minutes, before moving over to the rope that leads back to the buoy and the boat. Because the top of the chimney is in 15 m depth, the safety stop has to be performed in mid-water. Good buoyancy skills are a must, but sometimes the sea is a bit choppy and there might be a current, so you can also hold onto the line as you slowly ascend.

Back at the boat, make sure to follow the proper boat diving procedures, hand up your weight belt/weight pockets first and lift your tank and BCD from below to help the staff in the boat. They will also assist you to get back in the RIB.

Note: This video was created using a special 360° camera setup with 6 individual cameras. Stitched together, they allow a unique perspective of the hydrothermal chimney like never before seen.

These dive sites are only recommended for advanced divers. Diving in the North of Iceland means you’re diving in the Arctic Ocean, which can be extremely challenging. The water is cold and the ocean surface is often choppy. Divers who decide to take a trip to this undoubtedly unique phenomenon need to be in very good control of their buoyancy in order to not come into contact with any of the fragile and slowly growing mineral structures. You also need to be physically fit since the currents can be quite strong sometimes.

After the dives, give it some time to desaturate, and then you can relax in a hot tub right outside the dive shop which is filled with geothermal water. While you warm up, you can enjoy the beautiful scenery with snow-covered mountains and the fjord where seals, porpoises and sometimes even humpback whales can be spotted.

Before taking the plunge make sure your DAN membership is still active. If it isn't, join DAN or renew your membership at www.daneurope.org.