Transporting diving lights and batteries on an airplane

To check or not to check - that is here the question

We all experience this from time to time when we fly: dangerous items, like knives or blades, have to be checked as hold luggage. It's for safety reasons regarding the other passengers or the crew members. It is to prevent hijacking or simply hurting someone.

So, how are we going to get our torches and diving lights to our diving destination?

You can still carry them on the plane but a good idea is to separate or disconnect batteries from the rest. Separating the parts may also enable you to carry bulbs and batteries as hand luggage which might even be “healthier” for the items itself when otherwise a bulb, for example, could be crushed.

Diving lights obviously belong to the inner circle of dangerous goods. Why, will be explained in the following: “Diving equipment: (…) Diving lights may contain rechargeable lead-acid batteries and high-intensity diving lights may generate large amounts of heat when illuminated. Therefore, the batteries and bulbs shall be removed to insure safe carriage.” 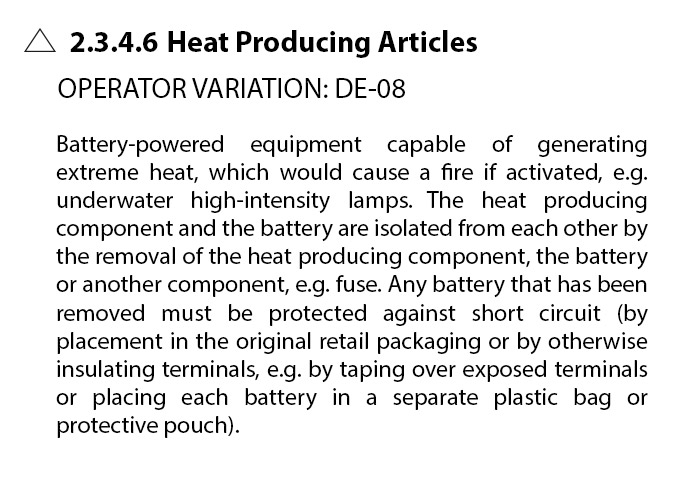 Especially tec divers carry multiple backup lights including batteries and are therefore heavy loaded with some potentially very hot stuff and would most likely override any existing hand luggage weight specifications of an airline. They would have to check most of their lights as hold luggage.

While we are at it, we will also talk about lithium ion batteries for which a special Transportation Policy exists. If passengers or crew members bring, for example, portable electronic (medical) devices containing lithium metal or lithium ion battery cells or batteries for medical use, they must comply with the transportation and packaging requirements specified in the Technical Instructions of the International Civil Aviation Organization (ICAO) and get the approval of the airline.

The ICAO is a specialized agency of the United Nations. According to its Technical Instructions for the Safe Transport of Dangerous Goods by Air, passengers or crew members can bring their personal-use portable electronic devices containing lithium or lithium ion battery cells (in watches, calculators, cameras, mobile phones, laptops, video cameras, etc.) as carry-on baggage on board the plane as long as the lithium content in the battery does not exceed 2g and its rating does not exceed 100Wh. Lithium batteries beyond 160Wh are prohibited in both carry-on and checked baggage while lithium ion batteries between 100Wh and 160Wh may be installed on devices packed in checked or carry-on baggage when approved by the airline. However, per passenger or crew member only two airline-approved spare batteries with a rating of 100Wh to 160Wh are allowed.

Spare batteries should be wrapped individually in an insulating packaging, separate plastic bag or box or contacts (i.e. electrodes) should be covered with adhesive tape to prevent short circuits and may only be transported in carry-on baggage.

As you can see, battery is not like battery and technical devices are also not always the same. In any case, it is always a good idea to refer to your local airline well in advance and prior to your flight, so you won’t run into unpleasant surprises at the airport. Furthermore, get this kind of airline information also from your vacation country - so you can safely bring your stuff back home without burning up the airplane and earning fierce looks from the other passengers.