The Sea: the greatest amusement park of planet Earth

Have you ever imagined an alternate world, where you can fly between mountain peaks, do somersaults with strange creatures, without ever falling? A world full of dreamlike beings, where you feel weightless, but you don't need a spaceship to get there? Well, that world really exists, and it's much closer than a weird planet in a faraway universe; that world is the Sea: the greatest amusement park of planet Earth.

In the past, men who went underwater were looking for things to bring up to the surface. They looked for sponges, oysters, they looked for corals... and treasures in the holds of sunken ships. Then they realized that the most precious resource of the Sea was right there, all around them; it was there for them to look at, to explore, and not to take away with them. They discovered that real wealth was just being down there, in the company of dreamlike creatures like dolphins, seals, turtles. In that kingdom where whales do not swallow any Pinocchio, and Nemo and its family members stay quietly in their homes, the anemones, and never venture too far.

If you are curious and you have a certain passion for History, or for antiques, know that just about anything has ended up on the bottom of the Sea: airplanes, tanks, motorcycles, cars, helicopters. And obviously loads of ships, each one with its cargo, and its history.

Other things, instead, were sunk on purpose. In many places the governments have sunk huge ships. They have sunk them, after removing any pollutant, to offer new attractions to divers, meanwhile creating new habitats for fish, corals, and a great variety of sea creatures.

Other objects were placed on the seabed for scientific purposes. Some look like real spaceships. One of these spacecrafts lays on a beautiful sand patch at a depth of twenty meters in Florida; it is called Aquarius and it is a permanent underwater laboratory of NOAA, the American agency that studies the Earth's atmosphere and the oceans. And they created it, lo and behold, in agreement with NASA, the American space agency. From that underwater base, scientists and researchers can study the marine environment, and NASA can put to the test its astronauts and equipment with endurance tests in an extreme environment. After all we said it before, being underwater is like going to space, or is it not?

Another laboratory is in the Red Sea, off the coast of Sudan. Well: that one really looks like a flying saucer. It is called Precontinent, and nowadays it is an abandoned metal dome. It was placed there by a French man, who for sure you've heard about from your diving fellows: a guy named Jacques Cousteau. 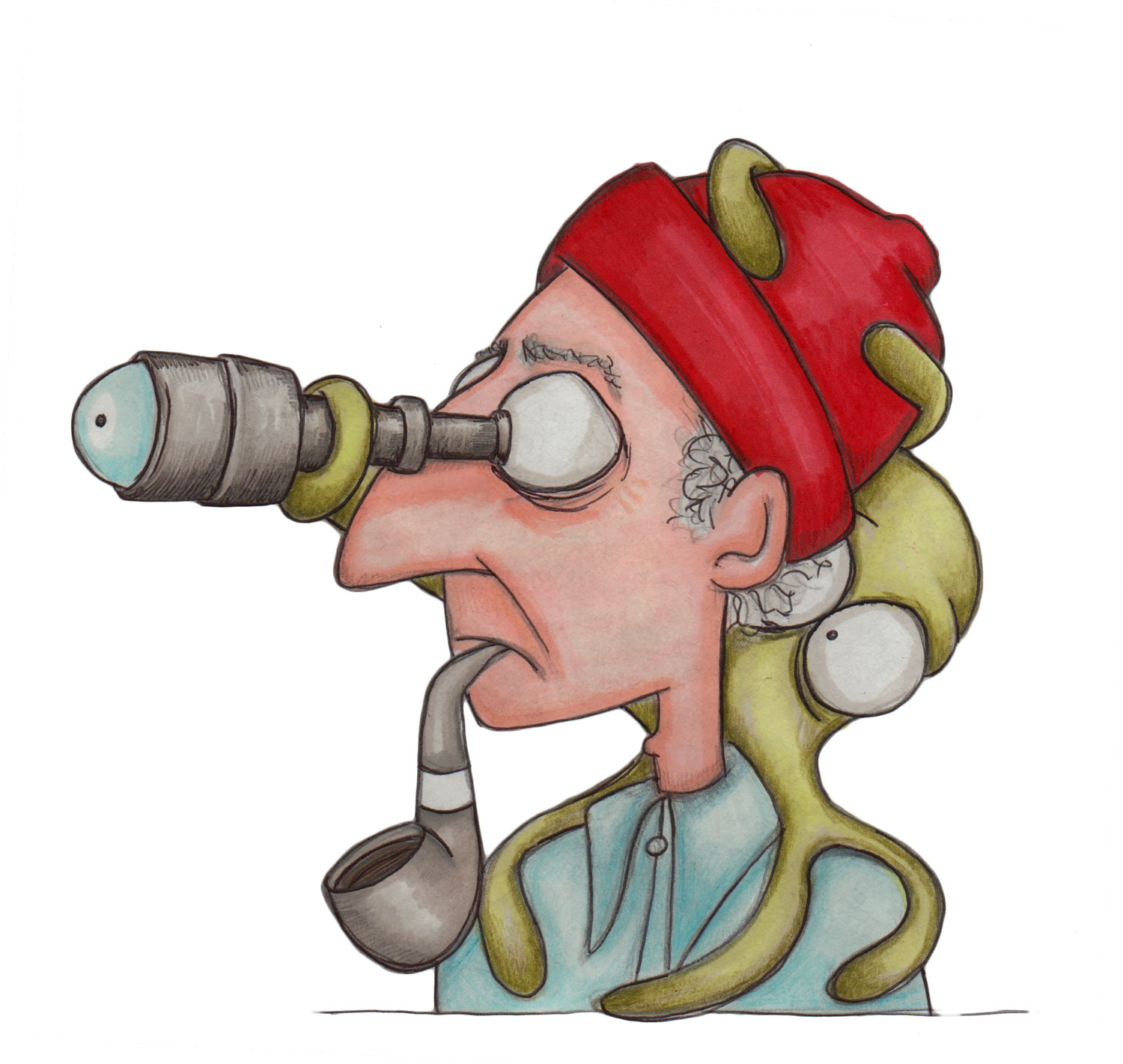 Mister Cousteau, even if it would be more appropriate to call him Captain Cousteau, was a great seafarer with a big nose and a red woolen beret; he was a researcher who explored all of the oceans, measuring currents, observing and counting marine species, shooting numerous movies and documentaries, but above all he invented certain pieces of equipment and improved others that today are of common use, so common that anyone can make use of them, making the depths of the sea maybe less mysterious than in the past, but definitely more accessible. Nowadays, anyone who is at least eight years of age can dive, in shallow water and accompanied by an instructor, while for a first level certification you need to be only ten years of age. The relationship with the Sea is an important one, from which both the future of our planet and thus our future as human beings, are dependent on. To get to know the Sea from within can help us save it, and take care of the dreamlike creatures that inhabit it. And now that you're starting to understand why your diving fellows go through the trouble of loading their car with strange-looking equipment, you will be wondering what is the purpose of all those things they carry with them, and why they are so essential. Basically, they are needed to save the money for space travel.

How do we dive?

Divers move in an environment that is different from the one for which human beings were designed. To be able to do so, they have gathered specific knowledge, enhanced technologies, and developed new techniques, increasingly easier and safer. It has been a long adjustment process to the aquatic environment, where many rules change. Some, like the absence of weight, change in our favor. 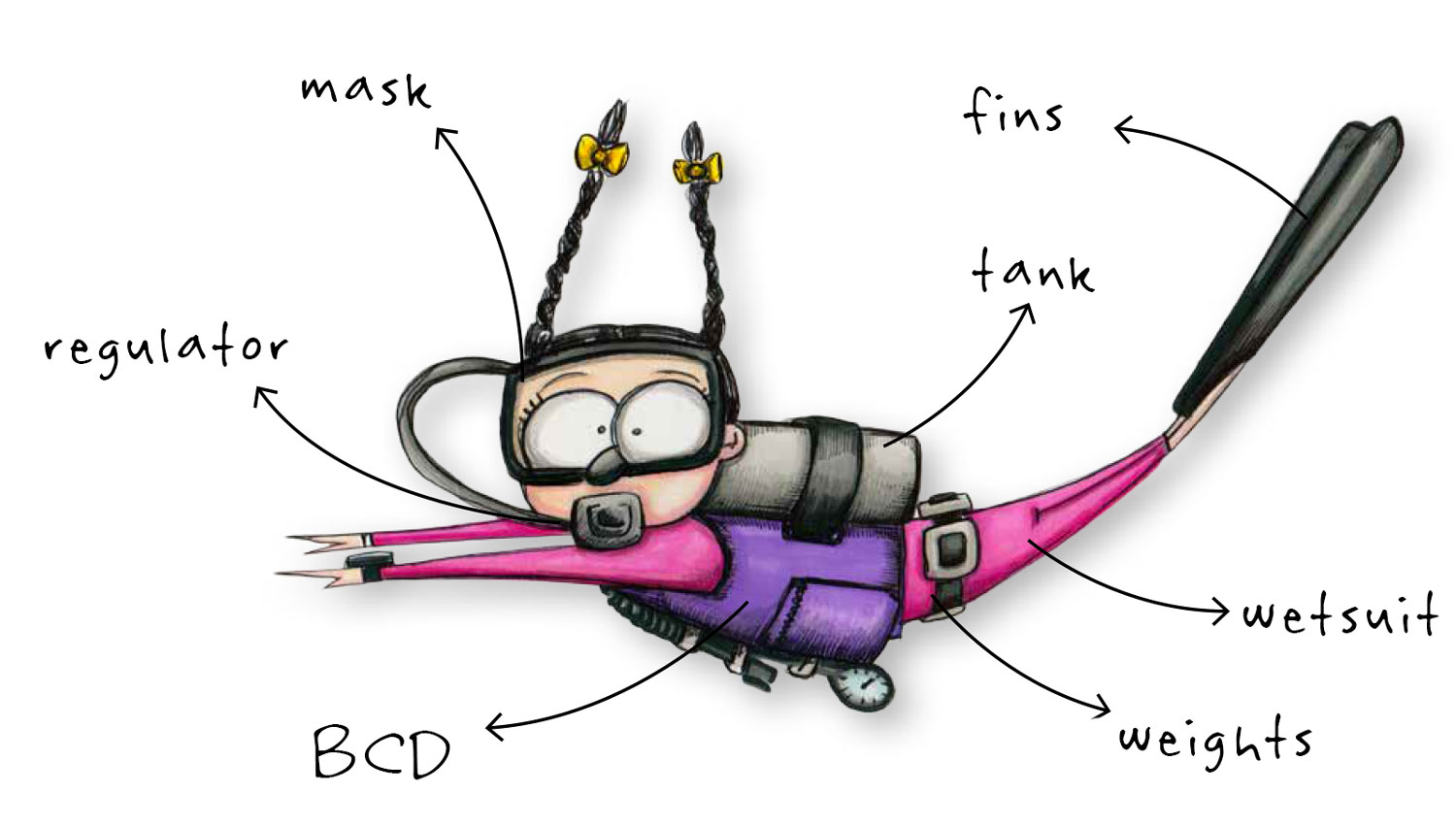 Seeing – Underwater, providing that you can keep your eyes open, vision is really foggy, all we see are big spots. This is because our eyes are made to focus in contact with air. The purpose of a mask, the most familiar object for diving, is to allow us to see, placing air, and a piece of glass of course, between our eyes and the water. Diving masks must include the nose; other masks are suited only for swimming on the surface.

Swimming - I bet that you also know what fins are and what they are used for. How do they work? Increasing the surface of the foot, they allow us to have greater propulsion while swimming, both on the surface and when diving, making our diving experience more comfortable and less strenuous.

Breathing - To be able to breathe underwater like fish, we would have to have gills, but to grow gills we would have to wait a few million years, so we're better off using the famous regulator. If instead you want to dive holding your breath, imitating dolphins, seals, whales, and turtles, there are free diving schools. Free divers, to examine the seabed while on the surface, use a snorkel. The snorkel allows us to breathe while our mask is immersed in water, so that we can keep seeing what is under the surface. The regulator is a precision device that allows breathing underwater for those who don't have gills. It is connected to a tank, which usually divers carry on their back, and it will supply all the air you need. You will hear talk of helium and oxygen. Those gases are used only by tech divers or those who work at great depths. If you go underwater, with your mom, your dad, or your auntie diver, rest assured that you will breathe air, nothing more than air, clean and filtered. 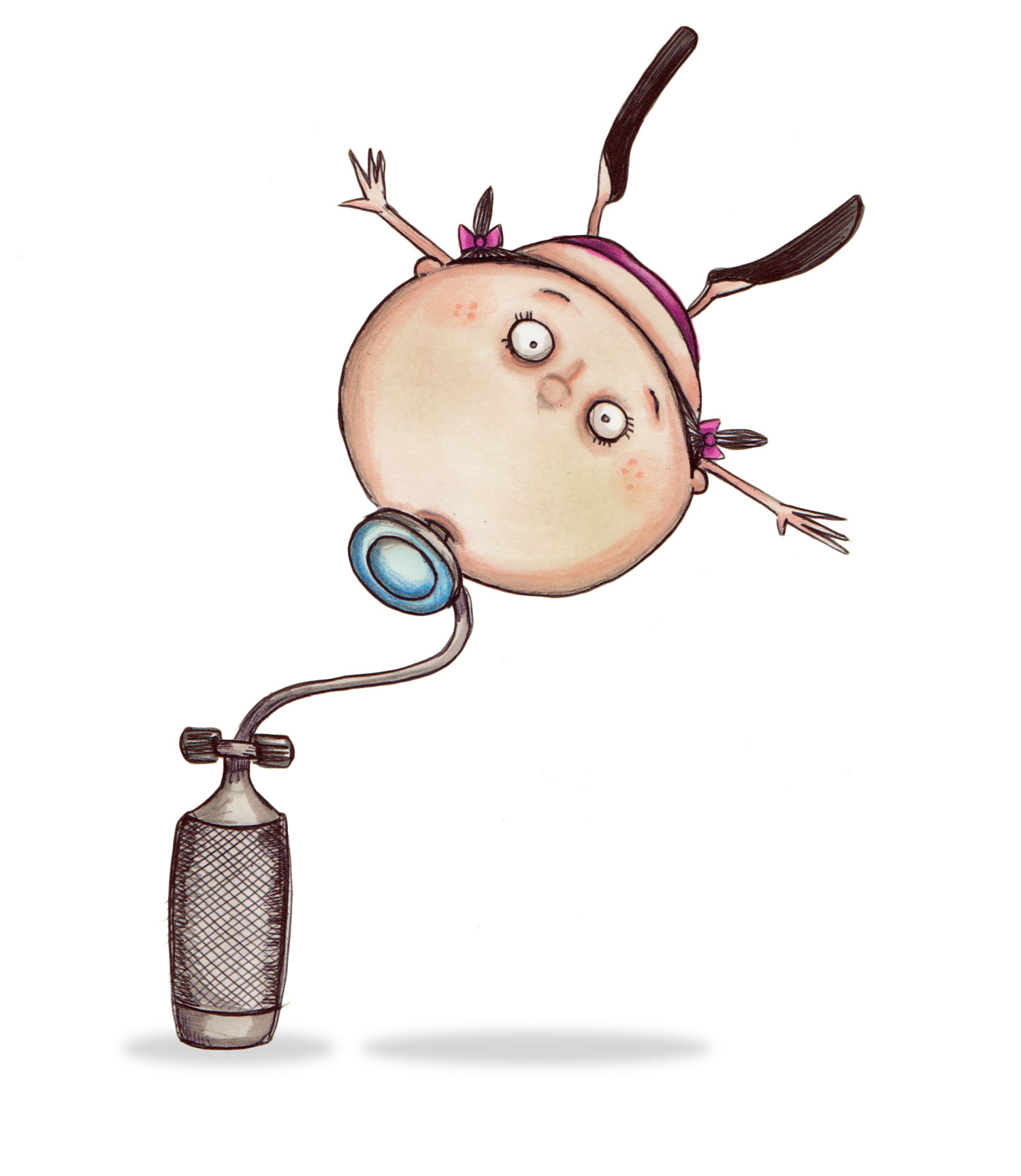 Cold or hot – In the water, even if it seems just a little bit chilly, we lose heat very fast. This is because water transmits heat much faster than air. This is the reason why divers wear a wetsuit. Sometimes it is tight-fitting like a second skin, in other cases it is big and saggy, and makes divers look like astronauts or medieval knights. A dry suit, which means it doesn't let water in, is used in very cold waters, and a wetsuit, which lets a bit of water in, is used in temperate waters. In warm, tropical waters, divers go down in a bathing suit, or at most with very light garments that protect them from sunburns. 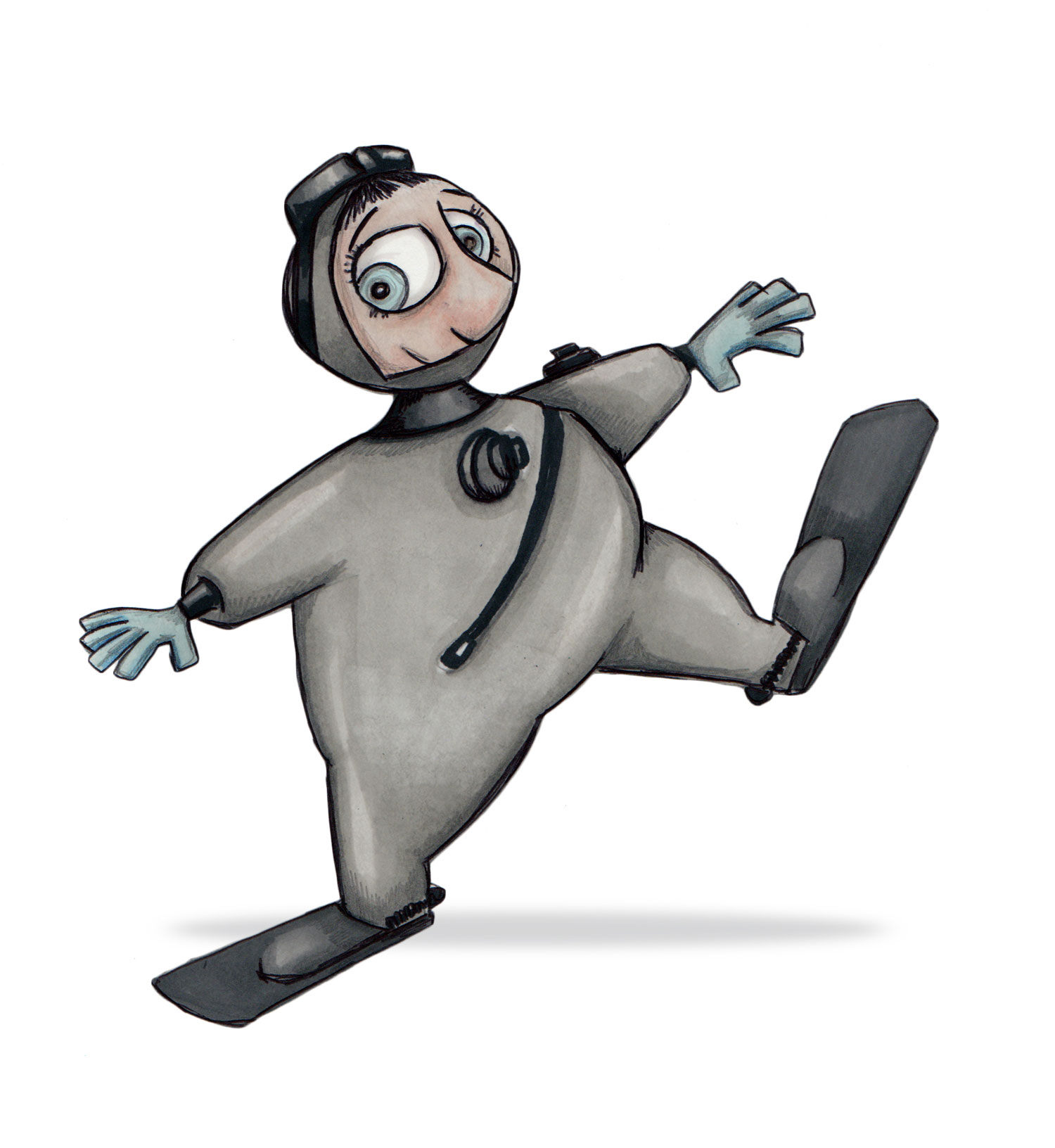 Fish, in order to control their depth, have a swim bladder, that they can expand or compress as needed. This is how they change their volume, and based on what they decide, they go up or down... or else they float, without going up or down, swimming effortlessly. We, on the other hand, resort to technology and we use a BCD (Buoyancy Control Device), a sort of life jacket to which we usually fasten the tank. By adjusting the air in the BCD, we can float on the surface with our head above water, or go down and lay on the bottom. If adjusted properly, the BCD allow us to swim effortlessly, without going up or sinking.

What are weights for?

I'm sure that you've already given a puzzled, not to say worried, look to that belt full of lead that divers use. The fact is, wearing all that stuff, mask, fins, BCD... but especially a wetsuit, almost everything tends to float; a diver would stay on the surface like a big insect, or a piece of cork, while the goal of a diver is to go down! So, as counterbalance, divers need to wear those ugly lead weights.

How does one feel underwater?

Well, we feel extremely well, like astronauts. There's a beautiful silence all around. If you use a regulator, you only hear your own breath when you inhale, and the gurgling sound of the bubbles as you exhale; and if you are free diving, you only hear the sound of a few bubbles escaping from your mask or snorkel. While we are starting to go down, though, we must adjust the internal pressure to our ears and mask. Water is much heavier than air, so that strange sensation you feel in your ears when you go down a mountain or while you land in an airline carrier, is felt already from the first centimeters of depth. And the pressure, that in the water rises fast, is felt especially in the mask and in our ears. The technique that balances our body with the outside pressure is called equalisation. There are a lot of ways to equalise, such as swallowing, or pinching your nose and blowing air, many techniques that any certified instructor will be able to show you, and help you practice. After doing this, you can fly about, being careful not to go up and down too fast, and not to disturb marine life. The maximum level of comfort, for our ears and our health in general, is reached staying at the same depth, or going up and down very slowly.

To go underwater we need to follow some rules. They are easy rules that anyone can understand and follow, but to know them well and to make sure we have not only understood them, but we're also able to put them into practice, we need to take a course. It is not wise to learn to dive by ourselves, or to learn from people who have not been trained to teach diving.

Experience is important, but diving instructors were taught something special: they were taught how to teach, and especially, how to take care of those who are learning to dive, of their well-being and their safety.

This text is part of the publication How deep is the sea (Com'è profondo il mare), included in the Collana del FARO series, published by Istituto per l'Ambiente e l'Educazione Scholè Futuro Onlus, in collaboration with il Pianeta Azzurro and DAN Europe, for Scuola d'aMare project. This series includes straight-forward texts, of easy reference and use on important environmental and social subject matters.