What can we learn about the risk of decompression sickness (DCS) by examining actual dive profiles and their outcomes?

Actually, quite a lot. That was the primary reason that a prescient DAN Europe began compiling a database of recreational and technical dive profiles uploaded from dive computers, starting in 1994, and have continued to improve both the software, and accumulate profiles along with associated background information. Call it the diving community’s homage to Big Data!

The goal of the study was threefold; First, to get an accurate picture of the actual diving practices of European recreational divers and how they compare to recommended practices. Second, to investigate additional non-pressure related risk factors such as body type, age, gender, workload and environmental conditions, and their impact on potential bubble formation in divers.

Note that in nearly 1000 of the approximate 40,000 dives, DAN field researchers measured divers for bubbles after surfacing using a precordial Doppler recording; about half were measured ever 15 minutes for 90 minutes, the rest were measured 30 minutes post-dive. Finally, researchers planned to analyze the 320 dives that resulted in DCS symptoms and identify any associated risk factors, which could provide insights into improving existing decompression guidelines. 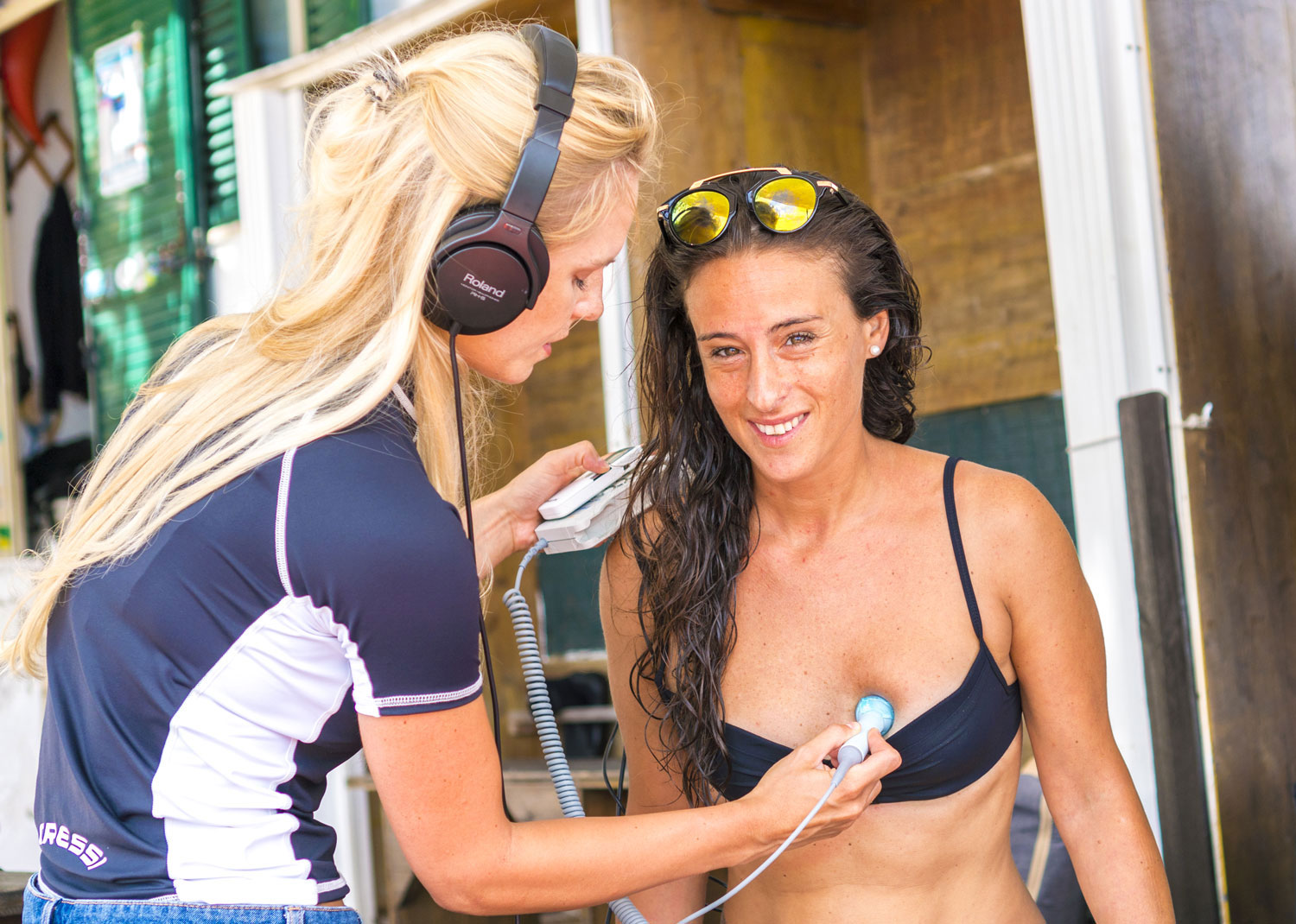 As the popularity of scuba diving grows, so do the number of dives conducted each year and with them, a corresponding number of DCS cases. Though the number of exposed divers and the exact incidence of DCS is unknown, its occurrence is relatively rare, with rates ranging from 0.01–0.1% per dive; the higher end reflecting rates for commercial diving and the lower rates for technical, scientific, and recreational diving. Even so, the consequences can be dramatic.

Although, the exact pathogenic mechanism behind DCS is still open to debate[1] there is widespread agreement that tiny circulating inert gas bubbles, called vascular gas emboli (VGE), are the principal culprit. Researchers also accept the fact that divers can have “silent” VGE, as measured by a Doppler monitor, without any DCS symptoms.

The current rules that govern the correct decompression procedures based on the hyperbaric exposure and the breathing gases used, are also well known and widely accepted, and therein lies the conundrum. The majority of cases of DCS are “unexpected,” meaning that they were not predicted by the current algorithms, and consequently considered ‘undeserved,’ i.e. divers got ‘bent’ though they correctly followed their tables or computers.

“The problem is that today’s decompression models are just considering saturation and desaturation of inert gas, and disregard the population of bubble micronuclei, the precursors of VGE, which we believe are primarily responsible for decompression bubbles,” study co-author Professor Costantino Balestra, DAN Europe’s Vice President of Research & Education explained.

According to Balestra, new research suggests that an individual’s metabolic processes interacting with micronuclei may modulate the formation of VGE making a diver’s individual susceptibility and recent history such as life style, exercise and other predisposing and humoral risk factors all the more important in predicting the onset of DCS. “We are always trying to explain the why,” Balestra said. 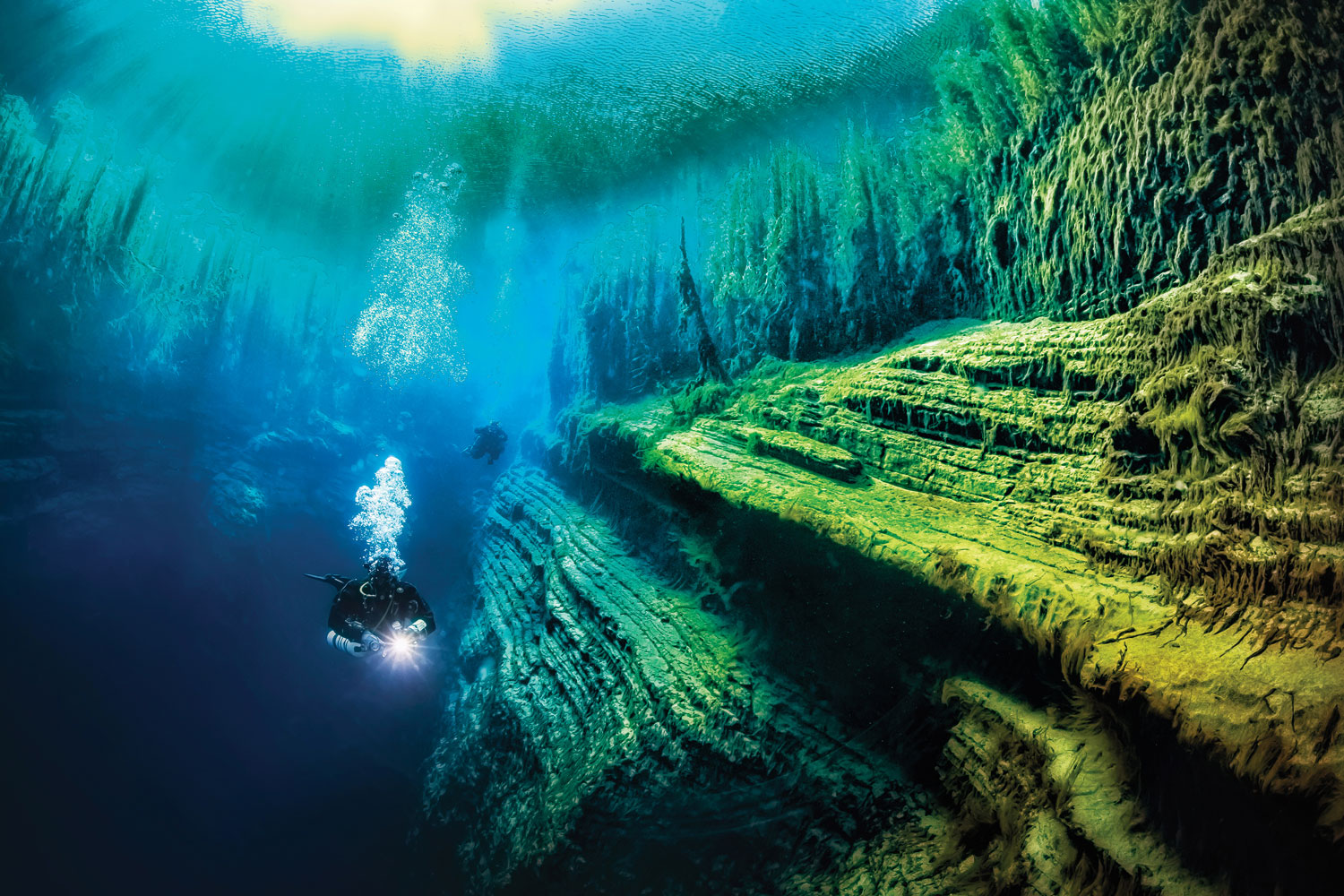 The divers recorded 39,099 open circuit dives with air (37,261 dives) or nitrox (1,838 dives) ranging in depth from five to 104 meters, over five years. Note that technical dives using trimix, and semi-closed and closed circuit rebreathers were excluded from the study. After converting the dive profiles, which included depth, diving times, the relative gradient factors (GF) used, and water temperature into the DAN’s DL7 database format, researchers were able to calculate several additional useful parameters.

First, they calculated the maximum gradient factor (GF) associated with each dive according to the Buhlmann ZHL16 C decompression model taking into account any repetitive dives. Gradient factors, which are commonly used with Buhlmann models to adjust for conservatism, are a way to measure nitrogen “supersaturation” in the “leading tissue” (the compartment with the highest supersaturation level) at any given time and depth during the ascent to the surface.

GF are presented as a fraction of the maximum inert gas supersaturation or M-value allowed for each of the 16 tissue types considered by the Buhlmann model, with saturation/desaturation half times ranging from 4 to 635 minutes. Researchers calculated GF for all 16 tissues compartments, and then recorded the maximum GF value for the leading tissue. Think of it as a measure of the conservatism of the underlying dive profile.

In addition, they were able to identify which tissue types were involved, after grouping them into three leading tissue group (LTG) categories; fast, medium, and slow in order to simplify calculations. Fast tissues include the lungs, blood and brain, while the slowest tissues are relatively poorly perfused such as ligaments and cartilage, and also poorly perfused fat, which has a high capacity for inert gas uptake. 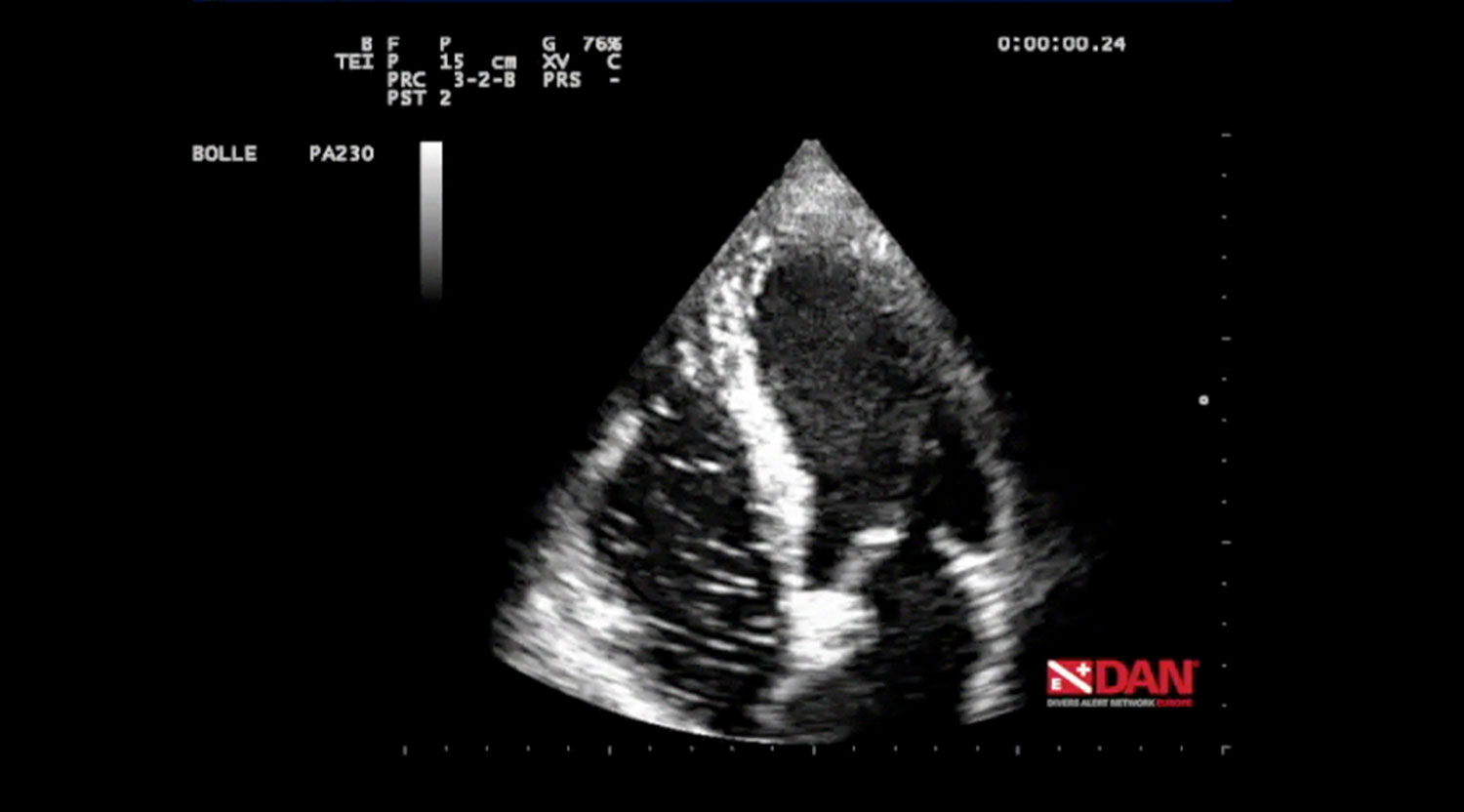 The DAN database (DAN DB) analysis showed that most of the recreational dives were made in the “safe” zone, with an average depth of 27.1 m, dive time 46.4 minutes and an average leading GF of 0.66, that is to say on average maximum tissue supersaturation was 66% of the maximum allowable limit. The average ascent rate was slower than the currently recommended rate of 9–10 m/min. Even more importantly, very few deco omissions occurred; this indicates that divers tend to dive conservatively.

The incidence of diver and equipment related problems, which was reported to occur in only 6.3% of the dives was also interesting. Fortunately, divers encountered serious problems in only a small fraction of the dives. For example, problems with breathing apparatus occurred only in 103 cases out of 39,099 dives, deco omission in just 20 dives and rapid ascent in only 109 dives. All together these problems accounted for less than 0.6% of all recorded dives.

The data also confirmed that bubbles peak between 30 and 45 min after surfacing. This finding is very important and confirms the importance of avoiding undue exertion during this post-dive time interval. In addition actions that can increase intrathoracic pressure, such as Valsalva maneuvers and physical efforts, during this period could negatively impact divers with Patent Foramen Ovale (PFOs). 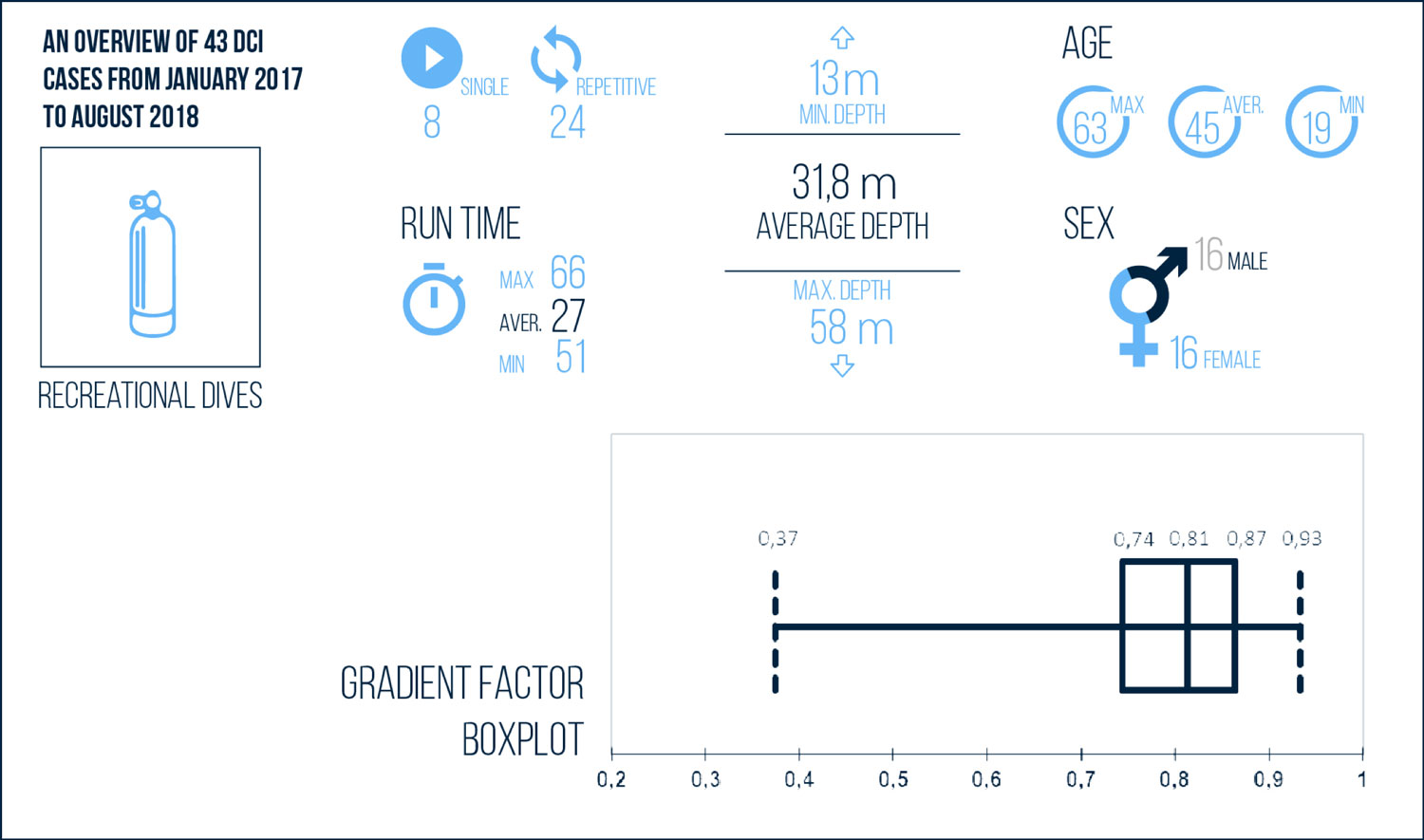 Interestingly, though height and weight did not appear to individually increase bubble formation, their combined value (BMI) appeared to be related higher bubble grades. An analysis of a diver’s fat mass, confirmed the connection with bubble formation, and the link was even stronger when considering actual DCS cases.

Though researchers were unable to find a significant relation between bubbles and non-dive profile related risk factors such current and low visibility or a high workload during the dive, they were able to infer that many of these risk factors likely resulted in stress in the divers. This led them to hypothesize that humoral factors (including hormones) released in a stress condition could possibly influence bubble formation. They are now investigating these possible variables in an in-depth follow-up study.

This may also explain why women are more subject to DCS though they exhibit little difference in bubble formation than their male counterparts on similar dives. Prior studies have noted that different phases of a women’s menstrual cycle have higher risk of DCS, while the use of oral contraceptive pill (OCP) appeared to reduce the risk.

Another intriguing finding is the effect of water visibility on bubbles and DCS. The data shows that high visibility increases bubble formation (by an increase of depth, time, and GF facilitated by good diving conditions) but DCS prevalence is higher in low visibility water. This seems to indicate that even in the presence of lower bubble grades, the stress effect induced by low visibility, may increase deco-stress and bubble susceptibility.

Researchers also noted that, similar to high visibility, some risk factors such as favorable water temperature and or dry suit use, tend to increase depth and or dive time, resulting in increased bubbles and DCS cases. When conditions are good, divers tend to do more diving! 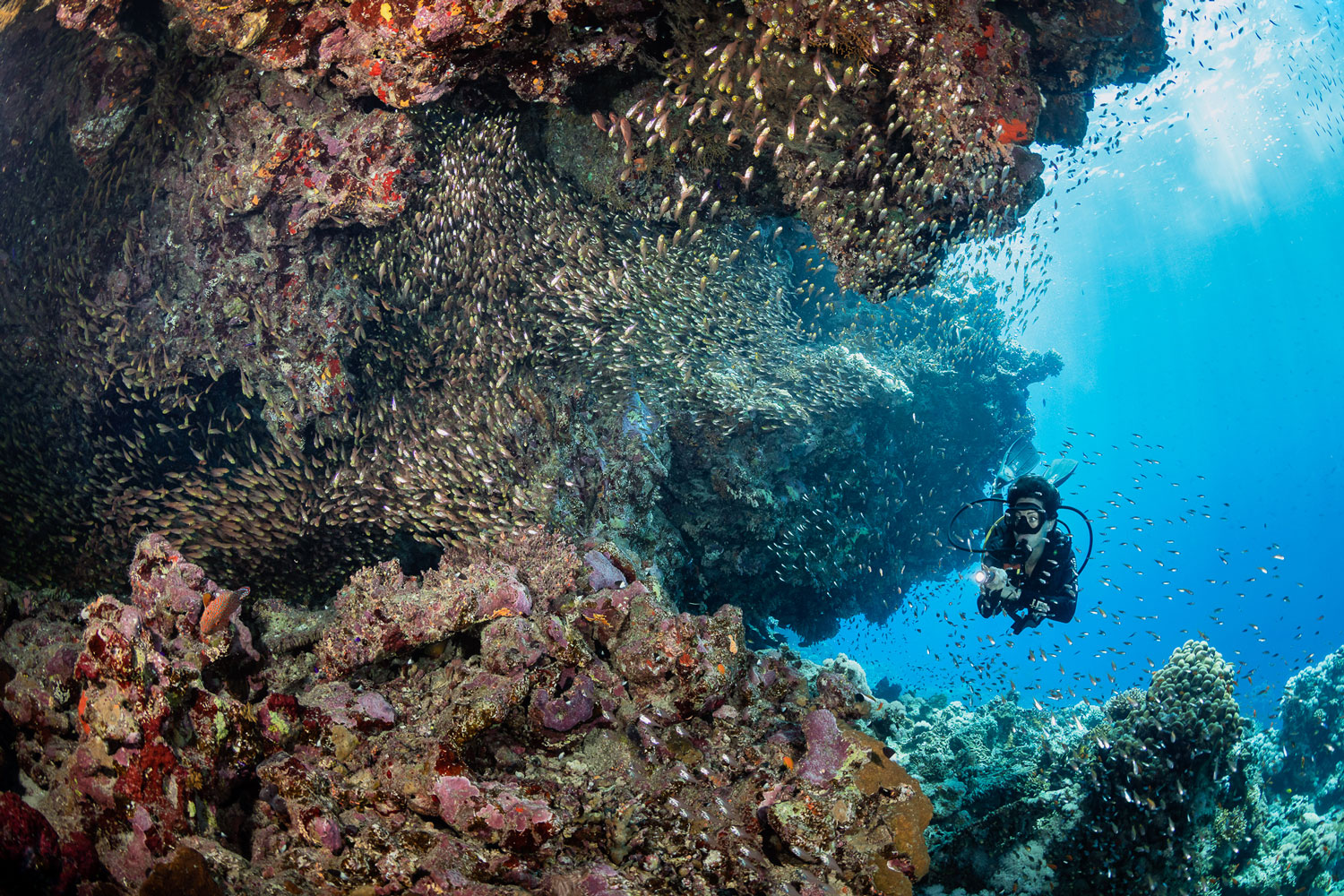 After analyzing the 320 cases of DCS, researchers had to acknowledge once again that current decompression algorithms have a significant “gray area” in their ability to predict DCS. The majority (73.7%) of cases occurred in a GF-value range between 0.70 and 0.90, that is, the diver has correctly followed the indications of the adopted decompression model, without any omission of safety stop, ascent rate etc. This clearly indicates more research is needed as well as a more physiological approach to the problem, as discussed above.

Also telling, all eight “deserved” DCS cases involved fast and slow tissues indicating a better capacity to predict an excess of saturation in these compartment as compared to medium tissues. This was conversely confirmed by the observation that fast compartments were involved in DCS cases in a lower percentage than their incidence as the lead compartment in the total DAN Data Base. The majority of the DCS cases involved medium half-time tissues, think biceps, thighs or calves, with calculated supersaturation levels below “safe” M-values.

These findings led researchers to conclude that we have reached the reliable limit of current dive computing technology. The new frontier, according to researchers, is developing algorithms that can be customized for the user’s physiology, which may eventually lead to computers integrated with real-time physiological sensing technology. 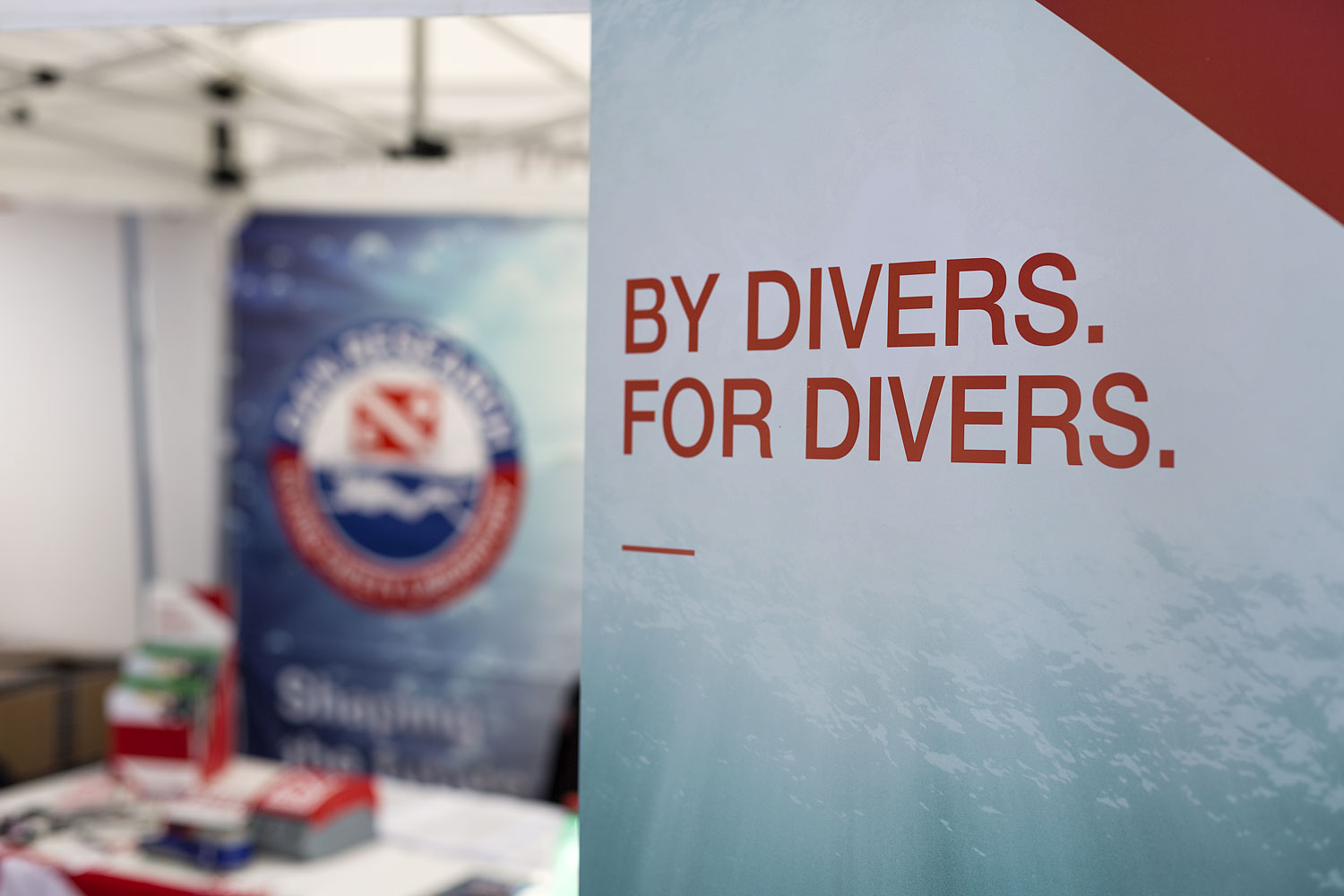 DAN Europe has a series of projects slated to continue the work began with this study. First, the DAN DB now has approximately 5000 dives that include doppler data. Accordingly, researchers plan to revise the study by including more data in the next five years. Second, they plan start collecting more “technical” dive data involving helium breathing gases, rebreathers as well as diver propulsion vehicles. In addition, given surprising new research, confirming circulating bubbles in breath-hold divers, DAN plans to extend its database to include the freediving community.

To facilitate all of these actions, DAN will also be releasing new software tools soon, making it easier for divers to participate in DAN’s data collection efforts. They also hope to eventually apply artificial intelligence (AI) tools to search for patterns in the underlying diving data in a process called data-mining. According to Cristian Pellegrini, who heads DAN Europe’s marketing and communications AI offers a number of opportunities. “The use of AI tools could be a key to new findings,” he said.

[1] Recently-developed hypotheses postulate that inert gas emboli can trigger cell-mediated mechanisms equating DCS to an inflammatory disease (Thom et al., 2015). These hypotheses make the presence of even “silent bubbles” worth considering and investigating to identify further risk factors that may correlate with an increase in the incidence of bubble formation and DCS.