Scuba equipment failure or malfunction is a relatively rare factor in diving-related accidents and fatalities. When it does occur, the most common and hazardous malfunctions involve regulators and buoyancy compensator (BC) power inflators.1 Thus, a recent report to DAN of a regulator failure was not necessarily surprising, but the cause turned out to be quite unusual.

Although the diver involved in the incident managed the situation very well, and no one was harmed, an inexperienced or nervous diver might not have been so fortunate. It was particularly strange that although the diver’s cylinder was not empty, the gas flow had slowed and then ceased in a way that resembled an out-of-air situation. Closer examination of the equipment led to a puzzling discovery: a large amount of yellow ‘crystallized’ material was blocking the inside of the second-stage regulator inlet. The material appears to originate from within the hose, which had been in use for a few years but showed no external abnormalities or signs of deterioration. 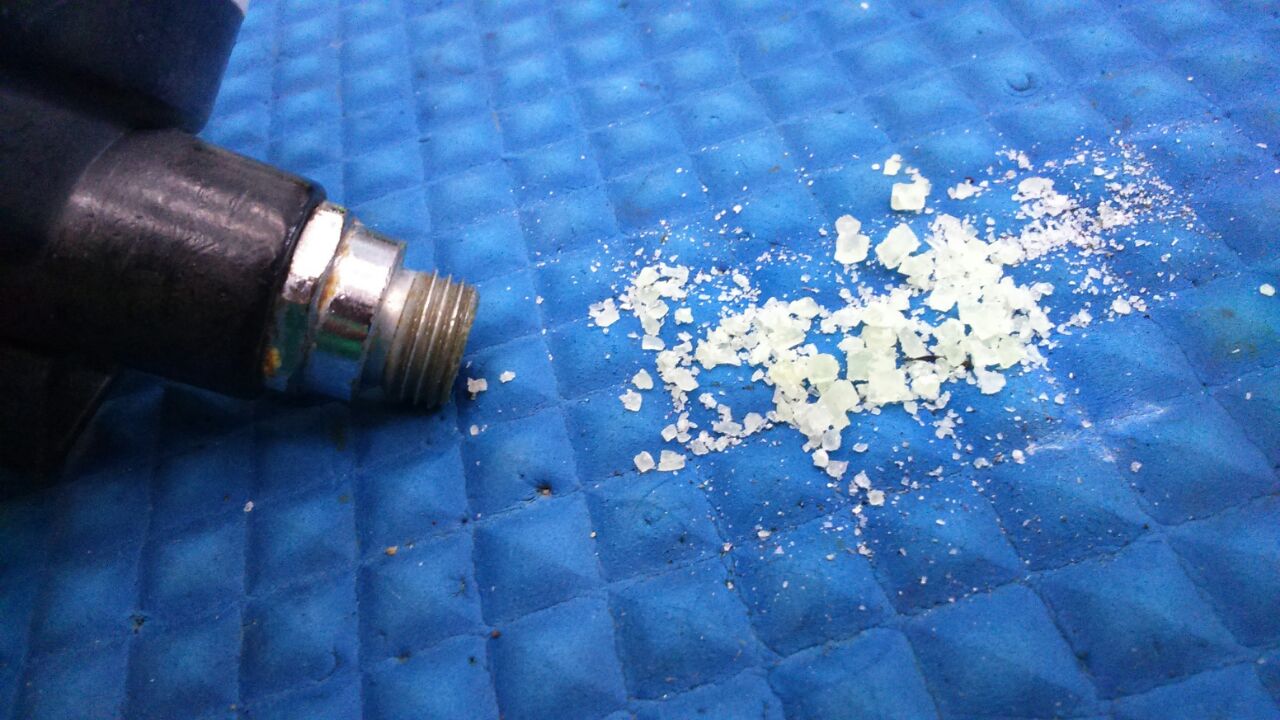 While trying to solve the mystery, we discovered this was not an isolated case. The same situation had been reported in a technical diving blog2, and from hose manufacturers and equipment-servicing workshops in popular diving regions. Although no injuries have been reported, the discovery prompted a wider, global investigation.

When consulted, a major hose manufacturer gave an interesting advice: Hoses do not last a lifetime, and braided hoses in particular should be replaced every five years — or more often if there is clear abrasion or they have spent extended periods in the tropical sun. In addition, some hoses being sold using brand names from reputable hose manufacturers are, in fact, knockoffs.

One avid diver, a specialist engineer at a private company in USA, offered to perform a thorough testing of low-pressure braided scuba hoses. He subjected a variety of hoses to accelerated aging, and the preliminary finding was that hoses with a thermoplastic polyester-polyurethane (polyester-TPU) lining material decayed during testing. This result is consistent with the hose-failure reports DAN has collected. Hoses made of or lined with thermoplastic polyether-polyurethane (polyether-TPU), on the other hand, did not fail.

A well-known European producer of braided hoses, which has always used polyether-TPU, since 2008 has required its materials supplier to certify its polyether-TPU hose linings. 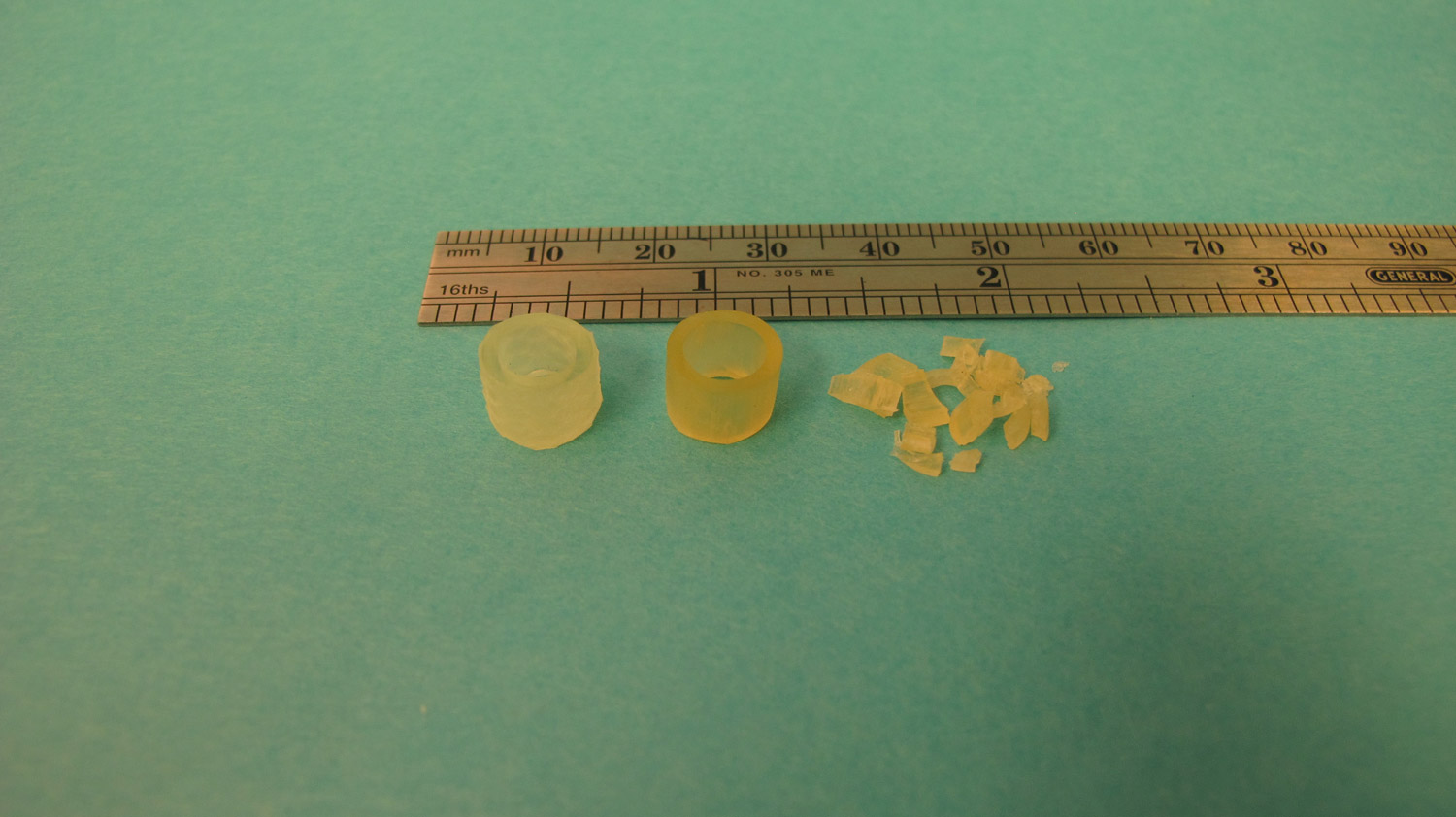 What causes decay of hose linings?

The decay product, a yellow crystalline-looking substance, is softer than it appears and feels waxy when squeezed. The reaction causing decay is actually hydrolysis, which, as its name implies, requires the presence of water. Elevated temperature promotes accelerated degradation or hydrolysis of the polyester-TPU. Repeated cyclical heating and cooling of the hose lining promotes this form of crystallization in materials either unsuitable for this application or affected by certain chemicals or bacteria. The sun heats the hose, then the flow of breathing gas cools down the internal surface of the hose again. This process recurs with each dive, and the ‘crystals’ accumulate over time. Enough ‘crystals’ eventually form to encroach on the gas flow, or they migrate toward the second-stage regulator, resulting in significant failure of the breathing device. 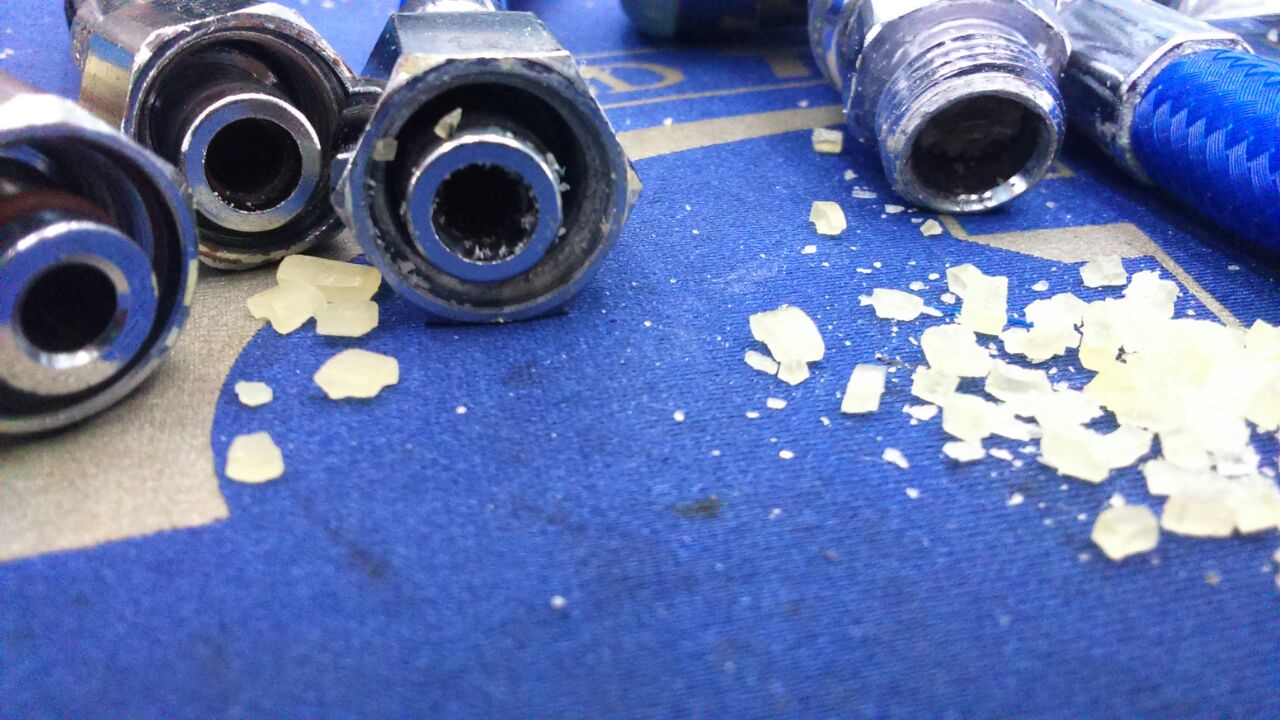 It is hard to predict the time required for a polyester-TPU liner to decay, but available information suggests that at 30°C and high humidity, exposed hoses could decay in less.

Gear manufacturers have been informed about this phenomenon and have carefully investigated their existing suppliers, and implemented improved means of materials verification and quality assurance.

The standard safety recommendation regarding regulator hoses has been that they should be inspected regularly for signs of external deterioration. Disintegration or abrasion of the outer rubber coating eventually predisposes hoses to rupture during pressurization or even when in use. Rubber hoses are quite prone to this condition, which is why polymer-braided hoses were developed. But herein lies the problem: The outside of braided hoses can appear normal, flexible and free from obvious abnormalities, while a deteriorated internal surface would be completely invisible to a cursory external inspection. 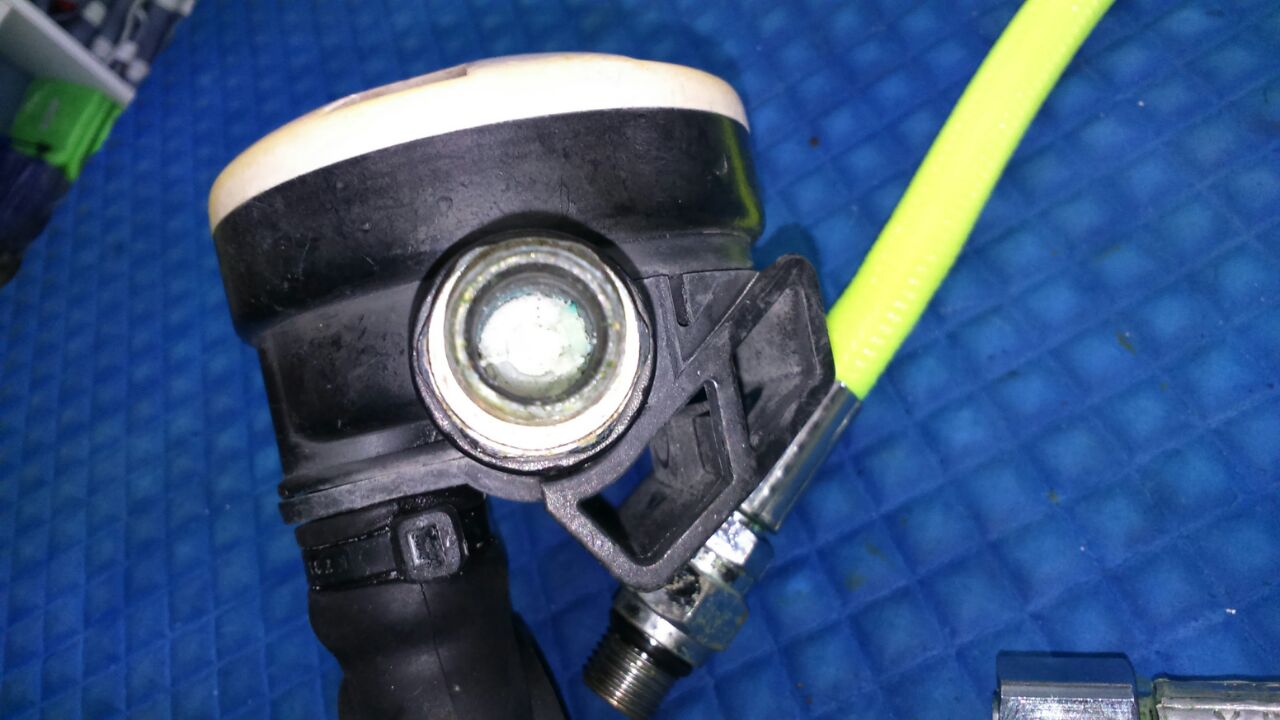 What Does DAN Recommend?

We feel it is important to advise divers as follows:

• All regulator hoses, including braided hoses, have a limited service life regardless of external appearance or reinforcement and protection provided by hose protectors or the braiding itself. The failed hoses we have seen are more than five years old.

• When buying a hose, determine the composition of its lining — you want it to be a polyether-TPU, not a polyester-TPU. If in doubt, do not purchase the hose. Buy your hoses and other life-support equipment from well-known manufacturers that clearly indicate the type of liner material used.

• If there is any indication of gas-flow restriction, particularly when using a newer hose, the diver should immediately stop using the regulator. Perform a careful inspection of the regulator and the hose. If the regulator is not the cause, suspect the hose.

• Physically examine hoses by squeezing them every inch or so to assess whether they exhibit the same degree of flexibility. Any change in resistance while squeezing along the length of the hose would be a sign of a possible problem. This test is much easier to perform with braided hoses than with harder, outer rubberized hoses. 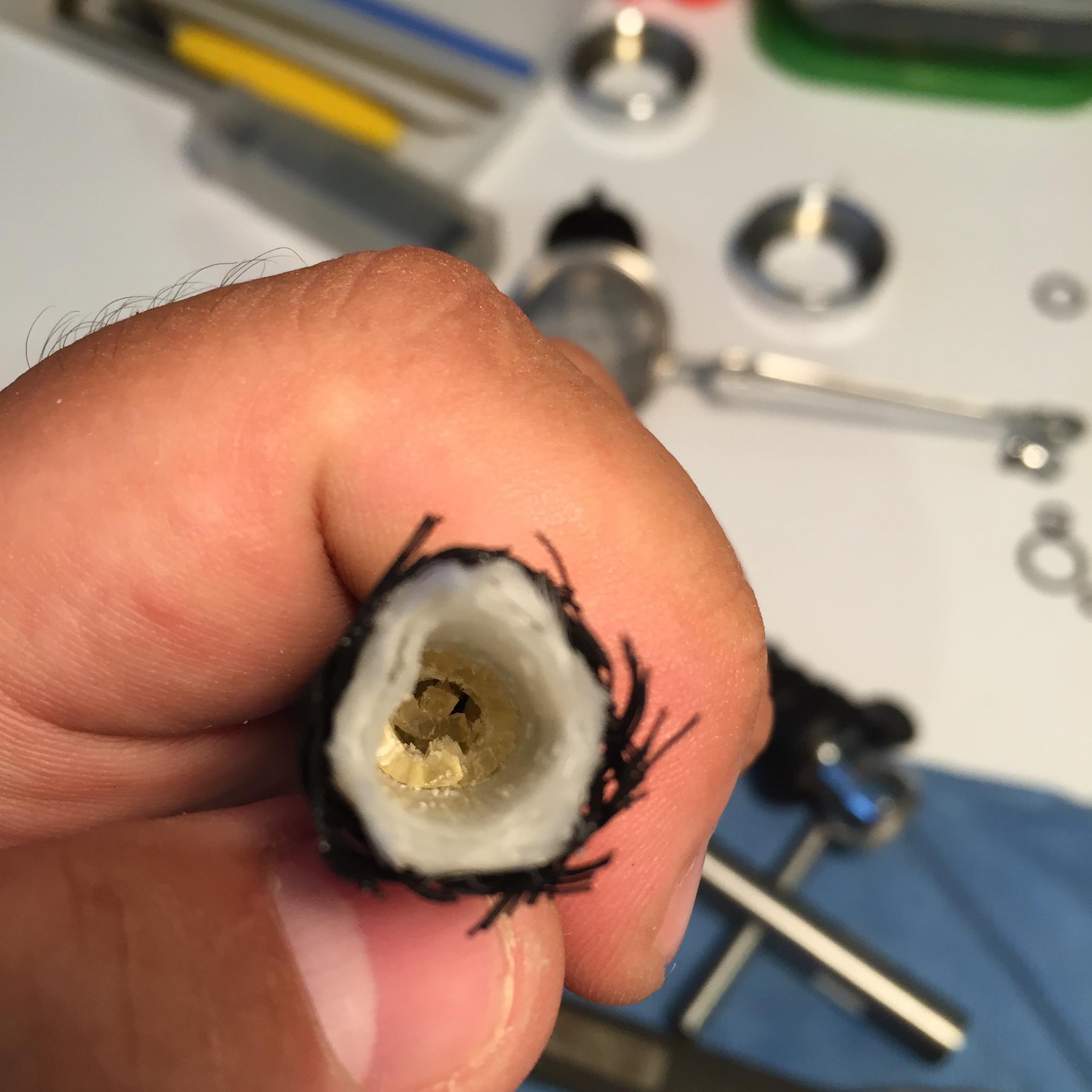 We ask all divers who observe this inner-hose degradation to please email DAN at communications@daneurope.org - preferably providing pictures that show the condition of the hose. This will enable us to capture as much information as possible so we can learn more about this phenomenon. We will share any new findings, cautions and advice with the diving community.