The Seiko Summer Class brought together young divers, educators and researchers, in a unique project combining science and conservation.

The bond between the sea and divers is a deep one, a bond of love, built on wonder and knowledge. However, the sea we are handing over to future generations is likely to be different from the sea we have known. It will be a warmer, acidified sea, impoverished by over-exploitation and climate disruption - there is a lot of talk about this at the moment, with the Youth4Climate conference recently held in Milan, and meetings between politicians and environmental activists ahead of the 26th Climate Change Conference to be held in Glasgow, Scotland later in November 2021. Well, our seas now need particular care and constant monitoring.

It’s an early September morning and the surface waters of the Island of Ustica are close to 30°C. Six young people, aged between 12 and 17 - Eleonora, Marica, Roberta, Alberto, Giuseppe and Riccardo, three girls and three boys - get onto the boat with a precise mission. They arrived from Sardinia the previous day, by sea, and were welcomed in Ustica at the historical headquarters of the Marine Protected Area by Dr. Davide Bruno, Director of the MPA, greeted by videoconference by Prof. Alessandro Marroni, President of DAN Europe, and Ilenia Maffioli, Country Manager of Seiko Italia. Presenting the programme were Fabio Figurella for PADI, and Massimo Casabianca along with Massimo Pieri for DAN Europe.

They all reunite in Ustica for the Seiko Summer Class, a project which stems from the partnership between two diving organisations - PADI, DAN Europe - and Seiko, the iconic manufacturer of timepieces that have been on divers' wrists since 1965, when the first Diver was launched. Seiko has strongly promoted this participated science initiative, true to their philosophy of promoting sustainability and conservation. Among others, the brand also launched a special line of “Save the Ocean” watches, where part of the proceeds are donated to protect endangered marine species.

With the aim of contributing actively to the development of a sustainable society, Seiko has promoted this initiative by expressing in a concrete way its philosophy, an attitude particularly attentive and sensitive to the concept of sustainability.

But let's get back to our six little heroes, who are now plying the shimmering sea on a diving boat, that of Mare Nostrum, a well-known diving operation run by a passionate dive instructor, Tatiana Geloso. They are very serious divers and during their dives they want to put into practice what they have learnt well at the Asinara Camp, one of the initiatives of Scuola d'aMare, sponsored by MIUR (Italian Ministry of Education, University and Research) and the result of the long collaboration between PADI and DAN which has brought scuba diving, marine biology, ecology and environmental education to schools all over Italy - we are talking about over 1000 young students involved. Citizen Science and protection of the marine environment are part of the skillsets of these very young divers. They are in Ustica to collect data as Basic Research Divers, a distinctive PADI speciality created on the basis of DAN Europe extensive experience in the field. For their first dive, they have slates in their hands to record what they observe. The first protocol they follow is an MPA-ENGAGE Visual Census. This involves recording the presence of a dozen fish species considered to be indicators of climate change in the Mediterranean, including the Sparisoma cretense (Parrotfish), and the notorious Siganus spp (Rabbitfish), a voracious herbivore that arrived from Suez. The young divers swim in pairs and very slowly, at about 10 m/minute, disciplined and with impeccable trim. Diligently, they note the key species observed within 2.5 metres. They proceed like little scientists in transects of 50m each. With them are Massimo Casabianca, Massimo Pieri, Fabio Figurella, Luca Occulto (president of the Sette Mari Association and instructor of the Basic Research Diver speciality), marine biologist Cristina Bonino (scientific underwater operator) and Andrea Rovelli, divemaster who grew up as a diver at Asinara Camp and now acts as a tutor in Ustica. 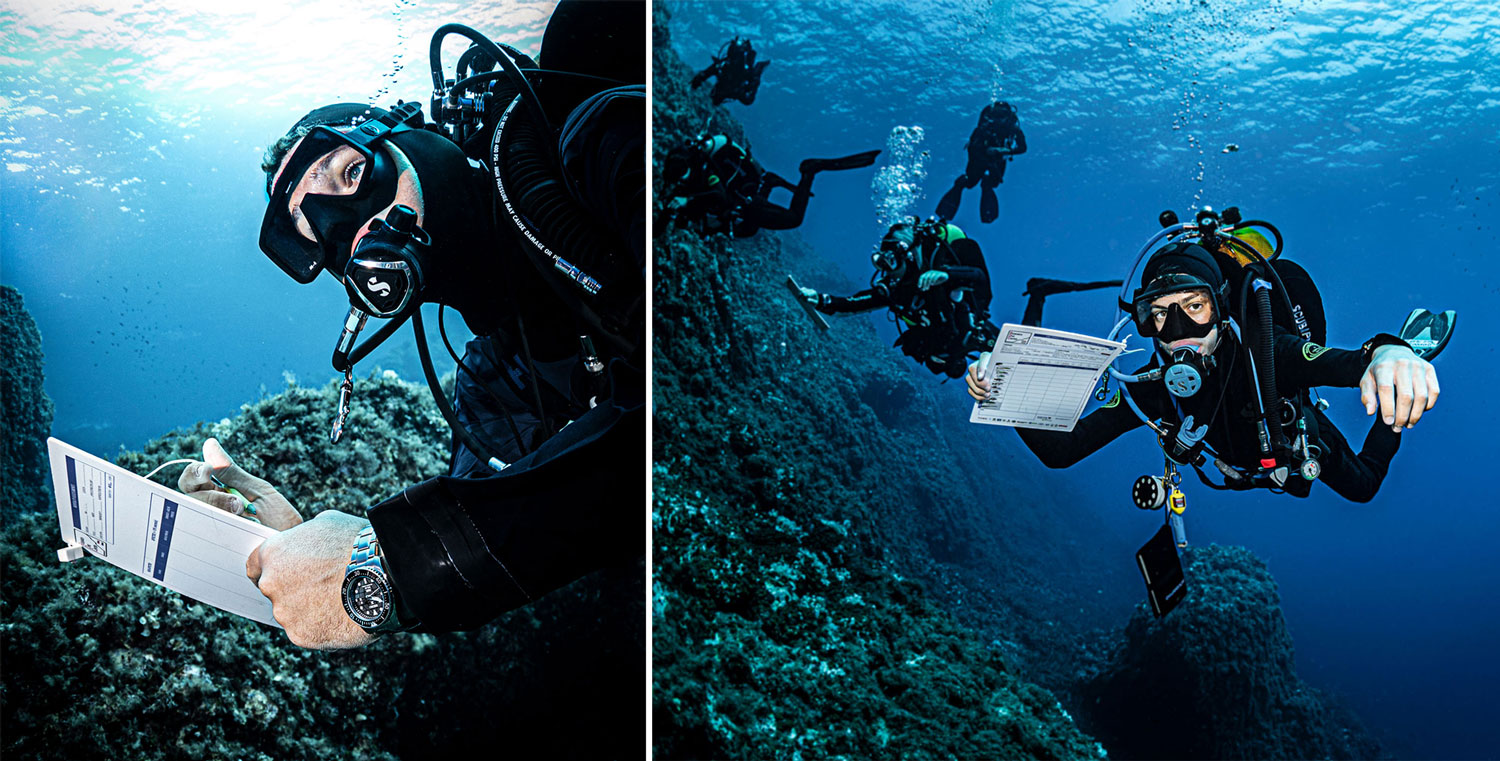 The second dive is a little different. This time they do not fill forms, but test tubes, following the Water Quality protocol. The boys observe the presence of aquatic plants that are particularly sensitive to pollutants and overheating, such as posidonia, and take sea water samples at different depths. The samples are then measured using a bench test with a colorimetric scale and a refractometer to assess their chemical and biological contents, such as microorganisms and density. The results will end up in the DAN Europe Research & Innovation database and will be made available to the scientific community. Having collected the samples, the boys returned to the surface, but their mission was not over. Massimo Pieri of DAN Europe is waiting for them to carry out a Doppler test with a O'Dive unit, a sensor that detects circulating micro-bubbles in the diver's venous system after the dive. The signal is recorded and then transmitted to a server for analysis. The amount of micro-bubbles detected is used to calculate the Dive Quality Index (IQ). They take four measurements in all, each lasting 20 seconds, 30 and 60 minutes after the dive. It's an extremely simple test and guided by the Doppler unit, so much so that the trained diver is able to use it independently, with feedback available within minutes. A tool that, as Casabianca points out, we would have needed years ago, when I myself and him were both instructors in the Red Sea and our days were particularly busy and punctuated by many repetitive dives.

We lunch on board and then return to base, where our heroes' day continues at the DAN Europe Research Lab: there are still data and dive profiles to collect and process! 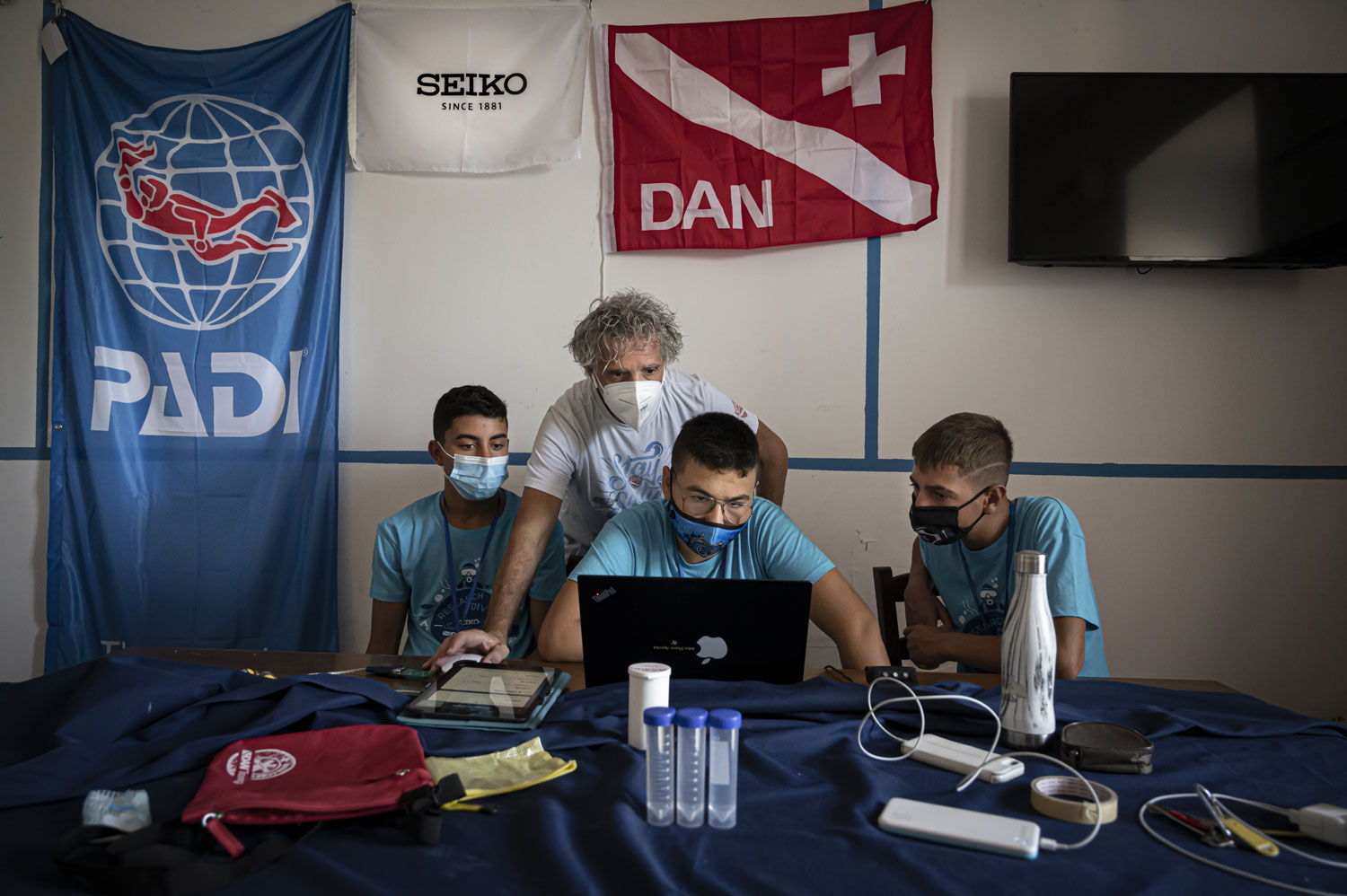 The following day the divers continue to collect data, with the commitment of true researchers, on the boat in the morning and then deep down, immersed in a water environment that considered by many to be the most beautiful and best preserved on this side of the Mediterranean. On the third day, an outsized storm hit the island, almost as yet another reminder that the Earth climate need attention, so in the end activities had to be suspended. The young divers continued their mission anyway by snorkelling in more protected, confined waters. As a matter of fact, measurements taken in the first three metres of the water column are among the most important.

This incredible experience has now come to an end, the boys and girls are ready to leave, aware that they have contributed to something important. They collected data that will be useful for climate change adaptation policies, as well as data useful for diving safety. Seiko rewarded them individually, by giving to all participants a prestigious watch: the Seiko Prospex Diver, designed in collaboration with PADI. 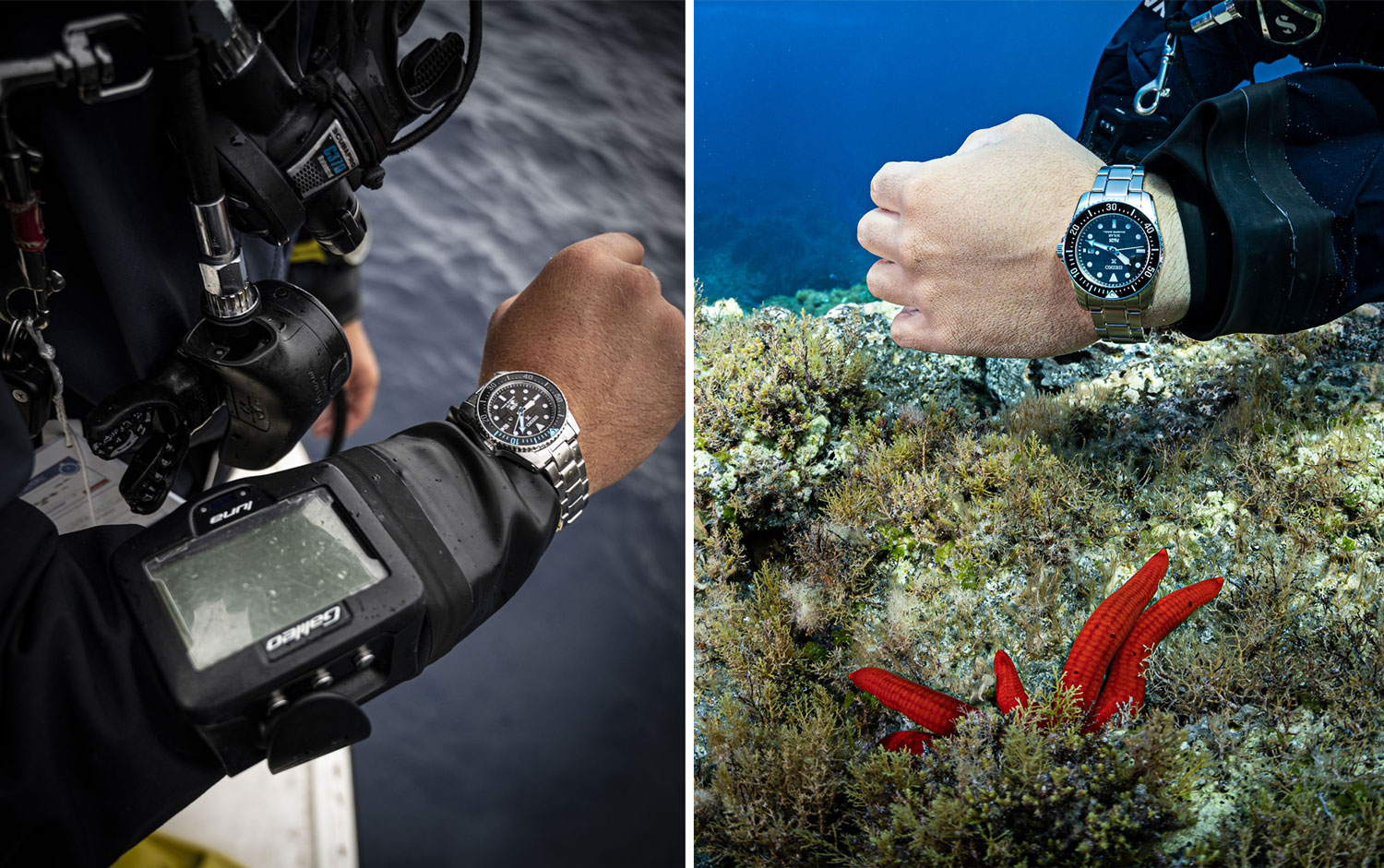 The initiative by DAN Europe, PADI and Seiko confirms that the diving industry, which includes passionate educators, students, training agencies, as well as safety & research organisations, is one of the most committed to safeguarding our oceans, keeping alive the desire to preserve their beauty and purity - with gestures of love and gratitude.